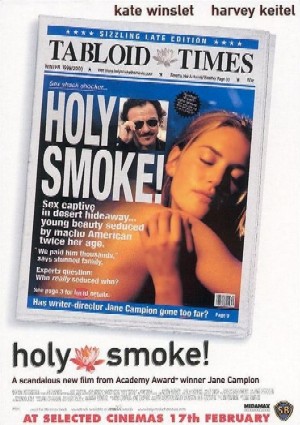 "Holy Smoke!" is a 1999 n directed by , who co-wrote the screenplay with her sister Anna. It premiered at the and was shown at the and the before being released theatrically.

During a trip to , Ruth Barron has a spiritual awakening and embraces the teachings of a guru named Baba. Back home in the of Sans Souci, her parents are appalled to learn their daughter now answers to the name Nazni and has no intention of returning. They concoct a tale about her father Gilbert having had a and being on the verge of death, and her mother Miriam travels to India in hopes of convincing her to come home, with no success until she suffers a serious asthma attack. Ruth agrees to accompany her on her return flight.

Miriam arranges a reunion with Gilbert, who supposedly is recuperating in the , and this charade lands Ruth in the clutches of P.J. Waters, an American exit counselor who deprograms members of religious cults. In a remote cabin, he isolates Ruth, separates her from her and religious props, challenges her faith in Baba, and slowly wears her down. As she begins to weaken, Waters finds himself sexually attracted to her, and in time Ruth allows him to seduce her. She then turns the tables on him, as she discovers her sexuality allows her to make mincemeat of his long-held beliefs as a macho, misogynist male.

The film was made on location in and in and Sydney and Hawker in the in . Interiors were filmed at .

In her review in the "", said, "As "Holy Smoke" moves from its early mix of rapture and humor into [the] more serious, confrontational stage, it runs into trouble . . . the screenplay . . . threatens to become heavy-handedly ideological beneath its outward whimsy . . . it turns out to be more fundamentally conventional than might be expected . . . Shot so beautifully by Dion Beebe that it seems bathed in divine light, [the film] has a sensual allure that transcends its deep-seated ponderousness. The richly colored Indian scenes have a magic, while exquisite desert vistas radiate an attunement with nature. And the steamily claustrophobic look of the intense scenes between Ms. Winslet and Keitel have an that will not surprise viewers of ""." [ [http://www.nytimes.com/library/film/100899smoke-film-review.html "New York Times" review] ]

of the "" observed, "It's a little surprising, although not boring, when it turns from a mystic into a feminist . . . Winslet and Keitel are both interesting in the film, and indeed Winslet seems to be following Keitel's long-standing career plan, which is to go with intriguing screenplays and directors and let stardom take care of itself . . . A smaller picture like this, shot out of the mainstream, has a better chance of being quirky and original. And quirky it is, even if not successful." [ [http://rogerebert.suntimes.com/apps/pbcs.dll/article?AID=/20000211/REVIEWS/2110304/1023 "Chicago Sun-Times" review] ]

In "Variety", David Rooney stated, "Original in every sense, this often difficult film about family, relationships, sexual politics, spiritual questing, faith and obsession further explores the director's abiding fascinations in excitingly unconventional terms. Mainstream audiences may be unwilling to surrender to the pull of a unique journey that strips away its characters' masks and refuses easy solutions, and many men especially will find it too confronting. But others will embrace its thematic and stylistic complexity as qualities all too rare in contemporary cinema." [ [http://www.variety.com/review/VE1117752088.html?categoryid=31&cs=1&p=0 "Variety" review] ]

At the Venice Film Festival, Jane Campion and Kate Winslet won the Elvira Notari Prize. Campion was nominated for the but lost to for "".

*
*
* [http://colsearch.nfsa.afc.gov.au/nfsa/search/display/display.w3p;adv=yes;group=;groupequals=;holdingType=;page=0;parentid=;query=540989;querytype=;rec=0;resCount=10 "Holy Smoke!" at the National Film and Sound Archive]