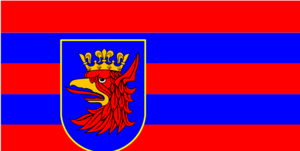 Szczecin is located on the , south of the and the . The city is situated along the southwestern shore of , on both sides of Oder and on several large islands between western and eastern branch of the river. Szczecin borders with Police - a district town situated at an of the .

The city is on the .

After the decline of Wolin in the 12th century, Szczecin became one of the more important and powerful seaports of the Baltic Sea south coasts, with population of some 5,000 inhabitants. In 1121–1122 the city came under the influence of who invited the Catholic bishop to baptize its citizens. The mission was carried out in 1124. This second period of Polish feudal sovereignty over the Western Pomerania and Szczecin lasted 60 years (1121-1181). Wartislaw I, Duke of Pomerania is recorded to be the local duke. Wartislaw managed to expand his duchy westward, thereby forming the territorial body of the later , and organized the second visit of Otto in 1128. At this time the first Christian church of St. Peter and Paul was erected. The duchy was for the centuries being ruled by the "Griffins" dynasty (), of which Wartislaw I is the first definite ancestor. Stettin was made the capital of the duchy and did not lose this status even during the partitions of Pomerania, when Pomerania-Stettin comprised large portions of the duchy and always was seat of Pomeranian dukes. As a result, Stettin was chosen to stay capital even in the Prussian set up after the 1637 death of the last Pomeranian duke. see|Dukes of Pomerania

In the second half of the 12th century, a group of German tradesmen (from various parts of the ) settled in the city around St. Jacob's Church, which was founded by Beringer, a trader from , and consecrated in 1187. After the 1164 Verchen battle, Stettin dukes joined in to Saxony and in 1181 Stettin became part of the Holy Roman Empire. For centuries the dukes invited West and Central German settlers to colonize Pomeranian wastelands and to found towns and villages ("see "). Duke Barnim of Pomerania granted a local government charter to this community in 1237, separating the Germans from the Slavic majority community settled around the St. Nicholas Church (in the neighborhoods of Chyzin, Uber-Wiken, and Unter-Wiken). Barnim granted Stettin in 1243. Around that time the major ethnic group of the city had become German, while the Slavic population decreased.

Stettin joined the in 1278. By the 1630s the city and surrounding area that hadn't been already German had become completely Germanized.

After the extinction of the Griffits dynasty, Stettin, along with the rest of Western Pomerania, was granted to Sweden at the (1648), despite the protests of Elector Frederick William of , who had a legal claim to inherit all of Pomerania. In 1720 after the , the Swedes were forced to cede the city to King . Stettin developed into a major Prussian city and became part of the Prussian-led in 1871. In 1939 Stettin had about 400,000 inhabitants. It was 's third-biggest seaport (after and Bremen) and was of great importance for the supply and trade of . Cars of the automobile company were produced in Stettin from 1899 - 1945.

In 1935 the German made Stettin the headquarters for , which controlled the military units in all of and Pomerania. It was also the Area Headquarters for units stationed at Stettin I and II; ; ; and . During the 1939 invasion of Poland, which started World War II in Europe, Stettin was the base for the , which cut across the . Allied air raids in 1944 and heavy fighting between the German and Soviet armies destroyed 65% of Stettin's buildings and almost all of the city centre, seaport and industries.

The Soviet captured the city on , . Many of the city's inhabitants fled before its capture, and Stettin was virtually deserted when it fell. In the following month the city was handed over to Polish administration three times, permanently on , . In the meantime part of the German population had returned, believing it might become part of the Soviet occupation zone in Germany. Stettin is located mostly west of the , which was to be Poland's new border according to the . However, most of Pomerania, including all of Stettin and the mouth of the Oder River, was awarded to Poland.

The Polish authorities were led by Piotr Zaremba. Many of the remaining Germans were forced to work in Soviet military camps that were outside of Polish jurisdiction. In the early 1950s, most of Stettin's Germans were expelled from the city, although there was a significant German minority for the next 10 years.

In 1945 the Polish community in Stettin consisted of a few citizens from the pre-war population as well as forced laborers from the . The city's German population was expelled and Stettin was resettled with , many of whom came from around and , where their homes had been destroyed under the German occupation and the fighting during the . Additional Poles were moved to the city from . This settlement process was coordinated by the city of Poznań, and Stettin's name was changed to the Polish name Szczecin. In 1947, after , a significant number of Ukrainians came to Szczecin, having been forced by the Communist government to leave eastern Poland.

The new citizens of Szczecin rebuilt and extended the city's industry and industrial areas, as well as its cultural heritage, although efforts were hampered by the authorities of Communist Poland. Szczecin became a major industrial centre for Poland, as well as an important seaport for Poland (especially for n coal), , and . The city witnessed anti-communist revolts in 1970 and 1980 and participated in the growth of the movement during the 1980s. Since 1999 Szczecin has been the capital of the .

Szczecin's architectural style is mainly influenced by those of the last half of the 19th century and the first years of the 20th century: and . In many areas built after 1945, especially in the city centre, which had been destroyed due to Allied bombing, is prevalent.

Urban planning of Szczecin is unusual. The first thing observed by a newcomer is abundance of green areas: s and avenues &ndash; wide streets with trees planted in the island separating opposite traffic (where often tracks are laid); and roundabouts. This makes Szczecin's city project quite similar to that of . The reason is, Szczecin (like Paris) was rebuilt in the 1880s using a design by Georges-Eugène Haussmann.

This course of designing streets in Szczecin is still used, as many recently built (or modified) city areas include roundabouts and avenues.

Within Szczecin's boundaries is part of the called in the forest of Puszcza Bukowa.

The city is administratively divided into boroughs (Polish: "dzielnica"), which are further divided into smaller neighbourhoods. The governing bodies of the latter serve the role of auxiliary local government bodies called "Neighborhood Councils" (Polish: "Rady Osiedla"). s for Neighborhood Councils are held up to six months after each City Council elections. Attendance is rather low (on it ranged from 1.03% to 27.75% and was 3.78% on average). s are responsible mostly for small infrastructure like trees, park benches, s, etc. Other functions are mostly advisory. [http://www.szczecin.pl/rada/rady/adres.htm Official list of districts]

Szczecin has three shipyards (, , ), of which one is the biggest in Poland (Stocznia Szczecińska, which five years ago went bankrupt and was reinstated. It has a fishing industry and a steel mill. It is served by and by the , third biggest port of Poland. It is also home to several major companies. Among them is the major food producer , , producer of construction materials Komfort, Bosman brewery and drug factory. It also houses several of the "new business" firms of the IT branch.

There is a popular public transit system operating throughout Szczecin including a bus network and electric trams.

There are many popular professional sports team in Szczecin area. The most popular sport today is probably football (thanks to just promoted to play in the 1st league in season 2004/2005). Amateur sports are played by thousands of Szczecin citizens and also in schools of all levels (elementary, secondary, university).