Marble Palace (Мраморный дворец) is one of the first Neoclassical palaces in Saint Petersburg, Russia. It is situated between the Field of Mars and Palace Quay, slightly to the east from New Michael Palace.

The palace was built by Count Grigory Orlov, the favorite of Empress Catherine the Great and the most powerful Russian nobleman of the 1760s. Construction started in 1768 to designs by Antonio Rinaldi, who previously had helped decorate the grand palace at Caserta near Naples. The combination of sumptuous ornamentation with rigorously classicizing monumentality, as practiced by Rinaldi, may be attributed to his earlier work under Luigi Vanvitelli in Italy.

The palace takes its name from its opulent decoration in a wide variety of polychrome marbles. A rough-grained Finnish granite on the ground floor is in subtle contrast to polished pink Karelian marble of the pilasters and white Urals marble of capitals and festoons. Panels of veined bluish gray Urals marble separate the floors, while Tallinn dolomite was employed for ornamental urns. In all, 32 disparate shades of marble were used to decorate the palace.

The plan of the edifice is trapezoidal: each of its four facades, though strictly symmetrical, has a different design. One of the facades conceals a recessed courtyard, where an armored car employed by Lenin during the October Revolution used to be mounted on display between 1937 and 1992. Nowadays, the court is dominated by a sturdy equestrian statue of Alexander III of Russia, the most famous work of sculptor Paolo Troubetzkoy; formerly it graced a square before the Moscow Railway Station. 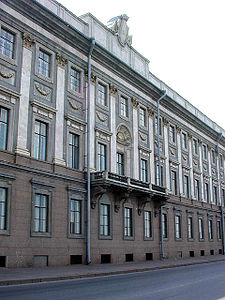 Façade of the Larger Marble Palace. For a night view see here.

Fedot Shubin, Mikhail Kozlovsky, Stefano Torelli and other Russian and foreign craftsmen decorated the interior with inlaid coloured marbles, stucco, and statuary until 1785, by which time Count Orlov fell out of favour with the Empress, who had the palace purchased for her own heirs. In 1797–1798 the structure was leased to Stanisław August Poniatowski, the last king of Poland. Thereafter the palace belonged to Grand Duke Constantine Pavlovich and his heirs from the Konstantinovichi branch of the Romanov family.

In 1843, Grand Duke Constantine Nikolayevich decided to redecorate the edifice, renaming it Constantine Palace and engaging Alexander Brullov as the architect. An adjacent church and other outbuildings were completely rebuilt, while the interior of the palace was refurbished in keeping with the eclectic tastes of its new owner. Only the main staircase and the Marble Hall survived that refacing and still retain the refined stucco work and elaborate marble pattern of Rinaldi's original decor.

During the Soviet era, the palace successively housed the Ministry of Labour (1917–19), the Academy of Material Culture (1919–36), and the Lenin Museum (1937–91). Currently, the palace accommodates permanent exhibitions of the Russian State Museum, notably "Foreign Artists in Russia (18th and 19th centuries)" and the "Peter Ludwig Museum at the Russian Museum", featuring canvases by Andy Warhol and other Pop Art idols.