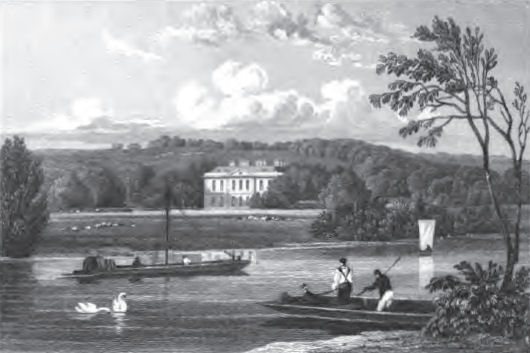 thumb|Fawley Court, circa 1826----">From "Views of the seats of noblemen and gentlemen in England, Wales, Scotland and Ireland", Second Series, Volume III, by John Preston Neale, 1826Fawley Court stands on the banks of the at Fawley in the English county of , just north of . The former deer park extended over the border into . [ [http://www.british-history.ac.uk/report.aspx?compid=42525 British History Online, "s.v." Fawley"] ]

The site was already occupied before the : under the manor of Fawley was held by Earl Tosti. The name "Fawley" comes from the word for . It is located about half way along the course.

After the Conquest, Fawley Manor was given by William I to his kinsman , who was one of the leading compilers of the . His steward Herbrand de Sackville was holding it in 1086, and the Sackvilles held it until it passed through the marriage of the Sackville heiress Margery, to Thomas Rokes, in 1477.

In 1616, Fawley was sold to Sir , a who also bought and . His son, Sir , was a parliamentarian and also a judge. During the Civil War, Fawley was the scene of fighting between the and Royalist troops commanded by . Since Bulstrode Whitelocke was a Parliament supporter, Royalist soldiers quartered in the house under Sir John Byron ransacked it in 1642. [ [http://www.british-history.ac.uk/report.aspx?compid=42525 British History Online, "s.v." Fawley"] ]

The house was completely rebuilt for William Freeman, a plantation owner and merchant, in 1684. [Attributions to Sir made by the local historian R. H. Whitelocke, "Memoirs of Burstrode Whitelocke", and in the "Victoria County History of England" are not supported by documents or patronage pconnections and are ignored by recent architectural historians.] The resulting house is a large square brick and stone house of two stories in height, with a basement and an attic. The symmetrical plan is ranged either side of an entrance hall entered from the west, with the identically-proportioned saloon beyond; the principal apartments and staircases are placed in equal-sized blocks on either side, projecting slightly on the west and east fronts. The stair hall in the southwest block opens from the entrance hall; it has twist-turned balusters typical of the late seventeenth century. The centres of the north and south fronts are slightly broken forward and capped with pediments. There is an Ionic entrance portico on the west front. [ [http://www.british-history.ac.uk/report.aspx?compid=42525 British History Online, "s.v." Fawley"] ]

During the of 1688, stayed in the house during his march from to London, and received a loyal declaration from peers and an address from the Corporation of London. Interior finishing was ongoing however, for the plasterwork of the Saloon ceiling bears the date 1690; bearing the arms of Freeman and of Baxter, William's spouse its confident bold relief tempted Geoffrey Beard to ascribe it to the London plasterer William Parker, whose comparable work at is documented. [Geoffry Beard, "Decorative Plasterwork in Great Britain"(London: Phaidon) 1975:52.]

Following William Freeman's death the estate passed to John Cooke his nephew, a merchant, dilettante and amateur architect, who according to the terms of William's will changed his name to John Freeman. He was an early member of the Society of Antiquaries, built the Gothic folly in the grounds and the Freeman family mausoleum in the nearby village of Fawley based on the design of the tomb of Caecilla Metella in Rome. He buried a time capsule of contemporary artefacts in a mound resembling a round barrow on the estate. These were rediscovered in the early 20th century when the site was excavated by archeologists. Examples of day to day household items of the early 18th century they are now to be seen in the in nearby Henley on Thames.

Strickland Freeman, the son of Sambrooke wrote some early works on equitation and veterinary aspects of horsemanship and botany. A very progressive landlord to his agricultural tenants he participated in advancing faming techniques and practices deemed by some to have been revolutionary.

Strickland Freeman died without a son and heir. This was basically the end of the Freeman line whose history and achievements in a relatively short time frame were indeed meritorious and make fascinating reading ( Fawley Court and the Freeman Family - 1971) The estate passed to the Williams family, distant relatives. They again respected William Freeman's will to be able entitled inherit and changed their name to Williams-Freeman. After extensive and lengthy litigation the Williams-Freemans eventually put the estate up for auction.

Fawley Court was sold to the Scottish banker and railway entrepreneur in 1853. He purchased and retired to Fawley following many successful ventures developing major stages of the railway network in France after the ill health and death of his partner and brother the famous civil engineer and railway builder . Edward enlarged the house, adding the north east wing in 1884. It is reputed to have been 's inspiration for Toad Hall in his book "", written in 1908.

The house was requisitioned by the Army in , and was used as a training camp, leaving it in a poor state after the war. In 1953 the house and surrounding park were purchased by the , to be used as a school, , for Polish boys. At its peak the school catered for 150 boys, aged 9 to 19, mostly the children of Poles displaced during the Second World War who had found refuge in Britain. The house was severely damaged by fire in the early 1970s, but was rebuilt with the help of donations from the Polish community overseas. A modern church was also built on the grounds, funded by Prince (best known as husband of -Radziwill, the younger sister of ); he died in 1976 and was interred in the church's crypt. The school closed down in 1986 due to a lack of students of Polish origin, and the Marian Fathers converted Fawley Court into a 'Retreat and Conference Centre'. In 2008 the Marian Fathers, to the chagrin and dismay of the older members of the Polish Community in the UK, put the estate, considered by some to forming part of the Polish community's history, roots and heritage in the UK, on the market by informal tender. [ [http://www.henleystandard.co.uk/news/news.php?id=428279 Forced to sell Fawley Court] , "", 25 April 2008] They had deemed that there was no longer any missionary need to fulfill and that the proceeds of the sale could be better applied elsewhere. The Polish Community is following developments closely with bated breath.