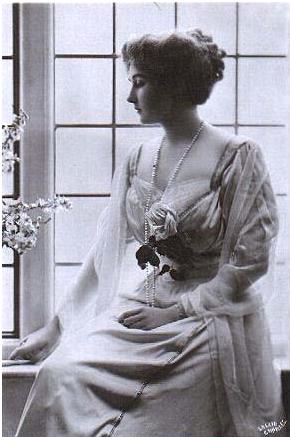 Princess Patricia of Connaught (Victoria Patricia Helena Elizabeth; later Lady Patricia Ramsay; – ) was a member of the , a granddaughter of Queen Victoria. She relinquished her title of a and the style of "Her Royal Highness" upon her marriage to the commoner Alexander Ramsay.

The infantry regiment, , was named in her honour.

Princess Patricia — "Patsy" to family and friends — was born on 17 March 1886, , at in . Her father was , the third son of Queen Victoria and . Her mother was Princess Luise Margarete of Prussia. She had two elder siblings, and , later Crown Princess Margaret of Sweden. She was christened "Victoria Patricia Helena Elizabeth" at on and her godparents were , Princess Christian of Schleswig-Holstein, the Hereditary Grand Duchess of Oldenburg, Prince Wilhelm of Prussia, the Duke of Saxe-Coburg and Gotha and . She was named Victoria after Queen Victoria; Patricia, after , the saint of her birthday; and Helena, in honour of her father's sister.

Princess Patricia travelled extensively in her early years. Her father, the Duke of Connaught, was posted to India with the army, and the young Princess spent two years living there. Connaught Place, the central business locus of New Delhi, is named for the Duke. In 1911, the Duke was appointed . Princess Patricia accompanied her parents to Canada, and she became extremely popular there.

She was named Colonel-in-Chief of on and held that appointment until her death. The regiment was named after her. Princess Patricia personally designed the badge and colours for the regiment to take overseas to France. As the regiment's Colonel-in-Chief, she played an active role until her death. She was succeeded in 1974 by her cousin and goddaughter Patricia (the Rt. Hon. Lady Brabourne), who became the Countess Mountbatten of Burma, who asked that the men and women of her regiment discount her titles and refer to her in honour of her predecessor as Lady Patricia.

House of Saxe-Coburg-Gotha|albertgThe question of Patricia's marriage was a hot topic of conversation in Edwardian times. She was matched with various foreign royals, including the King of Spain and the future King of Portugal; the future Grand Duke of Mecklenburg-Strelitz [cite news | title = PRINCESS PAT" ENGAGED?; Grand Duke of Mecklenburg-Strelitz Said to be Her Fiance. | pages =4 | publisher = | date = ] and Grand Duke Michael of Russia, younger brother of Nicholas II.

In the end, however, Patricia chose a commoner rather than a husband of royal blood. She married naval Commander (later Admiral) The Hon. Alexander Ramsay ( – ), one of her father's aides de camp, and third son of the Earl of Dalhousie. She was married at on . On her wedding day, Princess Patricia of Connaught voluntarily relinquished the style of and the title of and assumed the style of "Lady" Patricia Ramsay with precedence immediately before the Marchionesses of England.

Despite her relinquishment of her royal title, Lady Patricia remained a member of the , remained in the line of succession, and attended all major royal events including weddings, funerals, and the s of George VI and Elizabeth II in 1937 and 1953 respectively.

Lady Patricia was an accomplished artist specializing in s. Much of her work was inspired by her travel in tropical countries. Her style was influenced by Gauguin and Van Gogh, because she had studied under A.S. Hartrick who had known the artists. She died at Ribsden Holt, , before her 88th birthday and a year and a half after her husband. She was the younger one of only two surviving female grandchildren of Queen Victoria. Lady Patricia Ramsay and Admiral Alexander Ramsay are buried at Royal Burial Ground, directly behind the Royal Mausoleum of her grandparents Queen Victoria and Prince Albert, in Windsor Great Park.

with a label for difference, blazoned thus: "Quarterly (by quarters):

The whole differenced by a Label of five points Argent, first and fifth with a "cross gules", the others "fleurs-de-lys azure". [ [http://www.heraldica.org/topics/britain/cadency.htm Heraldica – British Royalty Cadency] ]