Henri Coandă International Airport (Romanian: Aeroportul Internaţional Henri Coandă) (IATA: OTP, ICAO: LROP) is Romania's busiest international airport, located 16.5 km (10.3 mi) northwest[1] of the city of Bucharest, within Otopeni city limits. One of two airports serving the Romanian capital, the other being Băneasa, it is named after Romanian flight pioneer Henri Coandă, builder of Coandă-1910 aircraft and discoverer of the Coanda effect of fluidics. Until May 2004, the official name was Bucharest Otopeni International Airport (Romanian: Aeroportul Internaţional Bucureşti Otopeni), which remains the name by which it is generally known. The military section of the airport is currently used by the 90th Airlift Flotilla of the Romanian Air Force. The airport is managed by Aeroporturi Bucureşti Company. 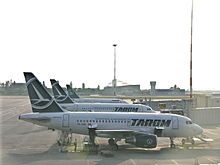 Bucharest OTP is TAROM's main base 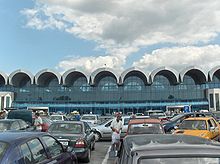 During World War II, the airport in Otopeni was used as an airbase by the German air force. Up to 1965, it was restricted for military use, and was one of the major bases of the Romanian Air Force, with a runway of 1200m. Before 1965, Băneasa Airport was the only airport that Bucharest used for commercial flights. However, with the growth of air traffic, a new commercial airport was constructed in the settlement of Otopeni, where the military air base used to be. The existing runway was modernised, extended up to 3500 m, making it one of the longest in Europe at that time (1965). Also, a new passenger terminal was constructed for domestic and international flights.

In the late 1960s, when President Nixon of the United States visited Romania, a new VIP lounge was created, and on 13 April 1970, the passenger terminal was updated to have a capacity of 1,200,000 passengers per year. The airport slowly became more and more used by airlines, with a growing number of passengers, and in 1986, it entered a new phase of development. A second 3500-metre runway was constructed, as well as related taxiways. The airport lighting system was improved and the capacity was increased to 35-40 airport movements per hour.

In 1992, Otopeni Airport became a regular member of Airports Council International (ACI). In the same year a long-term, multi-stage upgrade plan was devised, anticipating a sharp increase in traffic as traveling restrictions to and from Romania were lifted. The first stage of the plan (Phase I), taking place between 1994 and 1999, involved the construction a new departures terminal and of a new airside concourse with 5 jetways and 9 gates (referred to as 'the Finger') as well as the extension of various airport ramps and of their associated taxiways. [2]

The second phase (labeled Phase II/IIe) of the plan led to the construction of a terminal dedicated to domestic flights and of a multi-story car park (2003), the complete overhaul of the control tower (between 2005-2007) as well as the transformation of the old terminal building in a dedicated arrivals hall (in 2000). During the same phase, two new high-speed taxiways (Oscar and Victor) were constructed. Phase II was completed in 2007.[3]

The third stage of the plan (Phase III), started in 2009, involves the extension of the airside concourse ('the Finger') to 24 gates and 14 jetways, as well as the expansion of Departure Hall and Arrivals Hall in order to raise the capacity of the airport to 6 million passengers yearly. The airside concourse was inaugurated on 29 March 2011.[4]

The airport has ILS CAT IIIb status on runways 08R and 08L.

The airport is currently undertaking Phase III of its development program, a €150 million investment, which consist of the expansion of Departure Hall, Arrivals Hall and the concourse. At the end of this phase (2012), the terminal will have a processing capacity of 4,500 passengers per hour.[5] Thus the airport's capacity is expected to raise to a total of 6 mil. passengers annually on both domestic and international routes.[6]

Beyond Phase III, a new terminal building (Henri Coandă 2), located at the Eastern end of the current location is envisaged. Henri Coanda 2 will be of a modular design, consisting of 4 separate buildings, each capable of individually handling 5 million passengers annually. Each module will be built as traffic demands will dictate. Thus, by 2023, Terminal 2 alone should be able to handle the 20 million passengers per year indicated by estimates.

The terminal will be connected to the future A3 Bucharest - Braşov motorway, to the railway system and to the Bucharest Metro system as M7 Line.[7]

The airport has one concourse (the so-called finger terminal) with 24 gates (of which 14 equipped with jetways) and passengers transit organized in two separate, Schengen/non-Schengen, flows.[10] 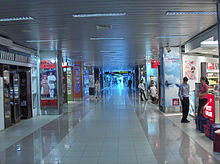 The International Departure area hosts a variety of shops, cafes, lounges, Internet cafes and many more. There is also a chapel at the first level of the International Departures Hall. The facilities inside the airport are easily accessible for the persons with disabilities. Airlines distribute Romanian- and English-language newspapers at the departure gates. 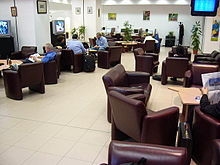 The main handling agent in the airport is Globeground, the second being Menzies. The catering services are provided by Alpha Rocas [6].

A direct train service to the main railway station, Gara de Nord, runs from the Airport train station, about 900 m from the airport. Shuttle buses connect this train station with the departures and arrivals halls and the tickets are valid both for the train and for the transfer bus.

The next phase of the airport's expansion aims to locate the train station in the airport itself.

The airport is 16.5 km (10.3 mi) north of central Bucharest, to which it is connected by route DN1. The A3 motorway will connect the airport and the city, when finished.

Plans for a new subway line connecting Henri Coanda airport to the city center have been made. Construction of the new line is due to start in 2011.