European colonialization of New Jersey started soon after the 1609 exploration of its coast and bays by Sir Henry Hudson. Part of the state was settled by Dutch and Swedish as New Netherland and New Sweden. In 1664 the entire area was surrendered to the British, and given its name. With ratification of the Treaty of Westminster in 1674, they formally gained control of the region until the American Revolution.

A wave of inhabitant entered the region 2,986 years ago and left behind advanced hunting implements such as bows and arrows and evidence of an agricultural society. The region has probably remained continually inhabited from that time. 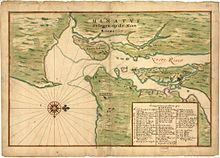 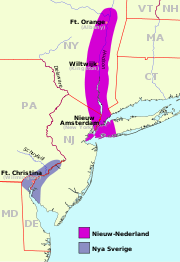 Dutch settlement in the seventeenth century was concentrated along the banks of the North River and the Upper New York Bay, though they maintained facotijen along the Delaware River as well. Although the European principle of land ownership was not recognized by the Lenape, Dutch policy required formal purchase of all land settled upon [1] The settlement grew slowly, impeded by Willem Kieft's mismanagement.[2] In 1658, the last Director-General of New Netherland, Peter Stuyvesant, "re-purchased" the entire peninsula known as Bergen Neck, and in 1661 granted a charter to the village at Bergen, establishing the oldest municipality in the state.[3]

For more details on this topic, see New Sweden.

New Sweden, founded in 1638, rose to its height under governor Johan Björnsson Printz (1643–1653). Led by Printz, the settlement extended as far north as Fort Christina (on both sides of the Delaware River).[4] He helped to improve the military and commercial status of the colony by constructing Fort Nya Elfsborg, which is now near Salem, on the east side of the Delaware River. Swedesboro and Bridgeport were founded as part of the colony.[5] In 1655, the Dutch asserted control over the territory.[6]

Italian navigator John Cabot left England in 1456 to explore North America. The British claimed that New Netherland was part of Cabot's discoveries, prior to Hudson. Insisting that John Cabot had been the first to discover North America, the British granted the land that now encompasses New Jersey to the Duke of York, who ordered Colonel Richard Nicolls to take over the area.[7] In September 1664, a British fleet under the command of Richard Nicolls sailed into what is now Port of New York and New Jersey and seized the colony from the Dutch. The British received little resistance due to West India Company's decision not to garrison the colony. After capturing the colony, Nicolls took the position of deputy-governor of New Amsterdam and the rest of New Netherland, guaranteeing colonists' property rights, laws of inheritance, and the enjoyment of religious freedom. Within six years, the nations were again at war, and in August 1673 the Dutch recaptured New Netherland with a fleet of 21 ships. Nevertheless, in November 1674, the Dutch Treaty of Westminster concluded the war and ceded New Netherland to the English due financial insolvency.[8]

Charles II gave the region between New England and Maryland to his brother, the Duke of York (later King James II), which was renamed New York. Soon thereafter James granted the land between the Hudson River and the Delaware River to two friends who had been loyal to him through the English Civil War: Sir George Carteret and Lord Berkeley of Stratton. That part of New Netherland was named New Jersey after the English Channel Island of Jersey.[9]

The two proprietors of New Jersey attempted to entice more settlers to move to New Jersey by granting sections of lands to settlers and by passing Concession and Agreement, a document granting religious freedom to all inhabitants of New Jersey; under the British Church of England there was no such religious freedom. In return for land, settlers paid annual fees known as quitrents. Land grants made in connection to the importation of slaves were another enticement for settlers.[10]Philip Carteret was appointed by the two proprietors as the first governor of New Jersey. Philip Carteret designated Elizabethtown as the first capital of the colony.[11] However, it became difficult for the two proprietors to collect the quitrents. As a result, on March 18, 1673 Berkeley sold his share of New Jersey to the Quakers.[12][13]

Division into East and West 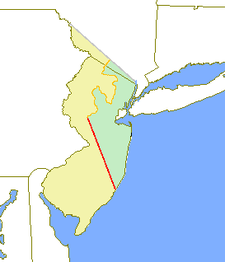 The original provinces of West and East New Jersey are shown in yellow and green respectively. The Keith Line is shown in red, and the Coxe and Barclay line is shown in orange

With this sale, New Jersey was divided into East Jersey and West Jersey, two distinct provinces of the proprietary colony.[14] The political division existed for the 26 years between 1674 and 1702. Determination of an exact location for a border between West Jersey and East Jersey was often a matter of dispute, as was the border with New York.

The border between the two sides reached the Atlantic Ocean to the north of Atlantic City. The border line was created by George Keith, and can still be seen in the county boundaries between Monmouth and Burlington/Mercer Counties; Burlington and Ocean Counties; and Hunterdon and Somerset Counties, reaching upward to a point on the Delaware River which is just north of the Delaware Water Gap. The border was often disputed, so with the 1676 Quintipartite Deed more accurate surveys and maps were made to resolve property disputes. This resulted in the Thornton line, drawn around 1696, and the Lawrence line, drawn around 1743, which was adopted as the final line for legal purposes.

After 1675 much of the territory was quickly divided up leading to the distribution of land into large tracts which later led to real estate speculation and subdivision. In East Jersey they included the Elizabethtown Tract, Newark Tract, Horseneck Tract, Woodbridge, Piscataway, Shrewsbury, New Barbadoes Neck, English Neighborhood, and Maisland. In West Jersey, Salem and Burlington were early settlements.

After the final transfer of power to the English, New Netherlanders and their descendents spread across East Jersey and established many of the towns and cities which exist today.[15] The Dutch Reformed Church played an important role this expansion [16] Following the course of the Hudson River in the north to the Raritan River in the south, settlement and population grew along what George Washington called the "Dutch Belt".[17] The American classis secured a charter in 1766 for Queens College (now Rutgers University), where the appointment in 1784 of John Henry Livingston as professor of theology marked the beginning of the New Brunswick Theological Seminary. 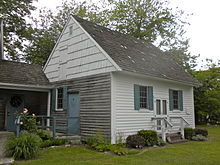 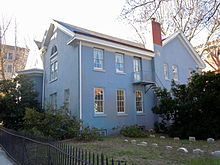 Much of West Jersey was settled by Quakers who established congregations and founded towns througout the region, including eponymous Quakertown in 1744. Among the meeting houses built in the colonial era are:

Main article: List of the oldest buildings in New Jersey

There are numerous extant buildings from the colonial era located throughout the state.

The oldest continuoly school site in the state was established in 1664 at Bergen Square, in today's Jersey City.[42]

Two Colonial Colleges were founded in the Province. In 1746, The College of New Jersey (now Princeton University) was founded in Elizabethtown by a group of Great Awakening "New Lighters" that included Jonathan Dickinson, Aaron Burr, Sr. and Peter Van Brugh Livingston. In 1756, the school moved to Princeton. In 1766, Queens College (now Rutgers University) was founded in New Brunswick by Dutch Reformed ministers with a Royal Charter from George III. The college was named after his wife Queen Charlotte.