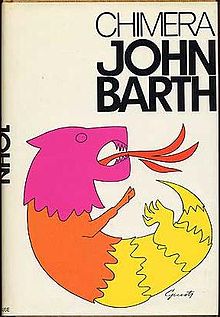 Chimera is a 1972 postmodern novel by John Barth composed of three loosely connected novellas. The novellas are Dunyazadiad, Perseid and Bellerophoniad, the titles of which eponymously refer to the mythical characters Dunyazad, Perseus and Bellerophon, the last of whom slew the Chimera. This work exemplifies postmodernism, with several Q&A sessions and three diagrams (all in Bellerophoniad). Chimera won the National Book Award for Fiction in 1973.

The Dunyazadiad is a retelling of the framing story of Scheherazade, the famed storyteller of the One Thousand and One Nights. The story is told from the point-of-view of Scheherazade's younger sister Dunyazad. Its characterization as metafiction can be understood as a result of the use of several literary devices, most notably the introduction of the author as a character and his interaction with Scheherazade and Dunyazade. The author appears from the future and expresses his admiration for Scheherazade and the 1001 Nights as a work of fiction, of which Barth's Scheherazade has no knowledge. Realizing that he has appeared to Scheherazade on the eve of her first encounter with Shahryar, and seeing her without a solution to her predicament, the author himself suggests the stratagem of using a chain of interrupted stories to forestall her execution, and offers to tell her a new story every day with which to regale the king the following evening. Taking the author for a genie, Scheherazade agrees.

The second novella entitled Perseid follows the middle aged Greek hero Perseus in his struggle to obtain immortality. Told from Perseus' point of view, the first part of the story revolves around the retelling of Perseus' life history while the following part details his rise to, and eventual immortalization as a constellation of stars.

The final novella, Bellerophoniad, chronicles the story of Bellerophon, yet another ancient Greek hero. While somewhat rooted in the myth as told by the Greek and Roman poets, Barth's version of the story is not a direct retelling, but instead a re-imagining. Much like the Perseid, the Bellerophoniad surrounds a middle aged mythic hero who struggles with coming to terms with his past accomplishments and a desire to secure his future glory. It is, for the most part, told from the point of view of Bellerophon, with various interjections by unknown narrators, one of which is presumed to be the author Barth. Of the three novellas, it is by far the longest and—more so than in Dunyazadiad and Perseid—makes numerous references to the other novellas, further connecting common themes and events between the three.