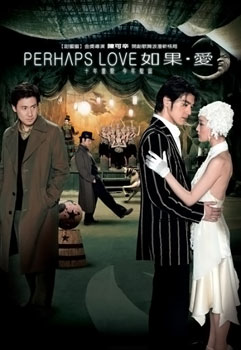 The film reportedly cost 10 million, and it earned US$2.2 million in its opening weekend.

The film's female lead won the in the Best Actress category. The film was also nominated for eleven . It lost the awards for Best Picture, Best Director (Peter Chan), Best Film Editing ( and ), Best Screenplay ( and ), and Best Sound Design (). It won awards for Best Actress (), Best Art Direction ( and ), Best Cinematography( and ), Best Costume & Make Up Design (Chung Man Yee and ), Best Original Film Score ( and ), and Best Original Film Song for "Perhaps Love" (this award was shared by composer Peter Kam, lyricist , and , who performed the song in the film).

Though Christopher Doyle worked on the cinematography for the film along with Oscar-winner Peter Pau (who won for ""), it's unclear whether he actually shared the with Peter Pau or not. Christopher Doyle has, however, won (by himself) the Best Cinematography award from the Hong Kong Film Awards for "2046", "Hero", "Fallen Angels", "", "", and "Soul". He's also been nominated for the Best Cinematography award for the feature films "Her Beautiful Life Lies" and "Happy Together" and the short films "Dumplings" and "Going Home". ("Going Home", from the sequel to "", was incidentally directed by Peter Chan.) He also shared a nomination for the award with for "".

Director Peter Chan had been quoted as saying "I am willing to exchange my 11 nominations for the nomination of Takeshi for Best Actor award. My greatest regret is Takeshi Kaneshiro wasn't nominated". Despite this, Kaneshiro continued to receive rave reviews for a spectacular performance of a vulnerable yet angry and ultimately maturing character.

The film is often compared to "", as it prominently features the device of a , which depicts a real-life love triangle between the actors themselves. It is also a musical, although unlike "Moulin Rouge!" the musical numbers are limited to the inner show.

In an interview with the n newspaper "The Star", director Peter Chan stressed that "Perhaps Love" is a love story, not a musical. It's not even being promoted as a musical. It's not a musical in the conventional sense. My characters don’t break out into song. Initially, it was a challenge to balance the over-the-top element in musicals and the subtleties of a movie. In the end, the method I used to overcome that was to make a movie-within-a-movie." The interview appeared in the , edition of "The Star", as Peter Chan was in to promote his film.

The film has also drawn comparisons to , the Indian film industry famous for its musical films. The "" described "Perhaps Love" as "Bollywood meets ." Bollywood director and choreographer choreographed the film, which featured nine Indian dancers who appeared in several musical numbers. The double-disc editions of the film also contained a feature on the film's Bollywood dancers on the second disc.

The soundtrack was released in two versions: a single-disc version in a jewel case and a limited-edition, double-disc, version. The double-disc version was marketed as a "Special Deluxe Edition" and included a bright red slipcase (embossed to look like leather) with gold lettering. The slipcase was seven and three-fourths inches tall, one and three-fourths inches deep, and five and three-fourts inches wide. It included a twenty-eight page book, printed on thick paper, which included a synopsis of the film and brief biographies of its stars in both Chinese and English. The book also included eighteen color photographs. The soundtrack was presented in a folding case with the music on a and a "making of" movie on a disc. The folding case also included five postcards (including one for each of the film's four major stars) and a poster. The "Special Deluxe Edition" retailed for around US$25.

The "Special Edition" included a gold-colored cardboard slipcase and a with two DVD discs. The first disc, in format, contained the film with optional subtitles in English, traditional Chinese, or simplified Chinese. The second disc, in format, contained sixty minutes of bonus material, including a "making of" feature, a , additional information on the cast, an extended credit list, and a feature on the film's Bollywood dancers, as well as other clips. This set retailed for US$18.

The "Golden Limited Edition" was limited to only 4,000 copies and was essentially the same as the "Special Edition", except that it also included a hardcover book of nearly two dozen pages with a gold-colored cover. It retailed for around US$40.

The film was also released on in a three-disc set that retailed for around US$9.

Pirated DVDs of the film also appeared within days of the film being released in theaters, and were available for purchase for US$2-US$3.