Sodium silicate is the common name for a compound sodium metasilicate, Na2SiO3, also known as water glass or liquid glass. It is available in aqueous solution and in solid form and is used in cements, passive fire protection, refractories, textile and lumber processing, and automobiles. Sodium carbonate and silicon dioxide react when molten to form sodium silicate and carbon dioxide:[1]

Anhydrous sodium silicate contains a chain polymeric anion composed of corner shared {SiO4} tetrahedral, and not a discrete SiO32− ion.[1] In addition to the anhydrous form, there are hydrates with the formula Na2SiO3·nH2O (where n = 5, 6, 8, 9) which contain the discrete, approximately tetrahedral anion SiO2(OH)22− with water of hydration. For example, the commercially available sodium silicate pentahydrate Na2SiO3·5H2O is formulated as Na2SiO2(OH)2·4H2O and the nonahydrate Na2SiO3·9H2O is formulated as Na2SiO2(OH)2·8H2O.[2]

In industry, the different grades of sodium silicate are characterized by their SiO2:Na2O ratio, which can vary between 2:1 and 3.75:1.[3] Grades with this ratio below 2.85:1 are termed 'alkaline'. Those with a higher SiO2:Na2O ratio are described as 'neutral'.

Water Glass was defined in Von Wagner's Manual of Chemical Technology (1892 translation) as any of the soluble alkaline silicates, first observed by Van Helmont in 1640 as a fluid substance made by melting sand with excess alkali. Glauber made what he termed "fluid silica" in 1648 from potash and silica. Von Fuchs, in 1825, obtained what is now known as water glass by treating silicic acid with an alkali, the result being soluble in water, "but not affected by atmospheric changes".[4] Von Wagner distinguished soda, potash, double(soda and potash), and fixin as types of water glass. The fixing type was "a mixture of silica well saturated with potash water glass and a sodium silicate" used to stabilize inorganic water color pigments on cement work for outdoor signs and murals.

Sodium silicate is a white powder that is readily soluble in water, producing an alkaline solution. It is one of a number of related compounds which include sodium orthosilicate, Na4SiO4, sodium pyrosilicate, Na6Si2O7, and others. All are glassy, colourless and dissolve in water.

Sodium silicate is stable in neutral and alkaline solutions. In acidic solutions, the silicate ion reacts with hydrogen ions to form silicic acid, which when heated and roasted forms silica gel, a hard, glassy substance.

Each and every substance has its own unique CAS registry number and EINECS number. The CAS No. and EINECS No. of sodium silicate and other related substances are:[5]

Sodium silicate is used, along with magnesium silicate, in muffler repair and fitting paste. When dissolved in water, both sodium silicate, and magnesium silicate form a thick paste that is easy to apply. When the exhaust system of an internal combustion engine heats up to its operating temperature, the heat drives out all of the excess water from the paste. The silicate compounds that are left over have glass-like properties, making a temporary, brittle repair.

Sodium silicate can be used to seal leaks at the head gasket. A common use is when an aluminum alloy cylinder head engine is left sitting for extended periods or the coolant is not changed at proper intervals, electrolysis can "eat out" sections of the head causing the gasket to fail.

Rather than remove the cylinder head, "liquid glass" is poured into the radiator and allowed to circulate. The waterglass is injected via the radiator water into the hotspot at the engine. This technique works because at 100-105 °C the sodium silicate loses water molecules to form a very powerful sealant that will not re-melt below 810 °C.

A sodium silicate repair of a leaking head gasket can hold for up to two years and even longer in some cases. The effect will be almost instant, and steam from the radiator water will stop coming out the exhaust within minutes of application. This repair only works with water-to-cylinder or water-to-air applications and where the sodium silicate reaches the "conversion" temperature of 100-105 °C.

Sodium silicate flocculant properties are also used to clarify wine and beer by precipitating colloidal particles. But as a clearing agent sodium silicate (water glass) is sometimes confused with isinglass (a form of gelatin prepared from collagen extracted from the dried swim bladders of sturgeon and other fishes). Eggs preserved in a bucket of waterglass gel, and their shells, are sometimes also used (baked and crushed) to clear wine.[6]

Sodium silicate solution is used to inexpensively, quickly, and permanently disable automobile engines. Running an engine with about 2 liters of a sodium silicate solution instead of motor oil causes the solution to precipitate, catastrophically damaging the engine's bearings and pistons within a few minutes.[7] In the United States, this procedure was required by the Car Allowance Rebate System (CARS) program.[7][8]

One common example of its use as a paper cement was for producing paper cartridges for black powder revolvers produced by Colt's Manufacturing Company during the period from 1851 until 1873, especially during the American Civil War. Sodium silicate was used to seal combustible nitrated paper together to form a conical paper cartridge to hold the black powder, as well as to cement the lead ball or conical bullet into the open end of the paper cartridge. Such sodium silicate cemented paper cartridges were inserted into the cylinders of revolvers, thereby speeding the reloading of cap and ball black powder revolvers. This use largely ended with the introduction of Colt revolvers employing brass-cased cartridges starting in 1873.[9][10]

When used as a paper cement, the tendency is for the sodium silicate joint eventually to crack within a few years, at which point it no longer holds the paper surfaces cemented together.

Sodium silicate gel is also used as a substrate for algal growth in aquaculture hatcheries.

Sodium silicate was also used as an egg preservation agent in the early 20th century with large success. When fresh eggs are immersed in it, bacteria which cause the eggs to spoil are kept out and water is kept in. Eggs can be kept fresh using this method for up to nine months. When boiling eggs preserved this way, it is well advised to pin-prick the egg to allow steam to escape because the shell is no longer porous.[11]

Sodium silicate is frequently used in drilling fluids to stabilize borehole wells and to avoid the collapse of bore walls. It is particularly useful when drill holes pass through argillaceous formations containing swelling clay minerals such as smectite or montmorillonite.

Concrete treated with a sodium silicate solution helps to significantly reduce porosity in most masonry products such as concrete, stucco, plasters. A chemical reaction occurs with the excess Ca(OH)2 (portlandite) present in the concrete that permanently binds the silicates with the surface making them far more wearable and water repellent. It is generally advised to apply this treatment only after the initial cure has taken place (7 days or so depending on conditions). These coatings are known as silicate mineral paint. 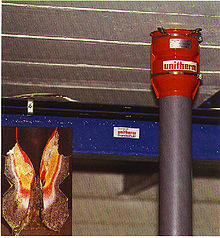 Sodium silicates are inherently intumescent. They come in prill (solid beads) form, as well as the liquid, water glass. The solid sheet form (Palusol) must be waterproofed to ensure long-term passive fire protection.

Standard, solid, bead form sodium silicates have been used as aggregate within silicone rubber to manufacture plastic pipe firestop devices. The silicone rubber was insufficient waterproofing to preserve the intumescing function and the products had to be recalled, which is problematic for firestops that are concealed behind drywall in buildings.

Pastes for caulking purposes are similarly unstable. This too has resulted in recalls and even litigation. Only 3M's "Expantrol" version, which has an external heat treatment that helps to seal the outer surface, as part of its process standard, has achieved sufficient longevity to qualify for DIBt approvals in the US for use in firestopping

Not unlike other intumescents, sodium silicate, both in bead form and in liquid form are inherently endothermic, due to liquid water in the water glass and hydrates in the prill form. The absence in the US of mandatory aging tests, whereby PFP systems are made to undergo system performance tests after the aging and humidity exposures, are at the root of the continued availability, in North America, of PFP products that can become inoperable within weeks of installation. Indiscriminate use of sodium silicates without proper waterproofing measures are contributors to the problems and risk. When sodium silicates are adequately protected, they function extremely well and reliably for long periods. Evidence of this can be seen in the many DIBt approvals for plastic pipe firestop devices using Palusol, which use waterproofed sodium silicate sheets.

A mixture of sodium silicate and sawdust has been used in between the double skin of certain safes. This not only makes them more fire resistant, but also makes cutting them open with an oxyacetylene torch extremely difficult due to the smoke emitted.

Water glass is a useful binder of solids, such as vermiculite and perlite. When blended with the aforementioned lightweight aggregates, water glass can be used to make hard, high-temperature insulation boards used for refractories, passive fire protection and high temperature insulations, such as moulded pipe insulation applications. When mixed with finely divided mineral powders, such as vermiculite dust (which is common scrap from the exfoliation process), one can produce high temperature adhesives. The intumescence disappears in the presence of finely divided mineral dust, whereby the waterglass becomes a mere matrix. Waterglass is inexpensive and abundantly available, which makes its use popular in many refractory applications.

Water glass is used as coagulant/flocculant agent in waste water treatment plants. Waterglass binds to colloidal molecules, creating larger aggregates that sink to the bottom of the water column. The microscopic negatively charged particles suspended in water interact with sodium silicate. Their electrical double layer collapses due to the increase of ionic strength caused by the addition of sodium silicate (doubly negatively charged anion accompanied by two sodium cations) and they subsequently aggregate. This process is called coagulation/flocculation.[citation needed]

Water glass was used in the Magic rocks toys invented in 1940. When waterglass was combined with a selection of different metals in solution, the waterglass would cause the metals to precipitate. Each metal would precipitate separately causing a different color stalagmite.

An early mention of crystals of metallic salts forming a "chemical garden" in sodium silicate is found in the 1946 Modern Mechanix magazine.[12] This results in very colorful gardens—much more than shown in the illustrations.

In Europe the ingredients for such chemical gardens were available already around the early 1930s.

Sodium silicate solution is used as a fixative for hand dyeing with reactive dyes that require a high pH in order to react with the textile fiber. After the dye is applied to a cellulose-based fabric, such as cotton or rayon, or onto silk, it is allowed to dry, after which the sodium silicate is painted on to the dyed fabric, covered with plastic to retain moisture, and left to react for an hour at room temperature.[13]

Sodium silicate with additives was injected into the ground in order to harden it and thereby to prevent further leakage of highly radioactive water from the Fukushima Daiichi nuclear power plant in Japan in April, 2011.[14] The residual heat carried by the water used for cooling the damaged reactors accelerated the setting of the injected mixture.