Limit of a function

Limit of a function

Although the function (sin x)/x is not defined at zero, as x becomes closer and closer to zero, (sin x)/x becomes arbitrarily close to 1. It is said that "the limit of (sin x)/x as x approaches zero equals 1."

In mathematics, the limit of a function is a fundamental concept in calculus and analysis concerning the behavior of that function near a particular input.

Formal definitions, first devised in the early 19th century, are given below. Informally, a function f assigns an output f(x) to every input x. The function has a limit L at an input p if f(x) is "close" to L whenever x is "close" to p. In other words, f(x) becomes closer and closer to L as x moves closer and closer to p. More specifically, when f is applied to each input sufficiently close to p, the result is an output value that is arbitrarily close to L. If the inputs "close" to p are taken to values that are very different, the limit is said to not exist.

The notion of a limit has many applications in modern calculus. In particular, the many definitions of continuity employ the limit: roughly, a function is continuous if all of its limits agree with the values of the function. It also appears in the definition of the derivative: in the calculus of one variable, this is the limiting value of the slope of secant lines to the graph of a function.

Although implicit in the development of calculus of the 17th and 18th centuries, the modern notion of the limit of a function goes back to Bolzano who, in 1817, introduced the basics of the epsilon-delta technique to define continuous functions. However, his work was not known during his lifetime (Felscher 2000). Cauchy discussed limits in his Cours d'analyse (1821) and gave essentially the modern definition, but this is not often recognized because he only gave a verbal definition (Grabiner 1983). Weierstrass first introduced the epsilon-delta definition of limit in the form it is usually written today. He also introduced the notations lim and limx→x0 (Burton 1997).

The modern notation of placing the arrow below the limit symbol is due to Hardy in his book A Course of Pure Mathematics in 1908 (Miller 2004).

Imagine a person walking over a landscape represented by the graph of y = f(x). His horizontal position is measured by the value of x, much like the position given by a map of the land or by a global positioning system. His altitude is given by the coordinate y. He is walking towards the horizontal position given by x = p. As he gets closer and closer to it, he notices that his altitude approaches L. Say there's a wall there so he can't stand on that point exactly, but can still get arbitrarily close to it. If asked about the altitude of x = p, he would then answer L.

The accuracy goal is then changed: can he get within one vertical meter? Yes. If he is anywhere within seven horizontal meters of p, then his altitude always remains within one meter from the target L. In summary, to say that the traveler's altitude approaches L as his horizontal position approaches p means that for every target accuracy goal, however small it may be, there is some neighborhood of p whose altitude fulfills that accuracy goal.

The initial informal statement can now be explicated:

This explicit statement is quite close to the formal definition of the limit of a function with values in a topological space.

means that ƒ(x) can be made as close as desired to L by making x close enough, but not equal, to p.

The following definitions (known as (ε, δ)-definitions) are the generally accepted ones for the limit of a function in various contexts.

Functions on the real line

Suppose f : R → R is defined on the real line and p,L ∈ R. It is said the limit of f as x approaches p is L and written

Note that the value of the limit does not depend on the value of f(p), nor even that p be in the domain of f.

The letters ε and δ can be understood as "error" and "distance", and in fact Cauchy used ε as an abbreviation for "error" in some of his work (Grabiner 1983). In these terms, the error (ε) in the measurement of the value at the limit can be made as small as desired by reducing the distance (δ) to the limit point. As discussed below this definition also works for functions in a more general context. The idea that δ and ε represent distances helps suggest these generalizations. 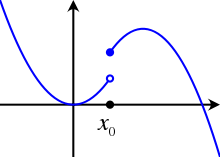 Alternatively x may approach p from above (right) or below (left), in which case the limits may be written as

If the limit does not exist there is a non-zero oscillation.

Examle of elementary function without a limit

The function without limit, an essential discontinuity

Suppose M and N are subsets of metric spaces A and B, respectively, and f : M → N is defined between M and N, with x ∈ M, p a limit point of M and L ∈ N. It is said that the limit of f as x approaches p is L and write

Again, note that p need not be in the domain of f, nor does L need to be in the range of f, and even if f(p) is defined it need not be equal to L.

An alternative definition using the concept of neighbourhood is as follows:

This last part of the definition can also be phrased "there exists an open punctured neighbourhood U of p such that f(U∩Ω) ⊆ V ".

Note that the domain of f does not need to contain p. If it does, then the value of f at p is irrelevant to the definition of the limit. In particular, if the domain of f is X - {p} (or all of X), then the limit of f as x → p exists and is equal to L if, for all subsets Ω of X with limit point p, the limit of the restriction of f to Ω exists and is equal to L. Sometimes this criterion is used to establish the non-existence of the two-sided limit of a function on R by showing that the one-sided limits either fail to exist or do not agree. Such a view is fundamental in the field of general topology, where limits and continuity at a point are defined in terms of special families of subsets, called filters, or generalized sequences known as nets.

A function is continuous in a limit point p of and in its domain if and only f(p) is the (or, in the general case, a) limit of f(x) as x tends to p. 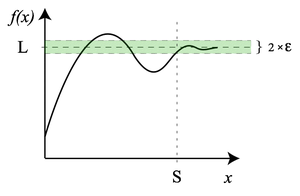 The limit of this function at infinity exists.

If the extended real line R is considered, i.e., R ∪ {-∞, ∞}, then it is possible to define limits of a function at infinity.

If f(x) is a real function, then the limit of f as x approaches infinity is L, denoted

Similarly, the limit of f as x approaches negative infinity is L, denoted

Limits can also have infinite values, for example the limit of f as x approaches a is infinity, denoted

These ideas can be combined in a natural way to produce definitions for different combinations, such as

Limits involving infinity are connected with the concept of asymptotes. 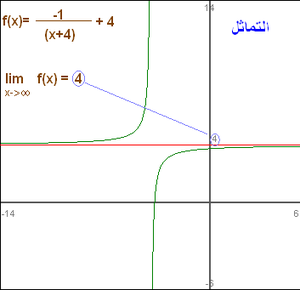 There are three basic rules for evaluating limits at infinity for a rational function f(x) = p(x)/q(x): (where p and q are polynomials):

The complex plane with metric d(x,y): = | x − y | is also a metric space. There are two different types of limits when the complex-valued functions are considered.

Limit of a function at a point

If f is a complex-valued function, then

It is just a particular case of functions over metric spaces with both M and N in the complex plane.

Limit of a function of more than one variable

By noting that |x-p| represents a distance, the definition of a limit can be extended to functions of more than one variable. In the case of a function f : R2 → R,

where ||(x,y)-(p,q)|| represents the Euclidean distance. This can be extended to any number of variables.

Let f : X → Y be a mapping from a topological space X into a Hausdorff space Y, p∈X and L∈Y.

The notion of the limit of a function is very closely related to the concept of continuity. A function ƒ is said to be continuous at c if it is both defined at c and its value at c equals the limit of f as x approaches c:

If the condition 0 < |x − c| is left out of the definition of limit, then the resulting definition would be equivalent to requiring f to be continuous at c.

If f is a real-valued (or complex-valued) function, then taking the limit is compatible with the algebraic operations, provided the limits on the right sides of the equations below exist (the last identity only holds if the denominator is non-zero). This fact is often called the algebraic limit theorem.

In each case above, when the limits on the right do not exist, or, in the last case, when the limits in both the numerator and the denominator are zero, nonetheless the limit on the left, called an indeterminate form, may still exist—this depends on the functions f and g. These rules are also valid for one-sided limits, for the case p = ±∞, and also for infinite limits using the rules

Note that there is no general rule for the case q / 0; it all depends on the way 0 is approached. Indeterminate forms—for instance, 0/0, 0×∞, ∞−∞, and ∞/∞—are also not covered by these rules, but the corresponding limits can often be determined with L'Hôpital's rule or the Squeeze theorem.

In general, the statement

Dividing everything by sin(x) yields

This rule uses derivatives and has a conditional usage. (It can only be directly used on limits that "equal" 0/0 or ±∞/±∞. Other indeterminate forms require some algebraic manipulation usually involving setting the limit equal to y, taking the natural logarithm of both sides, and then applying l'Hôpital's rule.)