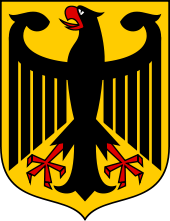 A significant reform to the nationality law was passed by the Bundestag (the German parliament) in 1999, and came into force on 1 January 2000. The new law makes it somewhat easier for foreigners resident in Germany on a long-term basis, and especially their German-born children, to acquire German citizenship.[1]

The previous German nationality law dated from 1913. The amendments to the law under the Nazi regime were repealed by the Federal Republic of Germany (see the article on the Reich Citizenship Law).

Prussian law was the basis of the legal system of the German Empire. Prussia's nationality law can be traced back to the "Law Respecting the Acquisition and Loss of the Quality as a Prussian subject, and his Admission to Foreign Citizenship" of 31 December 1842, which introduced Jus sanguinis to the country. Until 1913, however, each German state had its own nationality laws, those of the southern ones (notably Bavaria) being quite liberal. In 1913, the Nationality Law of the German Empire and States (RuStAG) of 22 July 1913 standardized the law in all of the German Empire. It had been operational until the 1999 reforms.[2]

Children born on or after 1 January 2000 to non-German parents acquire German citizenship at birth if at least one parent:

Such children will be required to apply successfully to retain German citizenship by the age of 23. Assuming the laws (very unlikely) are not changed prior to 2023, they will normally be required to prove they do not hold any other foreign citizenship. The only exceptions are EU citizens and citizens of countries where it is impossible to lose your citizenship, like Morocco or Iran, for example.

Parents who are citizens of European Economic Area states or Switzerland are eligible to receive permanent resident permits after five years.

Descent from a German parent

Persons who are Germans on the basis of descent from a German parent do not have to apply to retain German citizenship by age 23. If they acquire another citizenship at birth, they can usually continue to hold this.

A child adopted by a German citizen becomes German national automatically if aged less than 18 on the date the application for adoption was made. So dual citizenship is granted.

Naturalisation as a German citizen

An individual who fulfils all of the following criteria has an entitlement to naturalise as a German citizen:[4]

An individual who does not have legal capacity is entitled to naturalise as a German citizen merely through ordinary residence in Germany for at least 8 years - he/she does not have to fulfil the other criteria (e.g. adequate command of the German language and ability to be self-supporting without recourse to benefits).

Exceptions to the normal residence requirements include:

An individual who is ordinarily resident outside may be naturalised as a German citizen if he/she can demonstrate sufficient ties with Germany which justify his/her naturalisation.[5]

Under transitional arrangements in the 1999 reforms (effective 1 January 2000), children who were born in Germany in 1990 or later, and would have been German had the law change been in force at the time, were entitled to be naturalised as German citizens.

Certain ethnic Germans from Eastern Europe and the former Soviet Union may claim German citizenship under the Right of Return law.

Other cases where German citizenship can be lost include: