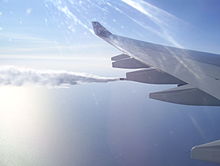 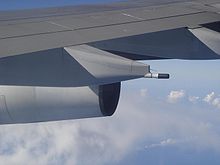 Fuel dumping (or a fuel jettison) is a procedure used by aircraft in certain emergency situations before a return to the airport shortly after takeoff, or before landing short of its intended destination (emergency landing) to lighten the aircraft's weight.

It is the abnormal, non-routine flight where landing weight can be an issue. If a flight takes off at the maximum structural takeoff weight and then faces a situation where it must return to the departure airport (due to certain mechanical problems, or a passenger medical issue), there will not be time to consume the fuel meant for getting to the original destination, and the aircraft may be over the maximum structural landing weight to land back at the departure point.

During the 1960s, Boeing introduced the 737, and Douglas the DC-9, the original models of each being for shorter routes; the 105% figure was not an issue, thus they had no fuel dump systems installed. During the 1960s and 1970s, both Boeing and Douglas "grew" their respective aircraft as far as operational capabilities were concerned via Pratt & Whitney's development of increasingly powerful variants of the JT8D engines that powered both aircraft series. Both aircraft were now capable of longer duration flights, with increased weight limits, and complying with the existing 105% rule became problematic due to the costs associated with adding a fuel dump system to aircraft in production. Considering the more powerful engines that had been developed, the FAA changed the rules to delete the 105% requirement, and FAR 25.1001 was enacted stating a jettison system was not required if the climb requirements of FAR 25.119 (Landing Climb) and FAR 25.121 (Approach Climb) could be met, assuming a 15-minute flight. In other words, for a go-around with full landing flaps and all engines operating, and at approach flap setting and one engine inoperative, respectively.

Since most twinjet airliners can meet these requirements, most aircraft of this type such as the Boeing 737 (all models), the DC-9/MD80 and Boeing 717, the A320 family and various regional jet ("RJ") aircraft do not have fuel dump systems installed. In the event of an emergency requiring a return to the departure airport, the aircraft circles nearby in order to consume fuel to get down to within the maximum structural landing weight limit, or if the situation demands it, simply lands overweight without delay. Modern aircraft are designed with possible overweight landings in mind, but this is not done except in cases of emergency, and various maintenance inspections are required afterwards.

Many movies and TV news stories mistakenly assume that all aircraft can dump fuel, when in fact most cannot. In certain atmospheric conditions where the moisture content of the air is high, 737s (and other aircraft) flying at low altitudes sometimes leave a moisture trail that can come off the top of the wing, wingtips, or trailing edge flaps. Moisture trails coming off the trailing edge flaps can appear especially odd, since the moisture is being "spun" by aerodynamic forces. It is possible that some people observe these moisture trails and wrongly think fuel is being dumped.

Longer-range twin jets such as the Boeing 767 and the Airbus A300, A310, and A330 may or may not have fuel dump systems, depending upon how the aircraft was ordered, since on some aircraft they are a customer option. Three- and four-engine jets like the Lockheed L-1011, McDonnell Douglas DC-10 / MD-11, Boeing 747 and Airbus A340 usually have difficulty meeting the requirements of FAR 25.119 near maximum structural takeoff weight, so most of those have jettison systems. A Boeing 757 has no fuel dump capability as its maximum landing weight is similar to the maximum take-off weight.

Fuel dumping operations are coordinated with air traffic control, and precautions are taken to keep other aircraft clear of such areas. Fuel dumping is usually accomplished at a high enough altitude where the fuel will dissipate before reaching the ground. Fuel leaves the aircraft through a specific point on each wing, usually closer to the wingtips and further away from engines, and initially appears as more liquid than vapor.

The largest scale fuel dumping occurred on September 11, 2001, when many international flights were refused American airspace entry due to numerous hijacking incidents. Many of these international flights were fueled for travel well into the American interior. Many such flights were diverted into Canadian airspace, Newfoundland specifically, or instructed to return to their point of origin. For those mid-flight aircraft unable to land safely due to excessive fuel weight, dumping became necessary.

A dump-and-burn is a fuel dump in which the fuel is ignited, intentionally, using the plane's afterburner. A spectacular flame combined with high speed makes this a popular display for air shows or as a finale to fireworks. Dump-and-burns are also referred to as "torching" or "zippos".

General Dynamics F-111 aircraft have been used for this purpose in Australia during the closing ceremony of the 2000 Summer Olympics[1] and (until 2010) regularly at Brisbane's Riverfestival.