Council of the North

Council of the North 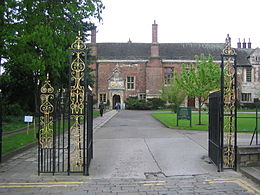 King's Manor, York — seat of the Council of the North after it was reinstated until 1641.

The Council of the North was an administrative body originally set up in 1484 by king Richard III of England, the third and last Yorkist monarch to hold the Crown of England;[1][2] its intention was to improve government control and economic prosperity, to benefit the entire area of Northern England. Throughout its history, the council was always located within Yorkshire, first at Sheriff Hutton and then Sandal Castle.

After the Wars of the Roses and the emergence of the Tudor dynasty, there were some troubles in the area in relation to the English Reformation, the Church of England's split from Rome and the dissolution of the Monasteries under Henry VIII. In the North, most people remained staunch supporters of the Catholic faith and were deeply unhappy with the changes; the people rose up in York creating a 30,000 strong rebel Catholic army carrying crosses and banners depicting the Holy Wounds; this became known as the Pilgrimage of Grace.[3]

Henry VIII's army was not strong enough to fight them, and so Thomas Howard was sent to negotiate peace with rebel leader Robert Aske. It was promised that the rebels would be pardoned and a parliament would be held in York to discuss their demands; the rebels convinced that the monasteries would be re-opened returned to their homes. However as soon as they returned to their homes, Henry had the rebel leaders arrested and executed 200 people involved, including Aske, Lady Bulmer and the Abbots of the four largest monasteries in the North.[3]

In 1530, the Council of the North was re-instated in York as a means to govern the area at arms length. It had its own set of presidents who were generally earls, Church of England bishops and lords; some of whom were actually born in the North. By 1641 the Long Parliament had the Council abolished due to reasons relating to the Reformation, the Council was the chief support for Catholic Recusants and Anglicans.

The reason for doing so was the deteriorated state of Northern society since the Harrying of the North under the Normans.[citation needed] Richard was the first post-Norman King of England to legislate and conduct government in the English language, possibly because his experience among his subjects whilst at Middleham Castle had created a mutual respect between them. Die-hard Yorkists did not forget this when Perkin Warbeck and Lambert Simnel appeared. This local loyalty did not save Richard from desertion, when the Earl of Richmond rose against him. (Coincidentally, Richmond Castle had seniority over Middleham Castle!)

Henry VIII reorganised the Council. He placed it under his son; Henry Fitzroy, 1st Duke of Richmond and Somerset with its seat at Sheriff Hutton. Following the suppression of the Pilgrimage of Grace, from 1539, it met at the former house of the Abbot of St. Mary's Abbey, York (founded by the Lord of Richmond) in the centre of that city; after the dissolution of the abbey, the building had been retained by the king who formally allocated it to the Council. The building is nowadays called the King's Manor.

The Council was abolished by the Long Parliament in 1641, because it was the chief support for Catholic Recusants and Anglicans. After the English Restoration, the Secretary of State for the Northern Department was formed and influenced industry.

List of Presidents of the Council of the North