Silent Hill 3 is a survival horror video game published by Konami for the PlayStation 2 and developed by Team Silent, a production group within Konami Computer Entertainment Tokyo. It is the third installment in the Silent Hill series and a direct sequel to the first Silent Hill game.[1] It was released in May 2003, with a port to Microsoft Windows released in October of the same year. A remastered high-definition version of it is due for release for the PlayStation 3[2] and the Xbox 360.[3]

Set seventeen years after the events of Silent Hill[4] in which Harry Mason defeats the god of the town cult and is given a baby girl to care for, Silent Hill 3 focuses on Heather, a teenage girl who finds herself being drawn into Silent Hill's alternate reality. She discovers that the cult plans to use her to birth their god, and becomes caught in a conflict within the cult.

Silent Hill 3 was mostly well-received by critics, especially in its presentation, including the environments, graphics and audio, as well as the overall horror elements and themes that are continued from past installments. 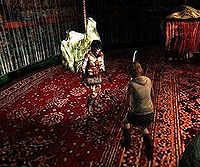 Heather in an "otherworld" amusement park.

Gameplay in Silent Hill 3 resembles closely that of its two predecessors,[5] the three main gameplay elements being combat, exploration, and puzzle-solving.[6] Combat, as exploration, takes place in third-person view, with the player able to equip weapons found throughout the game. Heather may also block and perform side-step maneuvers to avoid enemies.[5] As a series staple, the flashlight and radio return, the latter of which crackles when monsters are in proximity.[7]

Silent Hill 3 is set in the fictional universe of the Silent Hill series. Seventeen years before the start of Silent Hill 3, Harry Mason defeated a god brought forth by the resident cult of Silent Hill and at the ending, was given a baby girl to care for.[10][11]

The protagonist and player character of Silent Hill 3 is Heather, the teenaged adopted daughter of Harry Mason.[10] Claudia Wolf, the cult's priestess who plans to bring about a paradise on Earth, serves as the game's antagonist.[12] As Heather attempts to unravel the reasons why the cult of Silent Hill is pursuing her, she encounters a private investigator named Douglas Cartland;[13] Vincent, a member of the cult who detests Claudia;[14] and Leonard Wolf, Claudia's abusive father.[15]

At the beginning of the game, Heather awakens at a shopping mall. Before she can leave the mall, Douglas Cartland confronts her, claiming to have information about her birth.[13] Heather evades him and discovers that the mall is mostly abandoned except for monsters. She encounters Claudia, who hints about Heather's fate.[12] Heather finds herself in the Otherworld version of the mall—monster-filled and decaying—[16]and is eventually transferred back to the original shopping mall[17] where she encounters Douglas, who confesses that Claudia had hired him to find her.[18] Heather leaves the mall and resolves to take the subway home.[19] Having arrived at her residence, Heather discovers that her father has been killed by a monster under Claudia's orders,[20] who tells her that she will be waiting for her in Silent Hill[21] and leaves.

Heather resolves to go to Silent Hill, intent on killing Claudia. She meets with Douglas in her apartment and accepts his offer to drive her there.[22] On the journey there, Douglas explains that Vincent left him a message, telling them to look for a man named Leonard,[23] whilst Heather reads a memo left by her father before his death, which reveals that she is the baby girl that was left to her adoptive father, Harry Mason, at the conclusion of the first game,[10] after he defeated the god birthed by Alessa Gillespie.[24] Claudia seeks Heather to birth the cult's god, since Heather is Alessa's reincarnation.[11]

Upon arriving in Silent Hill, which is abandoned and fog-shrouded, Heather checks Brookhaven Hospital for Leonard.[25] After discovering that Leonard is Claudia's father,[15] Heather meets a transfigured Leonard, who attacks her after discovering that she is not a cult member;[26] Heather defeats him. She eventually meets Vincent, who directs her to a church via a local amusement park, purportedly at Douglas' request.[27] Upon arriving at the amusement park, Heather is transferred to the Otherworld, where she finds Douglas wounded.[28] She reaches the church and confronts Claudia, who kills Vincent. After swallowing a substance within a pendant that her father had given her,[29] Heather vomits out the deity in fetus form. Claudia swallows the fetus and dies after birthing the deity; Heather then fights and defeats the god.[30]

Three endings appear in the game. The "Normal" ending, which is the only ending available on the first play-through of the game, sees Heather and Douglas survive.[31] The "Possessed" ending sees Douglas having been killed by Heather. The "Revenge" ending, which is a joke ending accessible by performing certain in-game actions, sees Heather talking with Harry and UFOs blow up Silent Hill.[32]

Silent Hill 3 was created by Team Silent, a production group within Konami Computer Entertainment Tokyo.[33][34][35] Development on the PlayStation 2 version began after the release of Silent Hill 2, and was carried out almost simultaneously with development of another Silent Hill title that was intended to explore a different direction for the franchise and not be part of the main, numbered series;[36] known as Room 302, this game would eventually become integrated into the main series as Silent Hill 4: The Room.[37] The development team for this iteration was smaller than that working on Silent Hill 2, with around 40 people working on the game, made up of the core team from the second title and some newcomers.[38] A smaller group of Konami Computer Entertainment Tokyo staff later developed a port for Microsoft Windows.[39]

Like all Silent Hill games, one of Silent Hill 3's influences is the film Jacob's Ladder:[38] one of the subway platforms is named Bergen Street Station, the station Jacob was inquiring about at the beginning of the film.[6] The developers also cited horror writer Stephen King as another of their influences.[38] 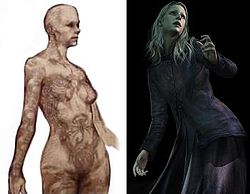 Much like the previous installments, Silent Hill 3 also incorporates references drawn from real life actors and actresses. As the only female protagonist of the series, the creators originally named Heather "Helen", but it was dubbed too old-fashioned and was changed.[4] It was later decided that the character would be named after voice actress Heather Morris who lent her talents to the video game's protagonist.[4] Heather was modeled after French actresses/singers Charlotte Gainsbourg and Vanessa Paradis in several rough sketches.[4]

Douglas Cartland's name came from American actor Douglas Fairbanks.[4] The developers stated that his name "just seemed to suit him" and that there was no true connection to his namesake. During the sketching process, his character was modeled after actors Giancarlo Giannini and Ian Holm.[4] It was noted that even during the concept designs that Cartland was designed as a middle-aged detective.

Claudia Wolf's character was considered the most difficult to design.[4] Early sketches revealed that the creators wanted to dress her like a holy woman in various robes, and at one point she had a shaved head covered entirely with tattoos.[4] Eventually, the creators decided to make her appear like an average woman, modelling her on Julianne Moore, and then removing her eyebrows, so that the "normal" appearance was slightly skewed.[4] She was first named "Christie", but it was deemed too "cute" and the character was eventually named after actress Claudia Cardinale.[4]

Vincent's name originated from actor Vincent Gallo in connection with his unshaven look.[4] Early designs were based on actor Ethan Hawke and focused on capturing a look of "derangement and moodiness."[4]

The original soundtrack for Silent Hill 3, composed by Akira Yamaoka, was released in Japan on July 16, 2003 and in North America on August 6, 2004.[40] The song "You're Not Here", used in the game's introduction sequence, was included in the PS2 port of Dance Dance Revolution Extreme.[41] It is also included in the Silent Hill Experience UMD media pack[42] and is featured during the closing credits of the Silent Hill movie released in 2006.[43] The game's soundtrack is notable as the first using vocals prominently. Most of the vocalized tracks are performed by Mary Elizabeth McGlynn (credited as Melissa Williamson). The end credits song "Hometown" is voiced by Joe Romersa.[44]

Positive reactions were given to the general horror and atmosphere of the game,[5][8] including "truly horrifying sections"[54] whilst it "packs some genuine scares"[52] and "the feeling of eeriness and doom is almost overwhelming".[9] The story told as part of the atmosphere was also received positively,[54] making for a "satisfying, coherent sequel",[55] although its status as such meant that "it may be a little tough to follow for people who haven't played the first game", despite "a laudable effort to help people catch up".[52] In addition, the graphics, audio and general high production values were all credited with adding positively to the atmosphere.

Negative criticism largely stemmed from the lack of any innovations in gameplay; the game "doesn't do anything major that the series hasn't done before",[53] "does little in term of innovation"[54] and "doesn't offer much beyond the other titles in the series".[9] Also criticised was the game's camera and control system which, despite having been improved from previous games,[5][53] was described as "awkward, disorienting, and motion sickness-inducing".[51] Some criticism also stemmed from the length of the game,[53] as it "can be easily beaten in a handful of hours".[9] In their retrospective review, Honestgamers.com wrote "What began as uncommon brilliance on the PlayStation, has degraded into a convoluted and senseless exercise in flexing visceral muscle while offering less and less in the way of engaging play. And the downward spiral began here", though that same review also praised the quality of the visuals, sound and music stating "it’s a work of art by PS2 standards". [56]