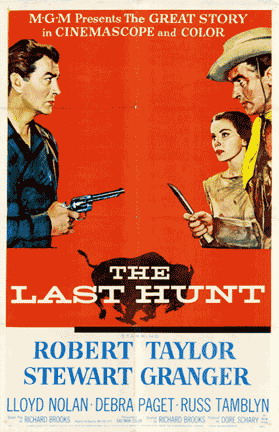 "The Last Hunt" is a 1956 western film directed by and produced by Dore Schary. The was by Richard Brooks from a novel by . The music score was by and the cinematography by .

The film stars Robert Taylor and with , and .

The film was shot at the and in during the then-annual "thinning" of the buffalo herd. Actual footage of buffalo being shot and killed (by government marksmen) was used for the film. Brooks adapted the Milton Lott novel of the same name for the screenplay. The film was the first of only three westerns directed by Brooks, and was his first film following the critically acclaimed "" (1955).

Sandy McKenzie () sets out on his last hunt with his long-time partner, the obsessive Charles Gilson (Robert Taylor). While McKenzie has grown tired of buffalo hunting, Gilson derives a pleasure from his "stands" – killing an entire herd of buffalo at one time. When Gilson chases down and kills an Indian raiding party, he takes an Indian woman and her child captive. The presence of the native woman causes tension and Gilson becomes increasingly paranoid and deranged, leading to a stand-off between the two former partners.