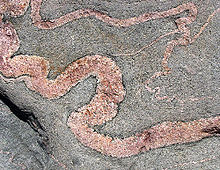 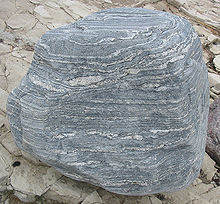 Migmatite on the coast of Saaremaa.

Migmatite is a rock at the frontier between igneous and metamorphic rocks. They can also be known as diatexite.

Migmatites form under extreme temperature conditions during prograde metamorphism, where partial melting occurs in pre-existing rocks. Migmatites are not crystallized from a totally molten material, and are not generally the result of solid-state reactions. Migmatites are composed of a leucosome, new material crystallized from incipient melting, and a mesosome, old material that resisted melting. Commonly, migmatites occur within extremely deformed rocks that represent the base of eroded mountain chains, typically within Precambrian cratonic blocks.

Migmatites often appear as tightly, incoherently folded (ptygmatic folds) dikelets, veins and segregations of light colored granitic composition called leucosome, within dark colored amphibole and biotite rich material called the melanosome. The light colored material has the appearance of having been mobilized or molten. Once enough leucosomes join up to form a network and granite is produced, the residual material is known as restite.

Migmatite textures are the product of thermal softening of the metamorphic rocks. Schlieren textures are a particularly common example of granite formation in migmatites, and are often seen in restite xenoliths and around the margins of 'S-type granites.

Ptygmatic folds are formed by highly plastic ductile deformation of the gneissic banding, and thus have little to no relationship to a defined foliation unlike most regular folds. Ptygmatic folds can occur restricted to compositional zones of the migmatite, for instance in fine-grained shale protoliths versus in coarse granoblastic sandy protolith.

Migmatite and the origin of Granites

For migmatised argillaceous rocks, the partial or fractional melting would first produce a volatile and incompatible-element enriched rich partial melt of granitic composition. Such granites derived from sedimentary rock protoliths would be termed S-type granite, are typically potassic, sometimes containing leucite, and would be termed adamellite, granite sensu stricto and syenite. Volcanic equivalents would be rhyolite and rhyodacite.

Migmatised igneous or lower-crustal rocks which melt do so to form a similar granitic I-type granite melt, but with distinct geochemical signatures and typically plagioclase dominant mineralogy forming monzonite, tonalite and granodiorite compositions. Volcanic equivalents would be dacite, trachyte and trachydacite.

It is difficult to melt mafic metamorphic rocks except in the lower mantle, so it is rare to see migmatitic textures in such rocks. However, eclogite and granulite sensu stricto are roughly equivalent mafic rocks.

The Finnish petrologist Jakob Sederholm first used the term in 1907 for rocks within the Scandinavian craton in southern Finland. The term was derived from the Greek word μιγμα: migma meaning a mixture.