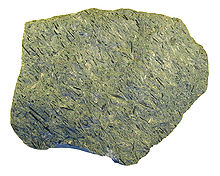 Phonolite is a rare igneous, volcanic (extrusive) rock of intermediate (between felsic and mafic) composition, with aphanitic to porphyritic texture.

The name phonolite comes from the Greek meaning (more or less) "sounding stone" because of the metallic sound it produces if an unfractured plate is hit, hence the English name clinkstone.

Phonolite is unusual in that it forms from a highly silica undersaturated melt by low degrees of partial melting (less than 10%) of highly aluminous lower crustal rocks such as tonalite, monzonite and metamorphic rocks. Melting of such rocks to a very low degree promotes the liberation of aluminium, potassium, sodium and calcium via melting of feldspar, with some involvement of mafic minerals. The melt formed is silica undersaturated (ie; quartz is absent from the melts or solidified rocks), with feldspathoid species dominating over feldspar species in the melt.

Phonolite occurrences are associated with a few geological processes and tectonic events, which can lead to the melting of appropriate precursor lithologies. These include intracontinental hotspot volcanism, such as may form above mantle plumes covered by thick continental crust. A-type granites and alkaline igneous provinces are usually associated with phonolites. Phonolites may also be produced by low degree partial melting of underplates of granitic material in collisional orogenic belts.

Phonolites, as they are products of low degree partial melts, are silica undersaturated, and have feldspathoids in their normative mineralogy.

Phonolite is a fine-grained equivalent of nepheline syenite, and the genesis of such magmas is discussed in the treatment of that rock type.

Phonolites can be of interest as dimension stone or as aggregate for gravels.

Phonolite tuff was used as a source of flint for adze heads and such by prehistoric man from Hohentwiel and Hegau, Germany.[7]