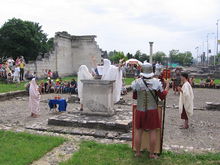 Many practitioners of folk religions live outside of the original cultures and territories from which those historical religions arose, and reconstructonists consequently face the problem of understanding, and then implementing, the worldview of pre-modern rural societies in a modern, possibly urban environment.[1]

The term "Reconstructionist Paganism" is thought to have been coined by Isaac Bonewits in the late 1970s. Bonewits has said that he is not sure whether he "got this use of the term from one or more of the other culturally focused Neopagan movements of the time, or if [he] just applied it in a novel fashion."[2] Margot Adler later used the term "Pagan Reconstructionists" in the 1979 edition of Drawing Down the Moon to refer to those who claimed to adhere to some sort of historical religion. This emphasis on reconstruction is in ostensible contrast to more fanciful approaches to "paganism" in Romanticism, as seen for example in Germanic mysticism.

Reconstructionist Paganism has evolved into Polytheistic Reconstructionism, and is a distinct movement from the syncreticism and eclecticism of popular Neopagan culture, and the Wiccan ritual format that has been widely adopted by many Neopagan groups. Reconstructionist religions are based on the surviving historical record, and on surviving folk practices of the culture in question.

According to Linzie (2004), the reconstructionist movement originates around 1970 with early attempts to reconstruct pre-Christian religions, with Germanic neopaganism in the USA, the UK and Iceland focussing on Norse religion of the Viking Age, and reconstruction of Hellenic polytheism in Greece, and of Baltic polytheism with Romuva.

In a second phase beginning in the 1990s, these movements have been joined by serious attempts at reconstructing Roman polytheism and Celtic polytheism (see Celtic Reconstructionist Paganism). Many of these groups focus on the 1st millennium AD (with the exception of Greek and Roman polytheism which is already well-attested in sources of the mid to late 1st millennium BC), up to the period of Christianization of the respective populations. Most also include folkloric practices that have survived into recent history or, in some cases, the present day.

Linzie (2004) enumerates the difference between reconstructionist Neopaganism and "classical" Neogapanism as found in Eighteenth to mid Twentieth century movements (including Germanic mysticism, early Neodruidism and Wicca) as follows:

The use of the terms "Pagan" and "Neopagan" to apply to polytheistic reconstructionists is controversial. Some reconstructionist, ethnic and indigenous religious groups take great issue with being referred to as "Pagan" or "Neopagan," viewing "Pagan" as a pejorative term used in the past by institutions attempting to destroy their cultures and religions.[4] In addition, reconstructionists may choose to reject the terms "Pagan" and "Neopagan" in order to distance themselves from aspects of popular Neopaganism, such as eclecticism, cultural appropriation, the practice of magic, and a tendency to conduct rituals within a Wiccan-derived format, that they find irrelevant or even inimical to their religious practice.[5][6]

Other reconstructionist groups actively self-identify as "Pagan Reconstructionists" and may participate in pan-Pagan organizations or gatherings such as Pagan Pride Day.[7] However, even among those who see themselves as part of the broader, Pagan or Neopagan spectrum, or who simply see some members of the Pagan community as allies, there is still a refusal to accept or identify with the more problematic aspects of that community, such as the above-noted eclecticism, cultural appropriation or Wiccan-inspired ritual structures. Many Polytheistic Reconstructionists see Reconstructionism as the older current in the Pagan community, and are unwilling to give up this part of their history simply because eclectic movements are currently more fashionable.[8][not in citation given]