The pineal gland (also called the pineal body, epiphysis cerebri, epiphysis, conarium or the "third eye") is a small endocrine gland in the vertebrate brain. It produces the serotonin derivative melatonin, a hormone that affects the modulation of wake/sleep patterns and seasonal functions.[1][2] Its shape resembles a tiny pine cone (hence its name), and it is located near the centre of the brain, between the two hemispheres, tucked in a groove where the two rounded thalamic bodies join.

The pineal gland is reddish-gray and about the size of a grain of rice (5–8 mm) in humans, located just rostro-dorsal to the superior colliculus and behind and beneath the stria medullaris, between the laterally positioned thalamic bodies. It is part of the epithalamus.

The pineal gland is a midline structure shaped like a pine cone [3] , and is often seen in plain skull X-rays, as it is often calcified. 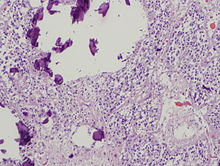 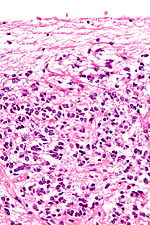 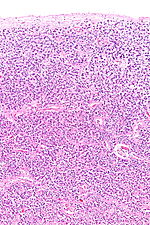 The pineal body consists in humans of a lobular parenchyma of pinealocytes surrounded by connective tissue spaces. The gland's surface is covered by a pial capsule.

The pineal gland consists mainly of pinealocytes, but four other cell types have been identified. As it is quite cellular (in relation to the cortex and white matter) it may be mistaken for a neoplasm.[4]

The pineal gland receives a sympathetic innervation from the superior cervical ganglion. However, a parasympathetic innervation from the sphenopalatine and otic ganglia is also present. Further, some nerve fibers penetrate into the pineal gland via the pineal stalk (central innervation). Finally, neurons in the trigeminal ganglion innervate the gland with nerve fibers containing the neuropeptide, PACAP. Human follicles contain a variable quantity of gritty material, called corpora arenacea (or "acervuli," or "brain sand"). Chemical analysis shows that they are composed of calcium phosphate, calcium carbonate, magnesium phosphate, and ammonium phosphate.[5] In 2002, deposits of the calcite form of calcium carbonate were described.[6] Calcium, phosphorus[7] and fluoride[8] deposits in the pineal gland have been linked with aging.

Pinealocytes in many non-mammalian vertebrates have a strong resemblance to the photoreceptor cells of the eye. Some evolutionary biologists believe that the vertebrate pineal cells share a common evolutionary ancestor with retinal cells.[9]

In some vertebrates, exposure to light can set off a chain reaction of enzymatic events within the pineal gland that regulate circadian rhythms.[10] Some early vertebrate fossil skulls have a pineal foramen (opening). This correlates with the physiology of the modern "living fossils," the lamprey and the tuatara, and some other vertebrates that have a parietal organ or "third eye," which, in some of them, is photosensitive. The third eye represents evolution's earlier approach to photoreception.[11] The structures of the third eye in the tuatara are homologous to the cornea, lens and retina, though the latter resembles that of an octopus rather than a vertebrate retina. The asymmetrical whole consists of the "eye" to the left and the pineal sac to the right. "In animals that have lost the parietal eye, including mammals, the pineal sac is retained and condensed into the form of the pineal gland."[11]

Unlike much of the rest of the mammalian brain, the pineal gland is not isolated from the body by the blood-brain barrier system;[12] it has profuse blood flow, second only to the kidney.[8]

Fossils seldom preserve soft anatomy. The brain of the Russian Melovatka bird, about 90 million years old, is an exception, and it shows a larger-than-expected parietal eye and pineal gland.[13]

In humans and other mammals, the light signals necessary to set circadian rhythms are sent from the eye through the retinohypothalamic system to the suprachiasmatic nuclei (SCN) and the pineal.

The pineal gland was originally believed to be a "vestigial remnant" of a larger organ. In 1917 it was known that extract of cow pineals lightened frog skin. Dermatology professor Aaron B. Lerner and colleagues at Yale University, hoping that a substance from the pineal might be useful in treating skin diseases, isolated and named the hormone melatonin in 1958.[14] The substance did not prove to be helpful as intended, but its discovery helped solve several mysteries such as why removing the rat's pineal accelerated ovary growth, why keeping rats in constant light decreased the weight of their pineals, and why pinealectomy and constant light affect ovary growth to an equal extent; this knowledge gave a boost to the then new field of chronobiology.[15]

Melatonin is N-acetyl-5-methoxy-tryptamine, a derivative of the amino acid tryptophan, which also has other functions in the central nervous system. The production of melatonin by the pineal gland is stimulated by darkness and inhibited by light.[16] Photosensitive cells in the retina detect light and directly signal the SCN, entraining its rhythm to the 24-hour cycle in nature. Fibers project from the SCN to the paraventricular nuclei (PVN), which relay the circadian signals to the spinal cord and out via the sympathetic system to superior cervical ganglia (SCG), and from there into the pineal gland. The function(s) of melatonin in humans is not clear; it is commonly prescribed for the treatment of circadian rhythm sleep disorders.

The compound pinoline is also produced in the pineal gland; it is one of the beta-carbolines.[citation needed]

The human pineal gland grows in size until about 1–2 years of age, remaining stable thereafter,[17][18] although its weight increases gradually from puberty onwards.[19][20] The abundant melatonin levels in children are believed to inhibit sexual development, and pineal tumors have been linked with precocious puberty. When puberty arrives, melatonin production is reduced. Calcification of the pineal gland is typical in adults.

Pineal cytostructure seems to have evolutionary similarities to the retinal cells of chordates.[9] Modern birds and reptiles have been found to express the phototransducing pigment melanopsin in the pineal gland. Avian pineal glands are believed to act like the SCN in mammals.[23]

Studies on rodents suggest that the pineal gland may influence the actions of recreational drugs, such as cocaine,[24] and antidepressants, such as fluoxetine (Prozac),[25] and its hormone melatonin can protect against neurodegeneration.[26]

All tumors involving the pineal gland are rare; most (50% to 70%) arise from sequestered embryonic germ cells. They most commonly take the form of so-called germinomas,resembling testicular seminoma or ovarian dysegerminoma. Other lines of germ cell differentiation include embryonal carcinomas; choriocariconmas; mixtures of germinom, embryonal carcinoma, and choriocarcinoma; and , uncommonly, typical teratomas (usually benign). Whether to charcterize these germ cell neoplasms as pinealomas is still a subject of debate, but most pinealophiles favor restricting the terms pinealoma to neoplasms arising from the pineocytes.

These neoplasms are divided into two catergories, pineoblastomas and pineocytomas,[citation needed] based on their level of differentiation, which in turn, correlates with their neoplastic aggressiveness. The clinical course of patients with pineocytomas is prolonged, averaging 7 years.[citation needed] The manifestations are the consequence of their pressure effects and consist of visual disturbances, headache, mental deterioration, and sometimes dementia-like behaviour.[citation needed] The lesions being located where they are, it is understandable that successful excision is at best difficult.

The secretory activity of the pineal gland is only relatively understood. Historically, its location deep in the brain suggested to philosophers that it possessed particular importance. This combination led to its being a "mystery" gland with myth, superstition and occult theories surrounding its perceived functions.

René Descartes, who dedicated much time to the study of the pineal gland,[27] called it the "seat of the soul."[28] He believed that it was the point of connection between the intellect and the body.[29] Descartes attached significance to the gland because he believed it to be the only section of the brain which existed as a single part, rather than one half of a pair. He argued that because a person can never have "more than one thought at a time", external stimuli must be united within the brain before being considered by the soul, and he considered the pineal gland to be situated in "the most suitable possible place for this purpose", located centrally in the brain and surrounded by branches of the carotid arteries.[27]

Baruch de Spinoza criticized Descartes' viewpoint for neither following from self-evident premises nor being "clearly and distinctly perceived" (Descartes having previously asserted that he could not draw conclusions of this sort), and questioned what Descartes meant by talking of "the union of the mind and the body".[30]

The notion of a "pineal-eye" is central to the philosophy of the French writer Georges Bataille, which is analyzed at length by literary scholar Denis Hollier in his study Against Architecture. In this work Hollier discusses how Bataille uses the concept of a "pineal-eye" as a reference to a blind-spot in Western rationality, and an organ of excess and delirium.[31] This conceptual device is explicit in his surrealist texts, The Jesuve and The Pineal Eye.[32]

The pineal body is labeled in these images.