The whale shark, Rhincodon typus, is a slow-moving filter feeding shark, the largest extant fish species. The largest confirmed individual had a length of 12.65 metres (41.50 ft) and a weight of more than 21.5 tonnes (47,000 lb), but unconfirmed claims report considerably larger whale sharks. This distinctively-marked fish is the only member of its genus Rhincodon and its family, Rhincodontidae (called Rhinodontes before 1984), which belongs to the subclass Elasmobranchii in the class Chondrichthyes. This shark, found in tropical and warm oceans, lives in the open sea with a lifespan of about 70 years.[3] The species originated about 60 million years ago. Although whale sharks have very large mouths, they feed mainly, though not exclusively, on plankton, microscopic plants and animals. However, the BBC program Planet Earth filmed a whale shark feeding on a school of small fish. The same documentary showed footage of a whale shark timing its arrival to coincide with the mass spawning of fish shoals and feeding on the resultant clouds of eggs and sperm. [1]

The species was distinguished in April 1828, following the harpooning of a 4.6 metres (15.1 ft) specimen in Table Bay, South Africa. Andrew Smith, a military doctor associated with British troops stationed in Cape Town described it the following year.[4] He published a more detailed description in 1849. The name "whale shark" comes from the fish's physiology; as large as a whale, it too is a filter feeder.

The whale shark inhabits all tropical and warm-temperate seas. They are known to migrate every spring to the continental shelf of the central west coast of Australia. The coral spawning of the area's Ningaloo Reef provides the whale shark with an abundant supply of plankton. Primarily pelagic, seasonal feeding aggregations occur at several coastal sites such as the southern and eastern parts of South Africa; Gladden Spit in Belize; Ningaloo Reef in Western Australia; Great Rann of Kutch in India; Útila in Honduras; Donsol, Pasacao and Batangas in the Philippines; off Isla Mujeres and Isla Holbox in Yucatan, Mexico; Ujung Kulon National Park in Indonesia; Nosy Be in Madagascar Off Tofo Reef near Inhambane in Mozambique, and the Tanzanian islands of Mafia, Pemba, Zanzibar and, very rarely, Eilat, Israel. Although typically seen offshore, it has been found closer to land, entering lagoons or coral atolls, and near the mouths of estuaries and rivers. Its range is generally restricted to about ±30° latitude. It is capable of diving to depths of 700 metres (2,300 ft), and is migratory.[3]

As a filter feeder it has a capacious mouth which can be up to 1.5 metres (4.9 ft) wide and can contain between 300 and 350 rows of tiny teeth.[5] It has five large pairs of gills. Two small eyes are located towards the front of the shark's wide, flat head. The body is mostly grey with a white belly; three prominent ridges run along each side of the animal and the skin is marked with a "checkerboard" of pale yellow spots and stripes. These spots are unique to each individual and are useful for counting populations. Its skin can be up to 10 centimetres (3.9 in) thick. The shark has a pair each of dorsal fins and pectoral fins. Juveniles' tails have a larger upper than lower fin while the adult tail becomes semi-lunate (crescent-shaped). Spiracles are just behind the eyes. 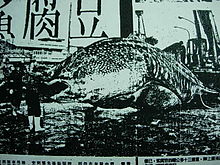 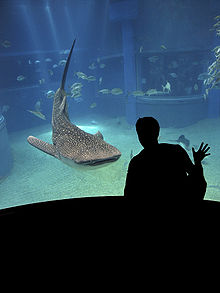 The whale shark is not an efficient swimmer since it uses its entire body, unusual for fish, to attain an average speed of around 5 kilometres per hour (3.1 mph). The whale shark is largest animal in the world outside of the large cetaceans. The average size of adult whale sharks is estimated at 9.7 metres (31.82 ft) and 9 tonnes (20,000 lb).[7] The largest verified specimen was caught on November 11, 1947, near Baba Island, in Karachi, Pakistan. It was 12.65 metres (41.50 ft) long, weighed more than 21.5 tonnes (47,000 lb), and had a girth of 7 metres (23.0 ft).[7] Stories exist of vastly larger specimens — quoted lengths of 18 metres (59 ft) are not uncommon in the popular shark literature — but no scientific records support their existence. In 1868 the Irish natural scientist Edward Perceval Wright obtained several small whale shark specimens in the Seychelles, but claimed to have observed specimens in excess of 15 metres (49.2 ft), and tells of reports of specimens surpassing 21 metres (68.9 ft).

The whale shark is a filter feeder — one of only three known filter feeding shark species (along with the basking shark and the megamouth shark). It feeds on macro-algae, plankton, krill, Christmas Island red crab larvae,[9] and small nektonic life such as small squid or vertebrates. It also feeds on small fish and the clouds of eggs and sperm during mass spawning of fish shoals.[1] The many rows of teeth play no role in feeding; in fact, they are reduced in size in the whale shark. Instead, the shark sucks in a mouthful of water, closes its mouth and expels the water through its gills. During the slight delay between closing the mouth and opening the gill flaps, plankton is trapped against the dermal denticles which line its gill plates and pharynx. This fine sieve-like apparatus, which is a unique modification of the gill rakers, prevents the passage of anything but fluid out through the gills, trapping anything above 2 to 3 millimetres (0.079 to 0.12 in) in diameter. Material caught in the filter between the gill bars is swallowed. Whale sharks have been observed "coughing" and it is presumed that this is a method of clearing a build up of food particles in the gill rakers. Whale sharks migrate to feed and possibly to breed.[3][10][11]

The whale shark is an active feeder, targeting concentrations of plankton or fish. It is able to ram filter feed or can gulp in a stationary position. This is in contrast to the passive feeding basking shark, which does not pump water. Instead, it swims to force water across its gills.[3][10] 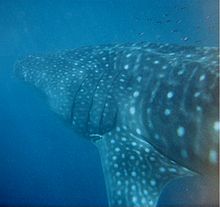 A whale shark at Ningaloo Reef

Despite its size, the whale shark does not pose significant danger to humans. Although massive, whale sharks are docile fish and sometimes allow swimmers to catch a ride.[12] Whale sharks are actually quite gentle and can play with divers. Divers and snorkellers can swim with this giant fish without risk, apart from unintentional blows from the shark’s large tail fin.[13] In July 2011, several sources reported, with photos, an incident of a diver who, allegedly, was nearly sucked into the mouth of a whale shark (but escaped unharmed) off the coast of Isla Mujeres, Mexico.[14][15]

A whale shark in the Georgia Aquarium

On March 7, 2009, marine scientists in the Philippines discovered what is believed to be the smallest living specimen of the whale shark. The young shark, measuring only 38 centimetres (15 in), was found with its tail tied to a stake at a beach in Pilar, Philippines, and was released into the wild. Based on this discovery some scientists no longer believe that this area is just a feeding ground; it may also be that this site is a birthing ground as well.[21]

The whale shark is targeted by commercial fisheries in several areas where they seasonally aggregate. The population is unknown and the species is considered vulnerable by the IUCN.[2] In 1998, the Philippines banned all fishing, selling, importing and exporting of whale sharks for commercial purposes,[22] followed by India in May 2001,[23] and Taiwan in May 2007.[24] They are currently listed as a vulnerable species; however, they continue to be hunted in parts of Asia, such as Taiwan and the Philippines.

In 2006, Resorts World Sentosa announced its plans to bring in whale sharks for their marine life park. This was met with opposition from seven notable conservation societies. In 2009, the plan was shelved in favour of a search for other alternatives.[25][26]

In 2010, the Gulf of Mexico oil spill resulted in 4,900,000 barrels (780,000 m3) of oil flowing into an area south of the Mississippi River Delta, where one-third of all whale shark sightings in the northern part of the gulf have occurred in recent years. Sightings confirmed that the whale sharks were unable to avoid the oil slick which was situated on the surface of the sea where the whale sharks feed for several hours at a time. However, no dead whale sharks have been found.[27] . 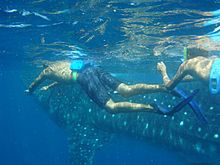 Known as a deity in a Vietnamese culture, the whale shark is called "Ca Ong", which literally translates as "Sir Fish".[28]

In Mexico, and throughout much of Latin America, the whale shark is known as "pez dama" or "domino" for its distinctive patterns of spots. However, they go by "Sapodilla Tom" in Belize due to the regularity of sightings near the Sapodilla Cayes on the Belize Barrier Reef.

In Africa, the names for the whale shark are very evocative: "papa shillingi" in Kenya came from the myth that God threw shillings upon the shark which are now its spots. In Madagascar the name is "marokintana" meaning "many stars".

Javanese also reference the stars by calling it "geger lintang," meaning "stars in the back". In the Philippines, it is called "butanding", while in Madurese, it is known as "kikaki".

For a topical guide to this subject, see Outline of sharks.