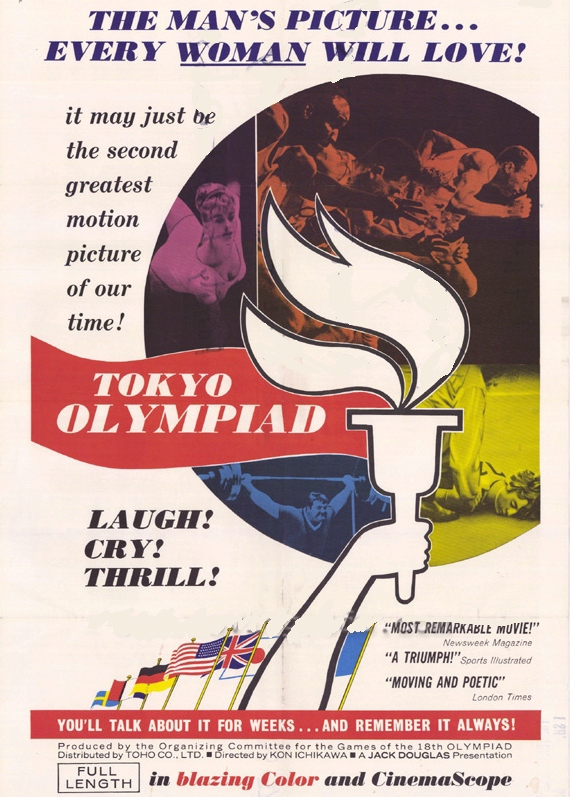 "Tokyo Olympiad" (東京オリンピック "Tōkyō Orinpikku") is a 1965 directed by which documents the in . Like 's "Olympia", which documented the in , Ichikawa's film was considered a milestone in documentary filmmaking. However, "Tokyo Olympiad" keeps its focus more on the atmosphere of the games and the human side of the athletes instead of concentrating only on the winners and the results.

The were seen as vitally important to the Japanese government. Much of Japan's infrastructure had been destroyed during the the second World War and the Olympics were seen as a chance to re-introduce Japan to the world and show off its new modernised roads and industry as well as its burgeoning economy. Every Olympics since the first modern games in had been committed to film to some extent to another, usually financed by the for reasons of posterity. For the 1964 Olympics the Japanese government decided to finance their own film and initially hired who, at the time, was the most famous Japanese director worldwide thanks to films such as and . However, Kurosawa's famous tendency for complete control - he demanded to not only direct the film but the opening and closing ceremonies as well - led to his dismissal. This led to the bringing in of Ichikawa, who had a reputation of coming in to productions where events hadn't followed the initial plans.

Ichikawa's vision of the Tokyo Olympics was controversial at the time as it was the opposite of what the Japanese government wanted and expected of the film. Ichikawa presented a film which was very much a cinematic and artistic recording of the events, more concerned with the athletes than the events, than the journalistic, historical recording that was desired by its financiers. As a result, the Japanese Olympic Committee forced Ichikawa to re-edit the picture to better suit their requirements, with the final, re-edited, version clocking in at 93 minutes rather than the original's 170 minutes.

The film is held in very high regard and is seen, alongside 's "Olympia" as one of the best films about the Olympics and one of the best sports documentaries of all time. It holds an average rating of 8.2 on and is certified 100% fresh on from 11 reviews.

The film is somewhat difficult to find in the west, with the DVD version . It can be found on eBay fairly regularly, however, often fetching prices of between £35/$70. It can also be found on video from in the US and in the UK, though these too are out of print and can fetch prices of upwards of £30/$60.