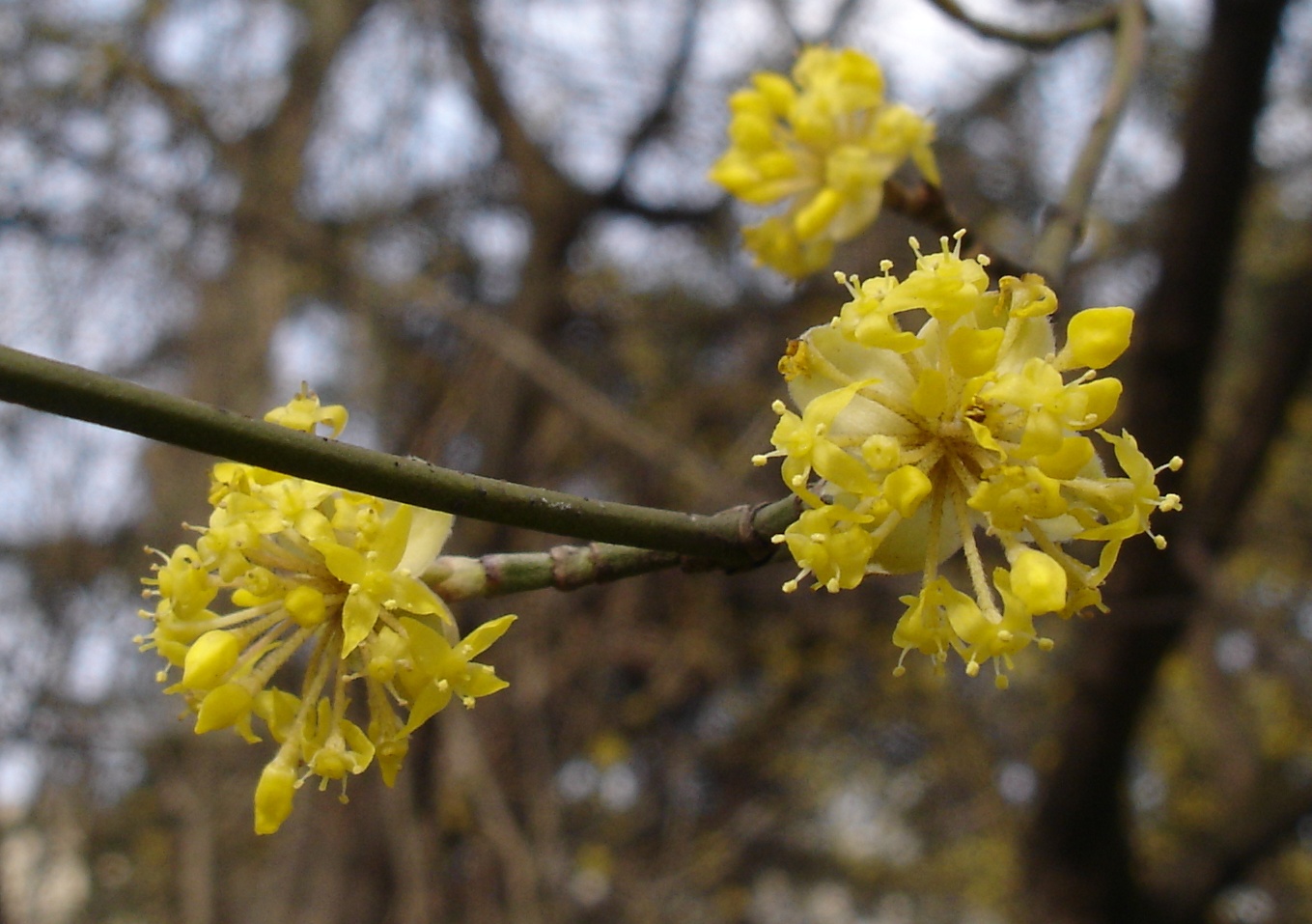 The Dogwoods comprise a group of 30-50 species of mostly s growing as s and s, some species are herbaceous perennial plants and a few of the woody species are evergreen. They are in the family , divided into one to nine genera or subgenera (depending on botanical interpretation). Four subgenera are enumerated here.

Most species have opposite leaves and a few have alternate. The of all species is a with one or two seeds. s have four parts.

Many species in subgenus "Swida" are iferous shrubs, growing along waterways. Several of these are used in naturalizing landscape plantings, especially the species with bright red or bright yellow stems. Most of the species in subgenus "Benthamidia" are small trees used as s. As flowering trees, they are of rare elegance and beauty, comparable to , , and the for their ornamental qualities.

The of several species in the subgenera "Cornus" and "Benthamidia" is edible, though without much flavour. The berries of those in subgenus "Swida" are mildly toxic to people, though readily eaten by s. Dogwoods are used as food plants by the e of some species including Emperor Moth, The Engrailed, and the following case-bearers of the genus "": "C. ahenella", "C. salicivorella" (recorded on "Cornus canadensis"), "C. albiantennaella", "C. cornella" and "C. cornivorella" (The latter three feed exclusively on "Cornus").They were used by pioneers to brush their teeth.The pioneers would peel off the bark, bite the twig and then scrub their teeth.

Numerous varieties of Dogwood are represented in the insignia of U.S. states and Canadian provinces.

Etymology and other meanings

The word dogwood comes from dagwood, from the use of the slender stems of very hard for making 'dags' (daggers, skewers).

Larger items were also made of dogwood such as the screw in basket-style wine or fruit presses, also made were the first styles of the tennis racket made out of the bark cut in thin strips.

Another earlier name of the dogwood in English is the whipple-tree. Geoffrey Chaucer uses the word whippletree in the Canterbury Tales (The Knight's Tale, verse 2065) to refer to the dogwood. Another larger item made of dogwood still bears the name of the tree from which it is carved. The whippletree is an element of the traction of a horse-drawn cart, which links the drawpole of the cart to the harnesses of the horses in file.

The name Dog-Tree entered English vocabulary by 1548, and had been further transformed to Dogwood by 1614. Once the name dogwood was affixed to the tree, it soon acquired a secondary name as the Hound's Tree, while the fruits came to be known as dogberries or houndberries (the latter a name also for the berries of & alluding to Hecate's hounds).

It is possible that the common name of Dogwood may have come because “dogs were washed with a brew of its bark, hence Dogwood.” Another name is blood-twig, due to the red colour it turns in autumn.

In and in colloquial use, the term dogwood winter may be used to describe a in spring.

The legend of the dogwood

There is a of unknown origin that proclaims that the cross used to crucify Jesus was constructed of dogwood. [ [http://www.footprint.co.za/aileen_old_legend_of_the_dogwood.htm The Old Legend of the Dogwood ] ] As the story goes, during the time of Jesus, the dogwood was larger and stronger than it is today and was the largest tree in the area of Jerusalem. After his crucifixion, Jesus changed the plant to its current form: he shortened it and twisted its branches to assure an end to its use for the construction of crosses. He also transformed its inflorescence into a representation of the crucifixion itself, with the four white cross-shaped, which represent the four corners of the cross, each bearing a rusty indentation as of a nail and the red s of the flower, represents Jesus' , and the clustered red fruit represent his blood. [ [http://www.gotquestions.org/legend-dogwood.html What is the legend of the dogwood tree? Was the cross Jesus was crucified on made of dogwood? ] ]