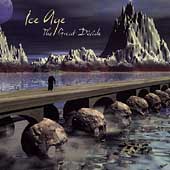 "The Great Divide" is the debut by the group Ice Age, released in 1999 (see ). All music written, arranged, and performed by Ice age. Lyrics by Josh Pincus except "Join" and "To Say Goodbye" also by Hal Aponte.

The only voice heard (not counting the chicken sound effects) on the instrumental "Spare Chicken Parts" is a clip from "" of astronaut Dave Bowman saying "Open the pod bay doors, please, Hal."