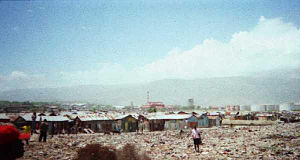 Cité Soleil (Kreyol: Site Solèy, English: Sun City) is an extremely impoverished and densely populated commune located in the Port-au-Prince metropolitan area in Haiti. Cité Soleil originally developed as a shanty town and grew to an estimated 200,000 to 400,000 residents, the majority of whom live in extreme poverty.[1] The area is generally regarded as one of the poorest and most dangerous areas of the Western Hemisphere and it is one of the biggest slums in the Northern Hemisphere. The area has virtually no sewers, stores, electricity, health care facilities or schools. For several years until 2007, the area was ruled by a number of gangs, each controlling their own sectors. But government control was reestablished after a series of operations in early 2007 by the United Nations Stabilization Mission in Haiti (MINUSTAH).[2]

The neighborhood is located at the western end of the runway of Toussaint Louverture International Airport and adjoins the grounds of the former Hasco sugar complex. It began with the construction in 1958 of homes for 52 families. In the summer of 1966, a mysterious fire in the slum of La Saline displaced many of its residents. 1,197 homes were built there and it was named Cité Simone, after Haiti's First Lady. In 1972, a major fire near the central market of Port-au-Prince displaced yet more people who ended up in the Boston section of Cité Simone. In 1983, the census recorded 82,191 people in Cité Simone.[1]

Originally designed to house sugar workers, Cité Simone later housed manual laborers for a local Export Processing Zone (EPZ). Neoliberal reforms beginning in the early 1970s made this place a magnet for squatters from around the countryside looking for work in the newly constructed factories. This movement accelerated in the early 1980s with the destruction of the Creole pigs by American order in response to an African swine flu outbreak, followed by the rise of Finance Minister Leslie Delatour who took this post following the ouster of Jean-Claude Duvalier in 1986. Delatour openly advocated the depopulation of much of the Haitian countryside and that these people work instead in cities, living in places such as the newly-named Cité Soleil, though not for Hasco that Delatour shut down in 1987. This industrial sector was however damaged following the 1991 coup d'état that deposed President Jean-Bertrand Aristide, causing a boycott of Haitian products that closed the EPZ.[3] Cité Soleil continued to be plagued by extreme poverty and persistent unemployment, with high rates of illiteracy.[2]

Half of the houses of Cité Soleil are made of cement with a metal roof, half are made completely of scavenged material. An estimated 60 to 70% of houses have no access to a latrine, particularly in the marshy Brooklyn area which includes Cité Carton.[2]

Armed gangs roamed the streets and terrorized the neighborhood. Every few blocks was controlled by one of more than 30 armed factions.[4] Though the gangs no longer rule, murder, rape, kidnapping, looting, and shootings are still common. The area has been called a "microcosm of all the ills in Haitian society: endemic unemployment, illiteracy, non-existent public services, unsanitary conditions, rampant crime and armed violence".[5]

After the 2010 Haiti earthquake, it took nearly two weeks for relief aid to arrive in Cité-Soleil.[6] Although the US military had willingly accepted their new role, their relief efforts have been criticized by some as insufficient.[7]

Most of the residents of Cité-Soleil are children or young adults. Although the life expectancy in Haiti is to age 52, few live past the age of 50 as many die from diseases, such as AIDS, or from violence.[2] At times Cité Soleil has been filled with armed gangs. The vast majority of residents of Cité Soleil remained loyal to President Jean-Bertrand Aristide and his Fanmi Lavalas movement. Unlike Haiti's unelected past governments, Lavalas governments invested money into parks, literacy programs and medical centers in Cité Soleil.[citation needed]

Politically affiliated gangs or militias, often with quasi-official powers, have been a regular element of Haitian politics throughout the country's history.

The fighting led to wide scale charges by neighborhood residents that the United Nations stabilizing force has permitted conditions that led to the death of unarmed bystanders.[8]In 2004 they were accused of ignoring violence by the Haitian police, the criminal roots of the kidnapping and the undermining of Aristide's security police force.[9]

During mid-1990s, the city's population was terrorized by armed gangs which drove the local police out; this situation prevented officials aid workers from intervening to provide help.[10] In 1999, Cité Soleil was set on fire by a gang and at least 50 shacks were burned.[11] By 2002, the violence escalated as the gangs began warring with each other in addition to preying on ordinary people. Many inhabitants had temporarily left to escape the turmoil.[12] In a series of operations from 2004 to 2007, UN peacekeepers tried to seize control from the gangs in Cité Soleil and end the anarchy.[13] Although the United Nations Stabilization Mission (MINUSTAH) has been deployed since 2004, it continues to struggle for control over the armed gangs and the violent confrontations continue. MINUSTAH maintains an armed checkpoint at the entrance to Cité Soleil and the road is blocked with armed vehicles.[2] In December, 2004, a group of armed ex-soldiers occupied ex-president Jean-Bertrand Aristide's home against the wishes of the Haitian government.[14] In January 2006, two Jordanian peacekeepers were killed in Cité Soleil.[15] The UN has described the human rights situation in Haiti as "catastrophic".[16]

Since 2004, the United Nations Stabilization Mission (MINUSTAH) has been in Haiti and it now numbers 8,000 troops but continues to struggle for control over the armed gangs. In October 2006 a group of heavily armed Haitian police were able to enter Cité Soleil for the first time in three years and were able to remain one hour as armored UN troops patrolled the area. Since this is where the armed gangs take their kidnap victims, the Haitian police's ability to penetrate the area even for such a short time was seen as a sign of progress.[17] The situation of continuing violence is similar in Port-au-Prince. Before Christmas 2006, the UN force announced that it would take a tougher stance against gang members in Port-au-Prince, but since then the atmosphere there has not improved, the armed roadblocks and barbed wire barricades have not been removed. After 4 people were killed and another 6 injured in a UN operation exchange of fire with criminals in Cité Soleil in late January 2007, the United States announced that it would contribute $20 million to create jobs in Cité Soleil.[18][19]

In early February 2007, 700 UN troops flooded Cité Soleil resulting in a major gun battle. Although the troops make regular forcible entries into the area, a spokesperson said this one was the largest attempted so far by the UN troops.[20] On July 28, 2007, Edmond Mulet, the UN Special Representative in Haiti, warned of a sharp increase in lynchings and other mob attacks in Haiti. He said that MINUSTAH, the United Nations Stabilization Mission in Haiti, which now has over 9,000 troops there, will launch a campaign to remind people that lynching is a crime.[21]

On August 2, 2007, the UN Secretary General Ban Ki Moon arrived in Haiti to assess the role of the UN forces, announcing that he would visit Cité Soleil during his visit. He said that as it is Haiti's largest slum, it is the most important target for UN peacekeepers in gaining control over the armed gangs. The Haitian president René Préval has expressed ambivalent feelings about the UN security presence, saying, "If the Haitian people were asked if they wanted the UN forces to leave they would say yes."[22] Survivors at times blame the UN peacekeepers for deaths of relatives.[23]

Critics of MINUSTAH's plan feel that the United Nations mandate is unrealistic, treating a political problem as a security problem.[24] 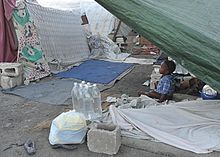 A survivor camp in Cité Soleil in January 2010

On January 12, 2010, at 21:53 UTC (4:53 PM local time) Haiti was struck by a magnitude-7.0 earthquake, the country's most severe earthquake in over 200 years.[25] The epicenter of the quake was just outside the Haitian capital, Port-au-Prince.[26] As the biggest slum of Port-au-Prince, Cité Soleil fared relatively well, as most of its cinder block and corrugated steel shacks survived, and Médecins Sans Frontières reopened its Choscal Hospital located in the heart of the slum, operated between 2005 and 2007 during the gang war, within 24 hours.[27] However, the area remains in desperate need of help, according to World Emergency Relief.[28]

Gang members who escaped from Haiti's damaged prison have returned to the area to continue to commit crimes.[29] The crime rate is rising and police have urged citizens to take matters into their own hands.[30] As of January 23, 2010, Cité Soleil had largely remained neglected by earthquake relief workers and is doing what it can to survive and help on its own.[31]