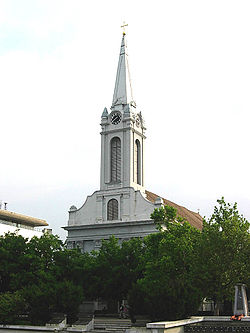 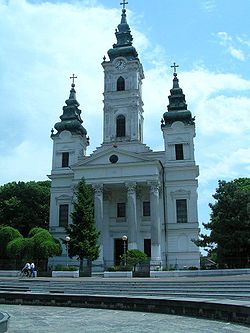 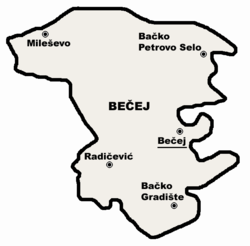 Bečej (Serbian: Бечеј or Bečej, pronounced [bɛ̌tʃɛːj], Hungarian: Óbecse, pronounced [ˈoːbɛtʃɛ], Rusyn: Бечей, Croatian: Bečej, German: Altbetsche, Romanian: Becei, Turkish: Beçe) is a town and municipality located in the South Bačka District in Vojvodina, Serbia. The town has a population of 25,703, while Bečej municipality has 40,877 inhabitants. It is multiethnic town, with Hungarians (45.49%) and Serbs (43.44%) as largest ethnic groups. Linguistically the town has a Slavophonic plurality as Serbs, Yugoslavs, Croats and Montenegrins collectively compose 48.40% of the population.

Bečej was mentioned first during the administration of the Kingdom of Hungary in 1091 under Latin name Bechey[3] and later in 1238 under Hungarian name Becse.[citation needed] Name probably originated from Bechey family that had possessions in this area.[4] In the 15th century (from 1419 to 1441) the town was a possession of the Serbian despot Đurađ Branković. In the end of the 15th century, army of the Kingdom of Hungary led by Serbian despot Vuk Grgurević (Zmaj Ognjeni Vuk) defeated the Ottoman army near Bečej.[5] In 1551, Ottoman army led by Muslim Serb Mehmed paša Sokolović conquered the town.[6] Bečej was administered by the Ottomans between 1551 and 1687 (nominally to 1699) and was part of the Sanjak of Segedin and Budin eyalet.[7] In Ottoman Turkish it was known as "Beçe".

In the end of the 17th century the Ottoman administration was replaced by Habsburg one and settlement was populated by ethnic Serbs from Banat who ran away from the Ottoman Empire. Between 1702 and 1751, the town belonged to the Tisa-Mureş section of the Habsburg Military Frontier. After the abolishment of this part of the Frontier in 1751, many Serbs that lived in the town emigrated to Russia (notably to New Serbia and Slavo-Serbia). They founded a new settlement with name Bečej in New Serbia. To prevent this emigration, the Habsburg authorities formed autonomous District of Potisje with seat in Bečej. District of Potisje existed between 1751 and 1848. The three privileges were given to the district in 1759, 1774 and 1800. First privilege of the District defined its autonomous status, while the second one allowed ethnic Hungarians to settle in the district. In the following period many Hungarians settled in Bečej (the first ones in 1757[8]) and they replaced Serbs as a dominant nation in the town. In 1751, the entire population of the town was composed of Serbs, while in 1774 half of the population was composed of Serbs and another half was composed of Hungarians.[9] According to the 1910 census, the population of Bečej municipality numbered 54,275 people, of whom 30,465 spoke Hungarian and 22,821 Serbian.

Since 1918, Bečej was part of the Kingdom of Serbs, Croats and Slovenes and subsequent South Slavic states. During the Hungarian Axis occupation, in the 1942 raid, 215 inhabitants of the town were murdered by Hungarian forces, of whom 111 were men, 72 women, 13 children, and 19 old people.[12] By nationality, victims included 110 Jews, 102 Serbs, and 1 Hungarian.[13]

Bečej municipality includes the town of Bečej and the following villages:

Note: for settlements with absolute or relative Hungarian majority names are also given in Hungarian.

There are also several sub-settlements in the municipality, including:

Bečej is an ethnically mixed town and municipality.

Ethnic groups in the Bečej town

Ethnic groups in the Bečej municipality

Languages in the Bečej municipality

Languages spoken in the Bečej municipality include:

Historical population of the town 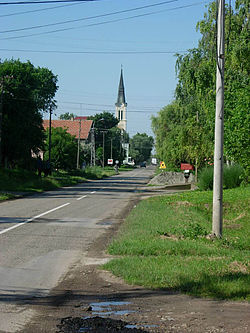 Street in Bečej and The Saint Anthony Padovanian Catholic Church 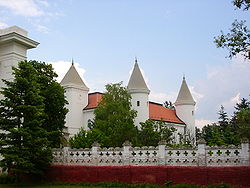 Bečej is twinned with: