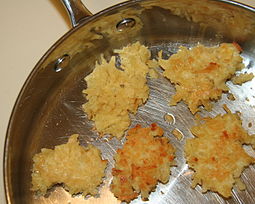 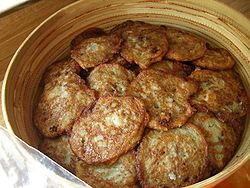 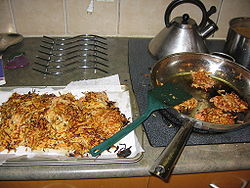 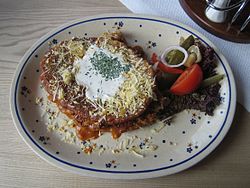 Potato pancakes are shallow-fried pancakes of grated or ground potato, flour and egg, often flavored with grated onion or garlic and seasoning. Potato pancakes may be topped with a variety of condiments, ranging from the savory (such as sour cream or cottage cheese) to the sweet (such as apple sauce or sugar), or they may be served ungarnished. Potato pancakes are sometimes made from mashed potatoes to produce pancake-shaped croquettes.[1]

Potato pancakes are commonly associated with traditional cuisines of Luxembourg, Latvia, Lithuania, Austria, Belarus (as draniki), Germany (f. ex. as Kartoffelpuffer), Poland (as placki ziemniaczane), Ukraine (as deruny), Ashkenazi Jewry (as latkes or latkas (Yiddish: לאַטקעס, Hebrew: לביבה levivah, plural לביבות levivot), Hungary, Slovakia, Persia and the Czech lands (as bramborák or cmunda), although other cuisines (including those of India and Korea) have similar dishes, such as Gamjajeon.[2][dead link] It is also the national dish of Belarus. In Ukrainian, Belarusian and Russian cuisines, potato pancakes are commonly known as deruny (Ukrainian: деруни) or draniki (Russian: драники, Belarusian: дранікі). Throughout Germany, potato pancakes are also very common under the names Reibekuchen or Kartoffelpuffer, and they are eaten either salty (as a side dish) or sweet with apple sauce,[3] sugar and cinnamon; they are a very common menu item during outdoor markets and festivals in colder seasons.

The Rösti from Swiss cuisine differs in so far as it never contains egg or flour.

A form of potato pancake known as 'Boxty' is a popular traditional dish in most of Ireland. It is made in a similar way but using more starch.

The Swedish version of unbound potato pancakes is called rårakor.[4] When prepared with a batter of wheat flour, milk, egg, and shredded potatoes and fried like thin pancakes, they are called raggmunk, which literally translates as "hairy doughnuts" (the grated potatoes make them look hairy).[5] Both kinds are enjoyed with fried bacon and lingonberry jam.

Latkes are traditionally eaten by Jews during the Jewish Hanukkah festival. The oil for cooking the latkes is reminiscent of the oil from the Hanukkah story that kept the Second Temple of ancient Israel lit with a long-lasting flame that is celebrated as a miracle.[6] Despite the popularity of latkes and tradition of eating them during Hanukkah, they are hard to come by in stores or restaurants in Israel.[7]

The word leviva, the Hebrew name for latke, has its origins in the Book of Samuel's description of the story of Amnon and Tamar.[8] Some interpreters have noted that the homonym levav means "heart," and the verbal form of l-v-v occurs in the Song of Songs as well.

Latkes need not necessarily be made from potatoes. Prior to the introduction of the potato to the Old World, latkes were and in some places still are made from a variety of other vegetables, cheeses, legumes, or starches, depending on the available local ingredients and food ways of the various places where Jews lived.[citation needed]

Potato pancakes, known in Polish as placki ziemniaczane, are often served in Poland topped with meat sauce, pork crisps or goulash, as well as sour cream, apple sauce, mushroom sauce,[9] and cottage or sheep's cheese or even fruit syrup. Their popularity is closely associated with the historic presence of one of the largest Jewish communities in the world flourishing in Poland. In the 19th century,[10] especially in times of economic difficulty during the foreign partitions, potato pancakes often replaced missing bread among the peasants. The lower quality crops given to field laborers were sometimes turned by them quickly into pancakes to improve taste and prolong freshness.[11]