The Space Shuttle Enterprise (NASA Orbiter Vehicle Designation: OV-101) was the first Space Shuttle orbiter. It was built for NASA as part of the Space Shuttle program to perform test flights in the atmosphere.[2] It was constructed without engines or a functional heat shield, and was therefore not capable of spaceflight. On September 17, 1976 the first full scale prototype was completed.[3]

Originally, Enterprise had been intended to be refitted for orbital flight, which would have made it the second space shuttle to fly after Columbia.[2] However, during the construction of Columbia, details of the final design changed, particularly with regard to the weight of the fuselage and wings. Refitting Enterprise for spaceflight would have involved dismantling the orbiter and returning the sections to subcontractors across the country. As this was an expensive proposition, it was determined to be less costly to build Challenger around a body frame (STA-099) that had been created as a test article.[2] Similarly, Enterprise was considered for refit to replace Challenger after the latter was destroyed, but Endeavour was built from structural spares instead.[2][4]

Construction began on Enterprise on June 4, 1974.[2] Designated OV-101, it was originally planned to be named Constitution and unveiled on Constitution Day, September 17, 1976. A write-in campaign by Trekkies to President Gerald Ford asked that the orbiter be named after the Starship Enterprise, featured on the television show Star Trek. Although Ford did not mention the campaign, the president—who during World War II had served on the aircraft carrier USS Monterey (CVL-26) that served with USS Enterprise (CV-6)—said that he was "partial to the name" and overrode NASA officials.[4][5]

The design of OV-101 was not the same as that planned for OV-102, the first flight model; the tail was constructed differently, and it did not have the interfaces to mount OMS pods. A large number of subsystems—ranging from main engines to radar equipment—were not installed on this vehicle, but the capacity to add them in the future was retained. Instead of a thermal protection system, its surface was primarily covered with simulated tiles made from polyurethane foam. Fiberglass was used for the leading edge panels in place of the reinforced carbon-carbon ones of spaceflight worthy orbiters. Only a few sample thermal tiles and some nomex blankets were real. [6]

In mid-1976, the orbiter was used for ground vibration tests, allowing engineers to compare data from an actual flight vehicle with theoretical models.[2]

On September 17, 1976, Enterprise was rolled out of Rockwell's plant at Palmdale, California. In recognition of its fictional namesake, Star Trek creator Gene Roddenberry and most of the principal cast of the original series of Star Trek were on hand at the dedication ceremony.[7] 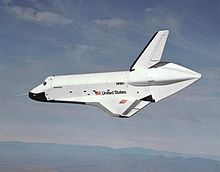 Enterprise as it banks on its second Approach and Landing Test, September 13, 1977.

On January 31, 1977, it was taken by road to Dryden Flight Research Center at Edwards Air Force Base, to begin operational testing.[2][8]

While at NASA Dryden, Enterprise was used by NASA for a variety of ground and flight tests intended to validate aspects of the shuttle program.[9] The initial nine-month testing period was referred to by the acronym ALT, for "Approach and Landing Test".[2][10] These tests included a maiden "flight" on February 18, 1977 atop a Boeing 747 Shuttle Carrier Aircraft (SCA) to measure structural loads and ground handling and braking characteristics of the mated system. Ground tests of all orbiter subsystems were carried out to verify functionality prior to atmospheric flight.

Enterprise underwent five free flights where the craft separated from the SCA and was landed under astronaut control. These tests verified the flight characteristics of the orbiter design and were carried out under several aerodynamic and weight configurations.[10] On the fifth and final glider flight, pilot-induced oscillation problems were revealed, which had to be addressed before the first orbital launch occurred.[9] 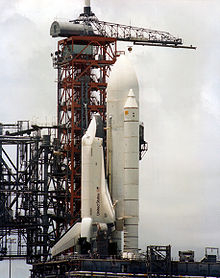 Enterprise visited pad 39-A in launch configuration 20 months before the first Shuttle launch.[12]

Following the ALT program, Enterprise was ferried among several NASA facilities to configure the craft for vibration testing. In June 1979, it was mated with an external tank and solid rocket boosters (known as a boilerplate configuration) and tested in a launch configuration at Kennedy Space Center Launch Pad 39A.[4]

With the completion of critical testing, Enterprise was partially disassembled to allow certain components to be reused in other shuttles, then underwent an international tour visiting France, Germany, Italy, the United Kingdom, Canada, and the U.S. states of California, Alabama, and Louisiana (during the 1984 Louisiana World Exposition). It was also used to fit-check the never-used shuttle launch pad at Vandenberg AFB, California. Finally, on November 18, 1985, Enterprise was ferried to Washington, D.C., where it became property of the Smithsonian Institution.[4]

After the Challenger disaster, NASA considered using Enterprise as a replacement. Refitting the shuttle with all of the necessary equipment for it to be used in space was considered, but NASA decided to use spares constructed at the same time as Discovery and Atlantis to build Endeavour.[4]

In 2003, after the breakup of Columbia during re-entry, the Columbia Accident Investigation Board conducted tests at Southwest Research Institute, which used an air gun to shoot foam blocks of similar size, mass and speed to that which struck Columbia at a test structure which mechanically replicated the orbiter wing leading edge. They removed a fiberglass panel from Enterprise's wing to perform analysis of the material and attached it to the test structure, then shot a foam block at it.[13] While the panel was not broken as a result of the test, the impact was enough to permanently deform a seal. As the reinforced carbon-carbon (RCC) panel on Columbia was 2.5 times weaker, this suggested that the RCC leading edge would have been shattered. Additional tests on the fiberglass were canceled in order not to risk damaging the test apparatus, and a panel from Discovery was tested to determine the effects of the foam on a similarly-aged RCC leading edge. On July 7, 2003, a foam impact test created a hole 41 cm by 42.5 cm (16.1 inches by 16.7 inches) in the protective RCC panel. The tests clearly demonstrated that a foam impact of the type Columbia sustained could seriously breach the protective RCC panels on the wing leading edge.

The board determined that the probable cause of the accident was that the foam impact caused a breach of a reinforced carbon-carbon panel along the leading edge of Columbia's left wing, allowing hot gases generated during re-entry to enter the wing and cause structural collapse. This caused Columbia to spin out of control, breaking up with the loss of the entire crew.

Enterprise on display with IRBMs, ICBMs, and ABM equipment at the Steven F. Udvar-Hazy Center.

Enterprise was stored at the Smithsonian's hangar at Washington Dulles International Airport before it was restored and moved to the newly built Smithsonian's National Air and Space Museum's Steven F. Udvar-Hazy Center at Dulles International Airport, where it has been the centerpiece of the space collection.[1] On April 12, 2011, NASA announced that Space Shuttle Discovery, the most traveled orbiter in the fleet, will be added to the collection once the Shuttle fleet is retired. When that happens, Enterprise will be moved to New York City, but the exact location is still tentative.[14][15][16] In preparation for the anticipated relocation, engineers evaluated the vehicle in early 2010 and determined that it was safe to fly on the Shuttle Carrier Aircraft once again.[17]