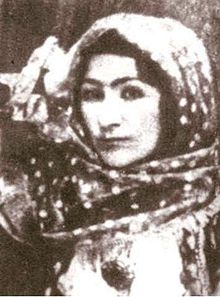 Khurshidbanu Natavan (Azerbaijani: Xurşidbanu Natəvan, Persian: خورشیدبانو ناتوان born 6 August 1832, Shusha – 2 October 1897, Shusha) is considered one of the best lyrical poets of Azerbaijan[1] whose poems are in Persian and Azerbaijani. Daughter of Mehdi Gulu-khan, the last ruler of the Karabakh khanate (1748–1822), Natavan was most notable for her lyrical ghazals. Her name Khurshid Banu (خورشیدبانو) is from Persian and means "Lady Sun". Her nom de plume Natavan (ناتوان) is also from the Persian and means powerless.[2] 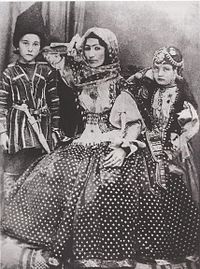 Hurshidbanu Natavan with her children

Natavan was born on August 15, 1830 in Shusha, a town in present-day Nagorno-Karabakh. Being the only child in the family and descending from Panah Ali Khan, she was the only heir of the Karabakh khan, known to general public as the "daughter of the khan" (Azerbaijani: xan qızı).

After her father's death, Natavan was closely engaged in philanthropy, promoting the social and cultural development of Karabakh. Among her famous deeds was a water main that was first laid down in Shusha in 1883, thus solving the water problem of the townsfolk. The local Russian "Kavkaz" newspaper wrote at the time: "...Khurshud Banu-Begum left an eternal mark in the memories of the Shushavians and her glory will pass on from generation to generation".[3] The springs built by Natavan from famous Shusha white stones were called by the townsfolks "Natavan springs" and were also considered historical monuments under protection.

Natavan also founded and sponsored the first literary societies in Shusha and in the whole of Azerbaijan. One of them called Majlis-i Uns ("Society of Friends")[1] became especially popular and concentrated major poetic-intellectual forces of Karabakh of that time.[4]

Humanism, kindness, friendship and love were the main themes of Natavan's poems-ghazels. These sentimental-romantic poems express the feelings and sufferings of a woman who was not happy in her family life and who lost her son. Many of these poems are used in folk songs nowadays.

Natavan died in 1897 in Shusha. When she departed people, as a sign of respect, carried her coffin on their shoulders all the way from Shusha to Agdam, some 30 km north-east, where she was buried in a family vault.

Her sons Mehdi Qoli Khan and Mir Hasan both have collection of poems in Persian.

Fate of Natavan's monuments in Shusha 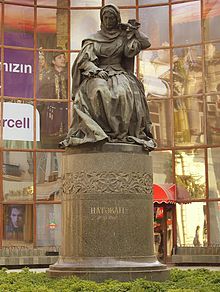 During the Nagorno-Karabakh War in 1992, Natavan's residence in Shusha, similar to other historical monuments in the conflict zone, was damaged.

The monuments to Natavan [5][6] and to other famous Karabakh Azeris including Hajibekov and Bulbul in Shusha were severely damaged. These monuments, which once decorated the central streets of Shusha were dismantled by Armenian militants and intended to be sold as a scrap metal in Georgia. Polad Bulbuloghlu, then the Minister of Culture of Azerbaijan rescued the bronze busts and transported them to Baku.[7]

"I saw the three bronze heads, forlorn and pocked with bullets, lying in the courtyard of the headquarters of the Red Cross in the center of Baku: the poet Natevan, an earnest girl in a head scarf reading a book, missing a thumb; the composer Hajibekov, a bullet-ridden gentleman in double-breasted suit and broken spectacles; and Bul Bul, a famous singer with a serious domed bronze forehead"[8]

Nowadays these monuments are kept in the yard of the Azerbaijani Museum of Arts in Baku. Pocked by bullet holes, they stand as another mute witness to the casualties that have resulted in the war over Nagorno-Karabakh.[9][1]