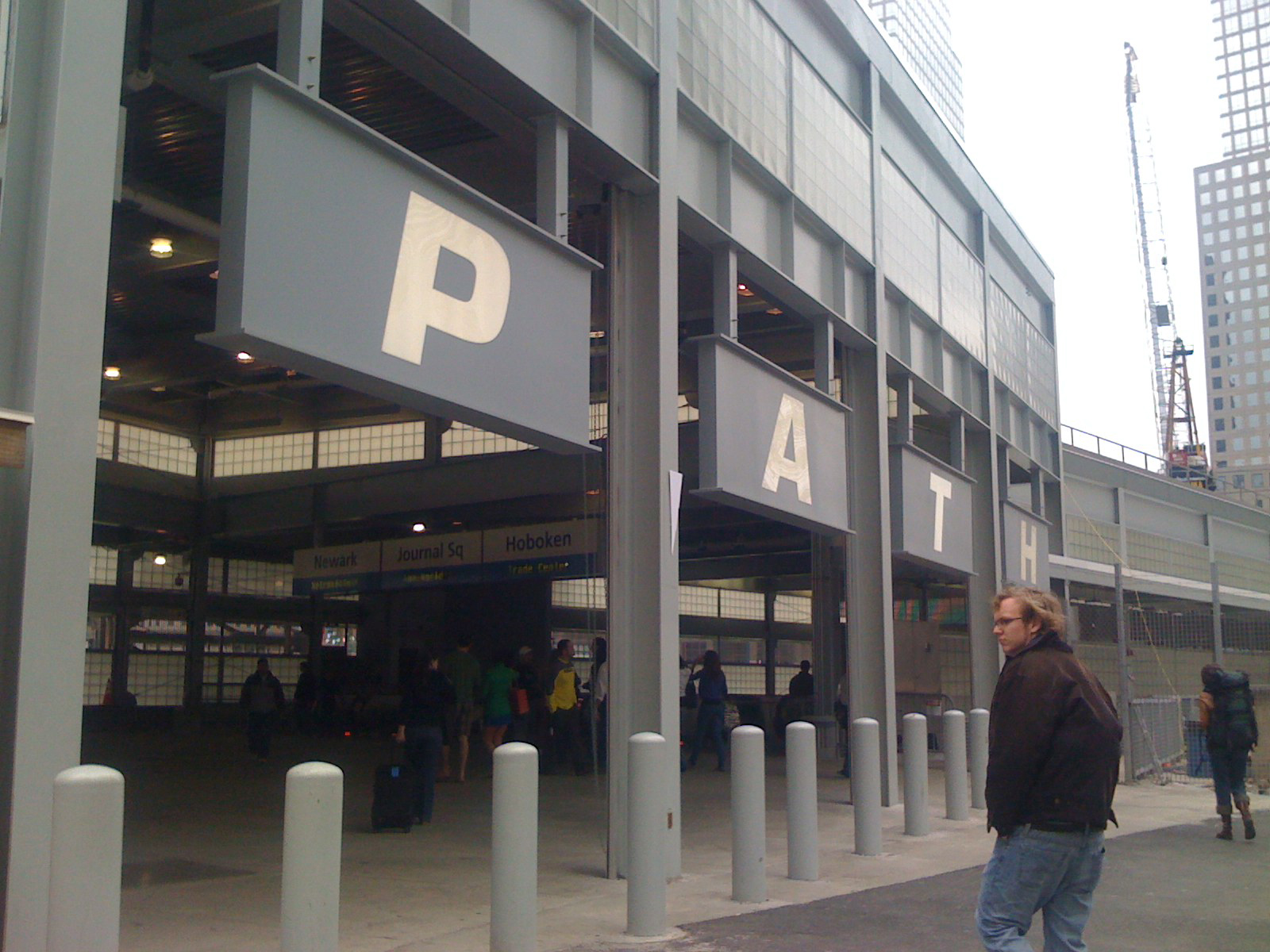 image_size=
image_caption=New PATH station entrance that opened in April 2008
address=World Trade Center
New York, NY
line=rail color box|system=PATH|line=NWK-WTCrail color box|system=PATH|line=HOB-WTC
other=: NYCS Eighth south, NYCS Broadway-Seventh Brooklyn
New York City Bus: M1, M6
platform=1 , 2 s
tracks=5
bicycle=
passengers=12.1 million
pass_year=2006
pass_percent=9
opened=1903
rebuilt=1971, 2003
ADA=yes
owned=
services=s-rail|title=PATH
The World Trade Center PATH station originally opened on , as the Hudson Terminal. When the Hudson Terminal was torn down to make way for the , a new station was built, which opened in 1971. This station served as the terminus for the Newark-World Trade Center and Hoboken-World Trade Center routes until it was destroyed during the . A temporary station was built, which opened on , .

Hudson Terminal was built by the Hudson and Manhattan Railroad at the turn of the twentieth century and was located between Greenwich, Cortlandt, Church, and Fulton Streets. The Hudson Terminal included two 22-story buildings were located above the station, at 30 and 50 Church Street. The terminal was an architectural and engineering marvel of its time, carefully planned and designed with a series of ramps descending from the street level to the mezzanine, to allow pedestrian traffic to flow in and out of the station quickly and easily.

Overall ridership on New Jersey's (H&M) declined substantially from a high of 113 million riders in 1927 to 26 million in 1958, after new automobile tunnels and bridges opened across the . [cite book |title=Rails Under the Mighty Hudson |author=Cudahy, Brian J. |publisher=Fordham University Press |year=2002 |pages=p. 56] The State of New Jersey was interested in getting the Port Authority to take over the railroad, but the Port Authority long viewed it as something unprofitable that they were never interested in. In the late 1950s, the Port Authority proposed to build a "world trade center" in New York City, on the east side of Lower Manhattan along the .

As a bi-state agency, Port Authority projects require approval from both the states of and . Toward the end of 1961, negotiations with outgoing New Jersey Governor regarding the World Trade Center project reached a stalemate. In December 1961, Port Authority executive director met with newly elected New Jersey Governor , and made a proposal to shift the World Trade Center project to a west side site where the was located.

The new PATH station opened on , , and was sited at a different location from the original Hudson Terminal. [cite news |title=New PATH Station Opens Downtown |author=Burks, Edward C. |date=July 7, 1971 |publisher=The New York Times] The PATH station platform was slightly longer than its predecessor, accommodating 10-car trains versus the 6-car trains that the Hudson Terminal could handle. The tight turns in the loop into the Hudson Terminal were made less tight in the new station. While neared completion, a temporary corridor was provided to take passengers between the station and a temporary entrance on Church Street. When it opened, the station had nine high-speed escalators between the platform level and the mezzanine level. The WTC PATH station was served by Newark-World Trade Center and Hoboken-World Trade Center trains.

The PATH station was connected to the World Trade Center towers, via an underground concourse and shopping center. There were also underground connections to the NYCS service|A/NYCS service|C/NYCS service|E lines and to the NYCS service|N and NYCS service|R lines. Prior to September 11, the mall had been leased to , which intended to rename the mall Westfield Shoppingtown World Trade Center, and embark on a major expansion and renovation program. Plans called for the addition of 200,000 square feet of new mall space and a few well-known sit-down restaurants. By 2001, the volume of passengers using the WTC PATH station was approximately 25,000 daily. [cite news |title=Next Stop, Semi-Normalcy |publisher=The Star-Ledger (Newark) |date=September 13, 2001 |author=Wyckoff, P.L. and Rudy Larini]

Soon after Flight 11 (first plane) hit the North Tower on 9/11, the PATH station was shut down by order from PATH's deputy director, Victoria Cross Kelly, and Richie Moran who commanded the PATH system at the . A train from Newark that came into the terminal at 8:55 a.m. stopped only to pick up passengers. A second train, from Hoboken, came through at 9:00 a.m. but did not stop and returned to New Jersey. PATH sent an empty train to the station at 9:10 a.m. to pick up a dozen PATH employees, as well as a homeless individual, leaving the PATH station empty. [cite news |title=Quick-Acting P.A. Steered 5,000 Commuters to Safety |publisher=The Star-Ledger (Newark) |date=September 19, 2001 |author=Schwaneberg, Robert]

With the station destroyed, service to Lower Manhattan was suspended for over two years. Exchange Place, the next station on the Newark–World Trade Center line, also had to be closed because it could not operate as a "terminal" station. Instead, two uptown services (Newark–33rd Street (red) and Hoboken–33rd Street (blue)) and one intra-state New Jersey service (Hoboken-Journal Square (green)) were put into operation.

In the 9/11 attacks, some sections of the station including the floor and the signage on the northeast corner, were only lightly damaged in the . These sections of the station were retained in the temporary PATH station, and will remain in the new station, where it connects with the NYCS service|A/NYCS service|C platforms. Following its reopening and the resumption of Newark-World Trade Center and Hoboken-World Trade Center service, the station quickly reclaimed its status as the busiest station in the PATH system.

The World Trade Center PATH station was also home to a booth which opened in 2005. Through this program, visitors could arrange to give oral recorded histories of the disaster. The booth closed in Spring 2007 to make way for construction at the . [cite web |url=http://www.wtc.com/about/at-the-world-trade-center |title=About the World Trade Center |publisher=Silverstein Properties |accessdate=2008-04-20] In June 2007, the street entrance to the temporary station was closed and demolished as part of the ongoing site construction. A set of new staircases was constructed several feet to the south, and a "tent" structure was added to provide cover from the elements. The tent structure, by Voorsanger Architects and installed at a cost of $275,000, was designed to have an "aspiring quality" according to architect Bartholomew Voorsanger. [cite news |url=http://cityroom.blogs.nytimes.com/2008/04/10/folding-a-large-and-symbolic-tent-downtown/ |title=Folding a Large and Symbolic Tent Downtown |author=Dunlap, David W. |publisher=The New York Times |date=April 10, 2008] That entrance on Church Street was closed in April 2008 when the entrance was relocated once again. On , , the third new temporary entrance to the PATH station opened for commuters. The entrance is located on Vesey Street, adjacent to . It will serve as the entrance through at least 2011.

The Fulton&ndash;Broadway&ndash;Nassau station complex is one block away. An underground passageway along Dey Street is being constructed as part of the Fulton Street Transit Center project. Currently, there is street-level connection to the following services:

Plans for the new station

A large transit station was not part of the 2003 master plan for the site by , which called for a smaller station along the lines of the original subterranean station that existed beneath the World Trade Center. Libeskind's design called for the space to be left open, forming a "Wedge of Light" so that sun rays around the autumnal would hit the World Trade Center footprints each September.

In early 2004, the Port Authority, which owns the land, modified the Libeskind plan to include a world-class transportation station downtown that was intended to rival Penn Station and . In a nod to the Liebeskind concept, the station will be at an angle to maximize the effect of the autumnal equinox rays.

has never had an ambitious transit or railroad center, as the former complex at the World Trade Center was built beneath the buildings. The station is designed to connect the PATH to the New York City Subway system. A proposal for a connection to the via a new tunnel under the , the , is currently in the alternatives analysis stage.

Spanish Architect , designer of the station, said it resembles a bird being released from a child's hand. The roof was originally designed to mechanically open to increase light and ventilation to the enclosed space. Herbert Muschamp, architecture critic of "The New York Times", wrote:

:Santiago Calatrava's design for the World Trade Center PATH station should satisfy those who believe that buildings planned for ground zero must aspire to a spiritual dimension. Over the years, many people have discerned a metaphysical element in Mr. Calatrava's work. I hope New Yorkers will detect its presence, too. With deep appreciation, I congratulate the Port Authority for commissioning Mr. Calatrava, the great Spanish architect and engineer, to design a building with the power to shape the future of New York. It is a pleasure to report, for once, that public officials are not overstating the case when they describe a design as breathtaking.

:The World Trade Center PATH Terminal by Santiago Calatrava, the renowned Spanish architect and engineer, is what we should have at ground zero. Not modified suburban malls with water fountains, but a major cultural contribution to our city.

However, Calatrava's original soaring spike design has been scaled back because of security issues. The "Times" observed, "In the name of security, Santiago Calatrava's bird has grown a beak. Its ribs have doubled in number and its wings have lost their interstices of glass.... [T] he main transit hall, between Church and Greenwich Streets, will almost certainly lose some of its delicate quality, while gaining structural expressiveness. It may now evoke a slender more than it does a bird."

The design was further modified to eliminate the opening and closing roof mechanism because of budget and space constraints.

The station has also stirred problems with developer , who owns the lease for the World Trade Center site, since it took away available space for his proposed buildings.

Construction of the station calls for relocation of the landmark in 2006. The permanent station is scheduled to be completed in 2013.

On , , the first prefabricated "ribs" for the pedestrian walkway under Fulton Street were installed on the site.