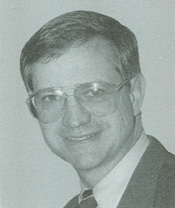 Francis Xavier "Frank" McCloskey (, – , ) was a Democratic representative from from , to , . He was born in and later moved to after receiving an undergraduate and J.D. degree from .

McCloskey was elected mayor of Bloomington in 1971 and served until his election to Congress in 1982. While mayor, he was credited with helping obtain federal funds to help improve city services and revitalize the city's downtown area. He was re-elected mayor in 1975 and 1979.

Initially, Mayor McCloskey was an underdog in his race against two-term incumbent Republican representative Joel Deckard in 's 8th Congressional District. McCloskey emerged the victor on election night, however, after Deckard was involved in a drunk driving accident shortly before the election. The final tally was 99,978 (52%) for McCloskey to 93,671 (48%) for Deckard. McCloskey thus became the sixth challenger since to unseat an incumbent in what had become known as "the Bloody Eighth."

In the 1984 election, McCloskey faced conservative state representative Rick McIntyre. Buoyed by President Reagan's strong coattails, McIntyre trailed McCloskey by only 72 votes after the initial vote count. A tabulation error, however, resulted in an undercounting of McCloskey votes.

Indiana's Secretary of State (a Republican) certified McIntyre as the winner by 34 votes, ignoring other recounted tallies that actually showed McCloskey was in the lead. The Democratic-controlled House refused to seat either McIntyre or McCloskey and conducted their own recount. In the end, the House seated McCloskey after declaring him the winner by just four votes (116,645 to 116,641). The vote was largely along partisan lines and in response every Republican House member marched out of the chamber in protest.

McIntyre sought a rematch in 1986, but by then, emotions over the bitter recount had faded, and without Reagan's coattails, McCloskey won by a comfortable margin, 106,662 (53%) to 93,586 (46.5%). McCloskey was re-elected with 62% of the vote in 1988, 55% in 1990, and 53% in 1992, the first election in which his hometown of Bloomington was completely within the boundaries of the 8th District. McCloskey's lower 1992 margin, coming at the same time that became the first Democratic presidential candidate to win the 8th District since 1964 and then-Governor carried all of the district's counties in his re-election bid, was partly attributed to McCloskey's 65 overdrafts at the House bank. McCloskey's efforts to save jobs at the district's Crane Naval Surface Weapons Warfare Center helped secure his re-election.

McCloskey was one of thirty-four Democratic incumbents defeated during the 1994 . McCloskey lost to Republican 48% to 52%.

Efforts to bring peace to the Balkans

During his tenure in Congress, McCloskey made many trips to Bosnia and was one of the first to call for air strikes against Bosnian Serb forces. During his last year in Congress, he sponsored, and led efforts for passage of, legislation lifting the United States arms embargo against Bosnia. He spent his post-Congressional years working to bring peace and stability to Bosnia and the .