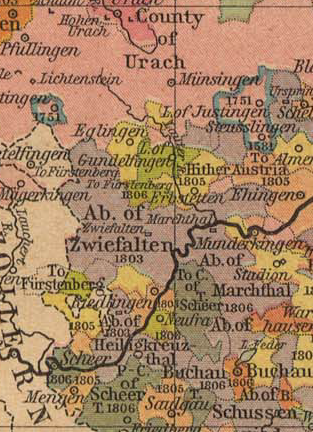 The monastery was founded in at the time of the by Counts Gero and Kuno of Achalm, advised by Bishop and Abbot . The first monks were also from , home of the (under the influence of the Cluniac reforms), which strongly influenced the new foundation.

Although granted special privileges to it, Zwiefalten Abbey was nevertheless the private monastery of the Counts of Achalm, later succeeded by the Counts of Württemberg.

The abbey was plundered in 1525 during the .

In 1750 the abbey was granted the status of "", which meant that it had the status of an independent power subject only to the Imperial Crown and was free of the rule of Württemberg.

On , however, it was secularised and dissolved and became a lunatic asylum and later psychiatric hospital, which it is today, as well as the site of the Württemberg Psychiatry Museum.