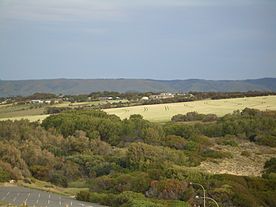 Maslin Beach is a southern coastal suburb of Adelaide, South Australia. It is located in the City of Onkaparinga.

The name refers to the town of Maslin Beach, the beach after which it was named and the suburb which contains both. In this article, the name shall be taken to refer to the suburb, unless stated otherwise.

Local newspapers include The Times and On The Coast.[7]

The most well-known attraction in the suburb is the beach of Maslin Beach. Also known as Maslin's Beach or, simply, Maslin's, the beach is the site of a cliff-lined recreation reserve stretching from Maslin Beach town in the north to Blanche Point in the south.

In 1975, the southern half of the beach was declared Australia's first official nude beach.[citation needed] The beach is almost 3 kilometres (1.9 mi) long, so the area reserved for nude bathing is away from other beach users.

The Maslin Beach Nude Olympics are held annually, consisting of informal competitions such as three-legged races and the judging of "best bum".[8]

As well as the beach, there is also a park located between Old Coach Road and Gulf Parade.[6]

Maslin Beach is serviced by Main South Road, connecting the suburb to both Adelaide city centre and the southern Fleurieu Peninsula.[6]

Maslin Beach is serviced by public transport run by the Adelaide Metro.[9]