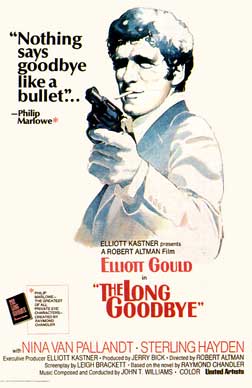 "The Long Goodbye" (1973) is a film adaptation of 's novel "The Long Goodbye." Directed by from a screenplay by , the film stars as , veteran as Roger Wade and director as the gangster Marty Augustine. "The Long Goodbye" holds up a mirror to the culture of the Hollywood lifestyle in the 1970s. The film is "a study of a moral and decent man cast adrift in a selfish, self-obsessed society where lives can be thrown away without a backward glance...and any notions of friendship and loyalty are meaningless" [O'Brien, Daniel. "Robert Altman: Hollywood Survivor."]

was also one of the screenwriters on the 1946 film "The Big Sleep," also based on a Chandler novel.

While trying in vain to feed his cat late one night, private investigator Philip Marlowe (Gould) receives a visit from his friend, Terry Lennox (Bouton). Lennox asks Marlowe to drive him to . When he returns home, the police are waiting for him and claim that Lennox brutally murdered his wife. Marlowe does not believe that his good friend is a murderer and refuses to tell the police anything. After three days in jail, he's released when the police inform him that Lennox committed suicide in Mexico. It's an open and shut case but something doesn't quite sit right with Marlowe.

He is subsequently hired by the wealthy Eileen Wade (Pallandt) to find her alcoholic husband, Roger Wade (Hayden), a famous author with a Hemingway complex. Marlowe learns that the Wades knew the Lennoxes and that there is more to Terry's suicide and his wife's murder than initially reported.

Producers Jerry Bick and Elliott Kastner had acquired the rights to the novel and made a deal with United Artists. They commissioned Leigh Brackett to write the screenplay and approached and to direct.

Both filmmakers turned the producers down but Bogdanovich recommended Altman who, initially, wasn't interested until they let him cast Elliott Gould to play Marlowe. Originally, the producers had wanted either or to play Marlowe. At the time, the actor had fallen out of favor after several unsuccessful films, including "A Glimpse of Tiger" where he had bickered with co-star , exchanged blows with director and displayed erratic behaviour.

He hadn't worked for two years as a result. However, Altman had faith in Gould and convinced Bick that he was perfect for the role. The studio not only made Gould do the requisite physical before approving his contract but they also demanded he undergo a to prove that he was stable enough to make the movie.

Altman based his research for the film's screenplay not on the novel but on "Raymond Chandler Speaking", a collection of letters. The director then had everyone who worked on the production read them as well. In an article entitled, "Robert Altman: American Innovator," he said of the collection of letters, "But he [Chandler] used this thread to hang about sixty thumbnail essays on, so the real interest in Raymond Chandler, to me, were those essays. We tightened the plot up; I dropped half the characters, probably; then I used that line to hang a bunch of film essays on." The most significant change that he and Brackett made was with the ending. She remembered, "The original ending, the one in the novel, was pretty inconclusive and didn't please any of us, so we thought we'd go for broke and see what happened."

The actual plot deviates drastically from 's novel "The Long Goodbye". Leigh Brackett took a few liberties when adapting the book into a screenplay. Marlowe's killing his best friend Terry Lennox at the end of the film -- which was taken from -- was a major departure from the book. The role of Sylvia Lennox's rich father was eliminated from the storyline for the film. Roger Wade's suicide was originally a murder in the novel. Marty Augustine is not in the novel, and his role and subplots were added specifically for the film.

The film pokes fun at Hollywood stereotypes, opening and closing with the original version of "" &mdash; in the opening shot old art of the is shown, and the camera pans to Marlowe, now in the 1970s. Marlowe ("Rip Van Marlowe"), is a relic of the 1940s transplanted to the 1970s. Marlowe himself refers to the artifice when talking to the cops: "Is this where I'm supposed to say 'What's all this about?' and he says 'Shut up, I ask the questions'?"

The film is often washed out, with weak colors. Altman and his cinematographer, , intentionally partially exposed the negatives. Many shots were through windows or (in at least one scene) a cage, often reflected in windows.

Originally , who played the character of Hoss in "" and was a close friend of director , was chosen to play the character of Roger Wade, but he died before filming began. The film is dedicated to Dan Blocker.

Elliott Gould lights a cigarette in every single scene he appears in in the movie. He is also the only character who smokes.

* as
* as Eileen Wade
* as Roger Wade
* as Marty Augustine
* as Dr. Verringer
* as Harry
* as Terry Lennox
* , in one of his earliest roles, appears briefly as one of Augustine's thugs.

Initial reviews for the film were mixed and the box-office returns were poor, on account of the unconventional changes from the novel. "Sight and Sound" and "The Film Quarterly" attacked the depiction of Marlowe stating that "one can not satirize or destroy a hero image until one defines it" (Gerald Plecki, "Robert Altman"). Some critics objected to a 1970's Marlowe characterized differently by an ending changed from the book. Altman liked the new ending so much that he insisted on a clause in his contract that guaranteed the ending wouldn't be changed during production or editing. The act of cold violence and Gould's sloppy, boyish Marlowe was a clear attempt to distance the movie from Bogart's "The Big Sleep". Other reviewers compared the film favorably to other Altman films. A "" review of the film, by critic in 1973, noted "Don't be misled by the ads, "The Long Goodbye" is not a put-on. It's great fun and it's funny, but it's a serious, unique work." [ [http://movies2.nytimes.com/mem/movies/review.html?title1=&title2=THE+LONG+GOODBYE+%28MOVIE%29&reviewer=Vincent+Canby&v_id=29924&pdate= Canby, Vincent] . "The New York Times," film review, , 1973. Last accessed: , .]

After early critical reaction to the film was so bad, United Artists pulled it from distribution, analyzing the scathing reviews for six months. They came to the conclusion that the ad campaign had been misleading. The studio had promoted Altman's film as a detective story with an emphasis on the names "Raymond Chandler" and "Philip Marlowe." The director decided that a new ad campaign "had to prepare audiences for a movie that satirizes Hollywood and the entire Chandler genre. So I went to "Mad" magazine and asked Jack Davis, the artist, to come up with a cartoon approach." [Gardner, Paul. "The New York Times," "Long Goodbye" Proves A Big Sleeper Here," , .]

United Artists spent $40,000 on a new campaign for the film's New York City premiere (where it did quite well) and for the rest of the country (where it continued to do poorly). "The New York Times" put Altman's film on their Ten Best List of the year and Vilmos Zsigmond won the ' award as Best Cinematographer.

With time "The Long Goodbye" was more widely accepted, regarded by one critic as "the Altman master work" (Gerald Plecki, "Robert Altman").

The soundtrack of the film consists of two songs, the aforementioned "Hooray for Hollywood" and a song titled "The Long Goodbye," composed by and . Each time the song is used it is played in a very different arrangement and instrumentation, from hippie chant to store , making it at times almost unrecognizable. The score has been released on by "" on the same disc as Williams's "".