Derek Morris (born August 24, 1978) is a Canadian professional ice hockey defenceman, currently a member of the Phoenix Coyotes of the National Hockey League. Drafted out of the Western Hockey League (WHL) 13th overall by the Calgary Flames in the 1996 NHL Entry Draft, he has also played in the NHL for the Colorado Avalanche, Boston Bruins and the New York Rangers.

Morris played minor hockey in the Alberta Midget Hockey League (AMHL) with the Red Deer Chiefs and was awarded the Brian Benning Trophy as the league's top defenceman in 1995.[1] He went on to play major junior with the Regina Pats of the Western Hockey League (WHL). After his rookie WHL season, in which he scored 52 points in 67 games, Morris was drafted 13th overall by the Calgary Flames in the 1996 NHL Entry Draft. He returned to play a second season with the Pats, improving to 18 goals and 75 points before turning pro.

Following Morris's 1996–97 WHL season with the Pats, he was assigned to the Calgary's American Hockey League (AHL) affiliate, the Saint John Flames for the final 7 games of the regular season, as well as 5 post-season games. In 1997–98, he scored 9 goals and 29 points in his NHL rookie season with the Flames, earning NHL All-Rookie Team honours. He continued to improve to 34, then 38 points in his second and third seasons with the Flames before an injury-shortened season in 2000–01 kept him to 28 points in 51 games. 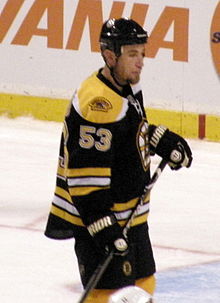 Morris with the Bruins.

In 2001–02, Morris was again sidelined after sustaining a left wrist injury. During the season, he was involved in a tragic incident in a game against the Columbus Blue Jackets on March 16, 2002, when an Espen Knutsen slap shot deflected off him and into the stands, striking 13-year old Brittanie Cecil in the temple. She died from the impact two days later,[2] prompting the NHL to implement protective netting at the ends of the rinks at the start of the following season.

Morris completed the season with 34 points in 61 games.

After five seasons with Calgary, reaching the 30-point mark four times, he was traded to the Colorado Avalanche.[3] Morris made an immediate impact with the Avalanche in his first season, tallying a career-high 11 goals, 37 assists and 48 points in 2002–03.

The following season, however, he was traded for the second time in as many campaigns, this time to the Phoenix Coyotes. Morris was set to become a free agent in the subsequent off-season.[4] Morris completed the 2003–04 season playing in 14 games and recording 2 assists with the Coyotes after being traded. He finished with a combined 32 points. In his first full season with the Coyotes in 2005–06, Morris tallied 28 points in 53 games, then recorded back-to-back 25-point seasons the following two campaigns.

He did not re-sign with the Rangers in the off-season, instead on July 24, 2009, Morris signed a one-year contract with the Boston Bruins worth $3.3 million.[6]

On March 3, 2010 he was traded to the Phoenix Coyotes for a conditional fourth round pick in the 2011 NHL Entry Draft.[7]

Morris has represented Team Canada on three occasions at the World Championships. After appearances in 1999 and 2001, he won his first gold medal with Canada at the 2004 World Championships in the Czech Republic. He contributed 5 assists in the gold-medal effort.