Salicylic acid (from Latin salix, willow tree, from the bark of which the substance used to be obtained) is a monohydroxybenzoic acid, a type of phenolic acid and a beta hydroxy acid. This colorless crystalline organic acid is widely used in organic synthesis and functions as a plant hormone. It is derived from the metabolism of salicin. In addition to being a compound that is chemically similar to but not identical to the active component of aspirin (acetylsalicylic acid), it is probably best known for its use in anti-acne treatments. The salts and esters of salicylic acid are known as salicylates.

Salicylic acid has the formula C6H4(OH)COOH, where the OH group is ortho to the carboxyl group. It is also known as 2-hydroxybenzenecarboxylic acid. It is poorly soluble in water (0.2 g/100 ml H2O at 20 °C).[2] Aspirin (acetylsalicylic acid or ASA) can be prepared by the esterification of the phenolic hydroxyl group of salicylic acid with the acetate ion from acetic anhydride or acetic chloride.

Salicylic acid (SA) is a phenolic phytohormone and is found in plants with roles in plant growth and development, photosynthesis, transpiration, ion uptake and transport. SA also induces specific changes in leaf anatomy and chloroplast structure. SA is involved in endogenous signaling, mediating in plant defense against pathogens.[3] It plays a role in the resistance to pathogens by inducing the production of pathogenesis-related proteins.[4] It is involved in the systemic acquired resistance (SAR) in which a pathogenic attack on one part of the plant induces resistance in other parts. The signal can also move to nearby plants by salicyclic acid being converted to the volatile ester, methyl salicylate.[5]

Sodium salicylate is commercially prepared by treating sodium phenolate (the sodium salt of phenol) with carbon dioxide at high pressure (100 atm) and high temperature (390K) -a method known as the Kolbe-Schmitt reaction. Acidification of the product with sulfuric acid gives salicylic acid:

It can also be prepared by the hydrolysis of Aspirin (acetylsalicylic acid)[6] or methyl salicylate (Oil of Wintergreen) with a strong acid or base. 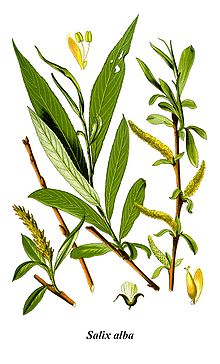 The Greek physician Hippocrates wrote in the 5th century BC about a bitter powder extracted from willow bark that could ease aches and pains and reduce fevers. This remedy was also mentioned in texts from ancient Sumer, Lebanon, and Assyria. The Cherokee and other Native Americans used an infusion of the bark for fever and other medicinal purposes for centuries.[7] The medicinal part of the plant is the inner bark and was used as a pain reliever for a variety of ailments. The Reverend Edward Stone, a vicar from Chipping Norton, Oxfordshire, England, noted in 1763 that the bark of the willow was effective in reducing a fever.[8]

The active extract of the bark, called salicin, after the Latin name for the white willow (Salix alba), was isolated and named by the German chemist Johann Andreas Buchner in 1826. A larger amount of the substance was isolated in 1828 by Henri Leroux, a French pharmacist. Raffaele Piria, an Italian chemist was able to convert the substance into a sugar and a second component, which on oxidation becomes salicylic acid.[9]

Salicylic acid was also isolated from the herb meadowsweet (Filipendula ulmaria, formerly classified as Spiraea ulmaria) by German researchers in 1839. While their extract was somewhat effective, it also caused digestive problems such as gastric irritation, bleeding, diarrhea, and even death when consumed in high doses.

Salicylic acid is known for its ability to ease aches and pains and reduce fevers. These medicinal properties, particularly fever relief, have been known since ancient times, and it was used as an anti-inflammatory drug.[10] Some researchers[who?] believe that salicylate is an essential micronutrient in the human diet, potentially qualifying as a vitamin, namely Vitamin S.[11]

In modern medicine, salicylic acid and its derivatives are used as constituents of some rubefacient products. For example, methyl salicylate is used as a liniment to soothe joint and muscle pain, and choline salicylate is used topically to relieve the pain of aphthous ulcers. 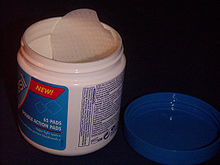 As with other beta hydroxy acids, salicylic acid is a key ingredient in many skin-care products for the treatment of acne, psoriasis, calluses, corns, keratosis pilaris, and warts.[12] It works as a keratolytic, bacteriocide and comedolytic agent by causing the cells of the epidermis to shed more readily, opening clogged pores and neutralizing bacteria within, preventing pores from clogging up again by constricting pore diameter, and allowing room for new cell growth.[13] Because of its effect on skin cells, salicylic acid is used in several shampoos used to treat dandruff. Use of concentrated solutions of salicylic acid may cause hyperpigmentation on unpretreated skin for those with darker skin types (Fitzpatrick phototypes IV, V, VI), as well as with the lack of use of a broad spectrum sunblock.[14][15]

Bismuth subsalicylate, a salt of bismuth and salicyclic acid, is the active ingredient in stomach relief aids such as Pepto-Bismol. Bismuth subsalicylate helps control nausea, heartburn, indigestion, upset stomach, and diarrhea.[citation needed] It is also a very mild antibiotic.

Topically, as a beta-hydroxy acid (and unlike alpha-hydroxy acids) salicylic acid is capable of penetrating and breaking-down fats and lipids, making it capable of causing moderate chemical burns of the skin if at very high concentrations (such as near or actually the majority ingredient) within a solvent. It is capable of damaging the lining of pores in such cases if the solvent is alcohol, acetone, or an oil. Over-the-counter limits are set at 2% for topical left on the face and 3% for those expected to be washed off, such as acne cleansers or shampoo. Caution should be exercised when handling large volumes of salicylic acid, and protective gloves are recommended for any repeat, prolonged exposure. 17% salicylic acid, which is often sold for wart removal, should not be applied to the face and should not be used for acne treatment. Even for wart removal, such a solution should only be applied twice a day - more frequent use may lead to an increase in side effects without an increase in efficacy.[18]

Salicylic acid overdose can lead to salicylate intoxication, which often presents clinically in a state of metabolic acidosis with compensatory respiratory alkalosis. In patients presenting with an acute overdose, a 16% morbidity rate and a 1% mortality rate are observed.[22]

Some people are hypersensitive to salicylic acid and related compounds.

The United States Food and Drug Administration recommends the use of sun protection when using skincare products containing salicylic acid (or any other BHA) on sun-exposed skin areas.[23]

There is data that supports an association between exposure to salicylic acid and Reye's Syndrome. The National Reye's Syndrome Foundation cautions against the usage of these substances, and other substances similar to aspirin, on children and adolescents.

Epidemiological research has shown an association between the development of Reye's Syndrome and the use of aspirin (a salicylate compound) for treating the symptoms of influenza-like illnesses, chicken pox, colds, etc.

The U.S. Surgeon General, the Food and Drug Administration, the Centers for Disease Control and Prevention, and the American Academy of Pediatrics recommend that aspirin and combination products containing aspirin not be given to children under 19 years of age during episodes of fever-causing illnesses.[24]