Hygrometer
Not to be confused with hydrometer.

A hygrometer (UK: /haɪˈɡrɒmɪtə/) is an instrument used for measuring the moisture content in the environmental air, or humidity. Most measurement devices usually rely on measurements of some other quantity such as temperature, pressure, mass or a mechanical or electrical change in a substance as moisture is absorbed. From calculations based on physical principles, or especially by calibration with a reference standard, these measured quantities can lead to a measurement of humidity. Modern electronic devices use temperature of condensation, or changes in electrical capacitance or resistance to measure humidity changes. 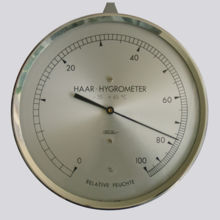 A dial hygrometer, in this case a hair tension style. Note nonlinear scale.

The familiar metal/paper coil hygrometer is useful for giving a dial indication of humidity changes, but it appears most often in very inexpensive devices and their accuracy is very limited. A search through many identical units in a display might show differences in indicated humidity of 10% or more. In these devices, humidity is absorbed by a salt-impregnated paper strip attached to a metal coil, causing it to change shape. These changes in length (analogous to those in a bimetallic thermometer) cause an indication on a dial.

These devices use a human or animal hair under tension. The length of the hair changes with humidity and the length change may be magnified by a mechanism and/or indicated on a dial or scale. The traditional folk art device known as a "weather house" works on this principle.

Dewpoint is the temperature at which a sample of moist air (or any other water vapor) at constant pressure reaches water vapor saturation. At this saturation temperature, further cooling results in condensation of water. Chilled mirror dewpoint hygrometers are one of the most precise instruments commonly available. These use a chilled mirror and optoelectronic mechanism to detect condensation on the mirror surface. The temperature of the mirror is controlled by electronic feedback to maintain a dynamic equilibrium between evaporation and condensation on the mirror, thus closely measuring the dew point temperature. An accuracy of 0.2 °C is attainable with these devices, which correlates at typical office environments to a relative humidity accuracy of about ±0.5%. These devices need frequent cleaning, a skilled operator and periodic calibration to attain these levels of accuracy.

For applications where cost, space, or fragility are relevant, other types of electronic sensors are used, at the price of a lower accuracy. In capacitive humidity sensors, the effect of humidity on the dielectric constant of a polymer or metal oxide material is measured. With calibration, these sensors have an accuracy of ±2% RH in the range 5–95% RH. Without calibration, the accuracy is 2 to 3 times worse. Capacitive sensors are robust against effects such as condensation and temporary high temperatures.[1] Capacitive sensors are subject to contamination, drift and aging effects, but are suitable for many applications.

In resistive humidity sensors, the change in electrical resistance of a material due to humidity is measured.[1] Typical materials are salts and conductive polymers. Resistive sensors are less sensitive than capacitive sensors - the change in material properties is less, so they require more complex circuitry. The material properties also tend to depend both on humidity and temperature, which means in practice that the sensor must be combined with a temperature sensor. The accuracy and robustness against condensation vary depending on the chosen resistive material. Robust, condensation-resistant sensors exist with an accuracy of up to ±3% RH.

Besides greenhouses and industrial spaces, hygrometers are also used in some incubators (egg), saunas, humidors and museums. They are also used in the care of wooden musical instruments such as guitars and violins which can be damaged by improper humidity conditions. In residential settings, hygrometers are used to aid humidity control (too low humidity damages human skin and body, while too high humidity favours growth of mildew and dust mite). Hygrometers are also used in the coating industry because the application of paint and other coatings may be very sensitive to humidity and dew point. With a growing demand on the amount of measurements taken the psychrometer is now replaced by a dewpoint gauge known as a Dewcheck. These devices make measurements a lot faster but are often not allowed in explosive environments.

Humidity measurement is among the more difficult problems in basic meteorology. According to the WMO Guide, "The achievable accuracies [for humidity determination] listed in the table refer to good quality instruments that are well operated and maintained. In practice, these are not easy to achieve." Two thermometers can be compared by immersing them both in an insulated vessel of water and stirring vigorously to minimize temperature variations. A high-quality liquid-in-glass thermometer if handled with care should remain stable for some years. Hygrometers must be calibrated in air, which is a much less effective heat transfer medium than is water, and many types are subject to drift[2] so need regular recalibration. A further difficulty is that most hygrometers sense relative humidity rather than the absolute amount of water present, but relative humidity is a function of both temperature and absolute moisture content, so small temperature variations within the air in a test chamber will translate into relative humidity variations.

A Gravimetric Hygrometer measures the mass of an air sample compared to an equal volume of dry air. This is considered the most accurate primary method to determine the moisture content of the air. National standards based on this type of measurement have been developed in US, UK, EU and Japan. The inconvenience of using this device means it is usually only used to calibrate less accurate instruments, called transfer standards.

A chilled mirror hygrometer measures the temperature of a mirror at the point when moisture (dew) begins to condense on it, thus giving a measurement of the dew point. These instruments can be manual or automatic, but are subject to errors from contamination due to dust and other gases which might condense. These are a common transfer standard in laboratories and metrology labs. 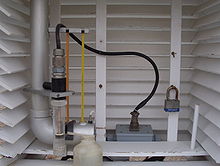 The interior of a Stevenson screen showing a motorized psychrometer 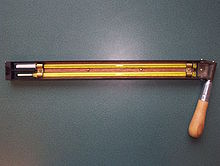 A sling psychrometer for outdoor use

Accurate calibration of the thermometers used is of course fundamental to precise humidity determination by the wet-dry method; it is also important for the most accurate results to protect the thermometers from radiant heat and ensure a sufficiently high speed of airflow over the wet bulb. One of the most precise types of wet-dry bulb psychrometer was invented in the late 19th century by Adolph Richard Aßmann (1845–1918);[3] in English-language references the device is usually spelled "Assmann psychrometer." In this device, each thermometer is suspended within a vertical tube of polished metal, and that tube is in turn suspended within a second metal tube of slightly larger diameter; these double tubes serve to isolate the thermometers from radiant heating. Air is drawn through the tubes with a fan that is driven by a clockwork mechanism to ensure a consistent speed (some modern versions use an electric fan with electronic speed control).[4] According to Middleton, 1966, "an essential point is that air is drawn between the concentric tubes, as well as through the inner one."[5]

It is very challenging, particularly at low relative humidity, to obtain the maximal theoretical depression of the wet-bulb temperature; an Australian study in the late 1990s found that liquid-in-glass wet-bulb thermometers were warmer than theory predicted even when considerable precautions were taken [6]; these could lead to RH value readings that are 2 to 5 percent points too high.

One solution sometimes used for accurate humidity measurement when the air temperature is below freezing is to use a thermostatically-controlled electric heater to raise the temperature of outside air to above freezing. In this arrangement, a fan draws outside air past (1) a thermometer to measure the ambient dry-bulb temperature, (2) the heating element, (3) a second thermometer to measure the dry-bulb temperature of the heated air, then finally (4) a wet-bulb thermometer. According to the World Meteorological Organization Guide, "The principle of the heated psychrometer is that the water vapour content of an air mass does not change if it is heated. This property may be exploited to the advantage of the psychrometer by avoiding the need to maintain an ice bulb under freezing conditions.".[7] Since the humidity of the ambient air is calculated indirectly from three temperature measurements, in such a device accurate thermometer calibration is even more important than for a two-bulb configuration.

Various researchers[8] have investigated the use of saturated salt solutions for calibrating hygrometers. Slushy mixtures of certain pure salts and distilled water have the property that they maintain an approximately constant humidity in a closed container. A saturated (Sodium Chloride) bath will eventually give a reading of approximately 75%. Other salts have other equilibrium humidity levels: Lithium Chloride ~11%; Magnesium Chloride ~33%; Potassium Sulfate ~97%. Salt solutions will vary somewhat in humidity with temperature and they can take relatively long times to come to equilibrium, but their ease of use compensates somewhat for these disadvantages in low precision applications, such as checking mechanical and electronic hygrometers.