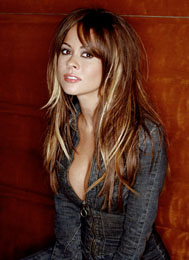 Burke was born as the first of nine children in to Donna and George Burke, she was raised in . Her mother is ish and she considers herself Jewish;

Brooke worked as a model for and . From 1999 to 2002, Burke became well-known while hosting "", a popular travel series on the , replacing previous host . As part of the series, she travelled the world extensively, profiling many popular travel destinations.Burke first appeared during her early modeling career for the website [http://www.bluenudes.com/index-brooke-n-shaul-brookeburke.html BlueNudes.com] , and most notably after gaining fame in the May 2001 and November 2004 issues of "" and has also appeared in such as "Maxim", "Stuff", and "" [ [http://www.neathage.info/2008/09/brooke-burke-dancing-with-the-neathage-star/ Brooke Burke FHM Modeling Picture 2006] [http://www.maximonline.com/slideshows/index.aspx?slideId=1999&imgCollectId=94&src=wiki Hot 100] List and featured her on their [http://www.maximonline.com/girls_of_maxim/pictures_and_bio/920/BrookeBurke.girl?src=wiki gallery] . She has voiced "Rachel Teller" in ' "", and asks the "People and Places" questions in the video game, " Unhinged".

Burke has fronted infomercials promoting a video home fitness workout named "'s Core Secrets", and appears in the first video of the series entitled "20 Minute Full Body Workout". The infomercials have screened in and .

In 2005 and 2006, Burke hosted the summer reality show "Rock Star", an ""-like series in which aspiring singers compete to become either the frontman or frontwoman for a rock band.

Brooke Burke starred as a playable character in the title and in . In 2007, she was listed as one of "Blender"'s hottest women of film and TV.

In 2007, Brooke started a company called Baboosh Baby, which offers wraps for pregnant women. The company's website features a blog from Brooke about her children. ["http://www.blender.com/guide/articles.aspx?ID=2464&src=blender_ed"]

Burke is a participant in Season 7 of "Dancing with the Stars", and is paired with . [ [http://pophangover.com/?p=417 Pophangover TV: "Meet The Dancing With The Stars Season 7 Cast"] ]

In 2001, Burke married Dr. Garth Fisher, a plastic and reconstructive surgeon at in . They have two daughters together: Neriah (b. 2000) and Sierra Sky (b. , ). Her daughter, Neriah, was named after , who is a friend of Burke's. In 2005, Fisher and Burke filed for divorce, and their divorce was finalized in 2006.

On August 21, 2006, she announced that she was engaged to actor/singer . They have two children together: a daughter named Heaven Rain (b. , ) and a son named Shaya Braven (b. , ).