I Want It That Way

I Want It That Way

Infobox Single |
Name = I Want It That Way 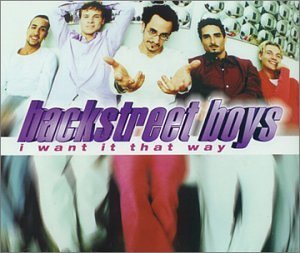 "I Want It That Way" is a song by the , from their 1999 album "Millennium". It was written by and . The song was highly played on the radio, and the video, directed by Wayne Isham, was well played on television. It was later released on the ' greatest hits album, "", in 2001. The song went on to reach the #1 spot in over 25 nations.

The single broke the record for most radio station adds in its first week with 165. It reached the #1 spot on the Billboard charts, where it stayed for 14 weeks. On the Billboard chart, it set a record for most weeks at #1. The single, however, failed to reach #1 on the , peaking at #6. The song was honored with three Grammy nominations, including one for "Record Of The Year".

The song hit big in the UK, debuting at #1 on the . "I Want It That Way" made chart history in the Netherlands being the first single ever to debut at #1 in the Top 40, without being in the "Tip Parade" first. The song also entered the charts at #1 in Italy, Spain, Canada, Austria, Switzerland and Germany.

The is set mainly at International Airport on (date filmed), and features prominent special effects scene transitions between shots. Notably, a high-speed zoom effect which makes it appear that the foreground subject has not changed to a new shot while the background has, fades in and out of white, and shifting between different film speeds during shots. Another special effects sequence using greenscreen, in which the band, dressed in white, would perform a dance sequence while being manipulated over the backdrop of an airport lobby was mostly cut from the video, as it was felt that a dance sequence did not fit with the song, though elements of the dance remain in the second chorus, as do non-dance elements that sequence. As the band prepares to board their plane, they are greeted by a crowd of screaming fans bearing signs and flowers.

* had a parody on his show called "The Gay Way", which was sung by his band The Losers.
* made a parody called "eBay".
*A parody called "Which Backstreet Boy is Gay" became an and also became misattributed to "Weird Al" Yankovic.
* [http://myboringlife.com/i_want_a_fat/babe.html I Want A Fat Babe] is a ShockWave video featuring the Backstreet Boys (referred to in the parody as the SnackTreat Boys) discovering and praising an obese woman in song and dance.
* [http://twochineseboys.blogspot.com/2005/10/i-want-it-that-way.html I Want It That Way] is a humorous video of two Beijing college students lip-synching and imitating the style of the Backstreet Boys.
*The above mentioned lip-synching students are parodied in the first episode of the first season of TV series Heroes. Two young men can be seen miming to the song in a scene featuring and in a bar.
* sent the video up in the video for their song .
* characters Josh and Parker lip-synched this song in a commercial on Nickelodeon.
* wrote a parody called "I Want in That Place" on their 2000 "Spoofernatural" album.
* sings his version [http://youtube.com/watch?v=PssBnDoexJA&mode=related&search= Danny Tanner is Not Gay] in his stand-up routine.
*The sing a parody called "I Want in My Way" on .
*, , and performed the song as a comical performance on Season 6 Tour.
* , , and of sang this song with a Japanese representative while on tour in Japan for their album .
* Cricketers , , and sang this song during the inaugural DLF tournament. [http://www.youtube.com/watch?v=Nqyygzijso8]
*Main characters, Shawn and Gus from USA Network's , played by and respectively, sing a rendition of the song while trying to block Juliet () from the spotlight during the end credits of the episode "Forget Me Not."