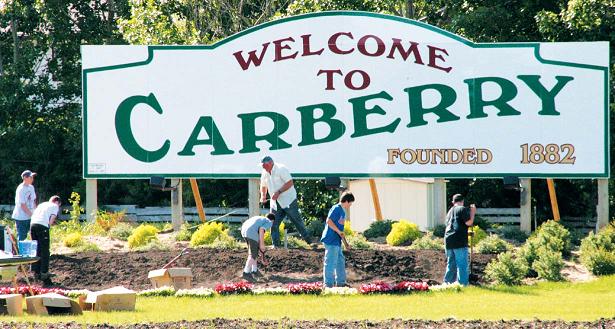 Carberry is the largest town in the in southwestern , . It is home to 1,502 [ [http://www12.statcan.ca/english/census06/data/profiles/community/Details/Page.cfm?Lang=E&Geo1=CSD&Code1=4607068&Geo2=PR&Code2=46&Data=Count&SearchText=Carberry&SearchType=Begins&SearchPR=01&B1=All&Custom=] Statistics Canada Community Profile: Carberry, MB] people and is located 50 kilometres east of .

Carberry and the surrounding Rural Municipality of North Cypress are known as "King Spud Country", a which pays homage to the high quality potatoes grown in the area due to ideal soil conditions for the crop. Many businesses in Carberry offer services and supplies to support the robust agriculture industry. Food processing makes use of locally produced crops and is a major employer in the community. A local plant owned by makes various potato products, and is a major supplier for McDonald's Restaurants in Canada and the United States as well as producing potato products that are found in other well known restaurants, grocery stores and other varied world markets. It is one of the most highly advanced plants of its kind in and normally operates 24 hours a day, 7 days a week. [ [http://strategis.ic.gc.ca/app/ccc/srch/nvgt.do?lang=eng&app=1&prtl=1&sbPrtl=&estblmntNo=101213580000&profile=cmpltPrfl] McCain Foods Carberry location profile]

Along with potatoes, the local agriculture industry is very diverse and includes other vegetable, , pulse, and industrial hemp crops as well as dairy, poultry and , among other mixed farming. [ [http://www.townofcarberry.ca/index.php?pageid=BUSCLI] TownofCarberry.ca :Business Climate]

The close proximity of Carberry to and the many unique recreational activities in the area make Carberry a popular tourist destination. Many businesses and services cater to tourists both on a seasonal and year round basis.

In the late 1760's, a small fur trading post called Pine Fort was established by independent fur traders from Montreal, south of Carberry's present site in what is now along the . At that time, a diverse group of Native peoples were travelling through the area and harvesting rich crops of beaver and other furs. Early fur trade accounts indicate that the from the south, resident and , and eastern groups such as , Ottawa and various bands were all trading or hunting in the area. Pine Fort was later taken over by the , and was eventually abandoned in 1811.

Native people continued to pass through or reside in the Carberry area and did so until the late 1870's when European settlement began to affect the landscape and game resources. The Native population in the area was eventually settled onto reserves according to treaty provisions with the Federal Government of Canada.

The town of Carberry was officially founded in 1882. It was settled primarily by settlers coming from who were of British origin, and was named after the [http://www.carberrytower.com Carberry Tower] located near , . [ [http://www.townofcarberry.ca/index.php?pageid=HISHIS] Carberry and Area History]

As is the case with most towns in the southern districts of , the present town of Carberry owes its origin mainly to the . In 1882, the CPR established a station at De Winton, a now defunct town-site about 3.5 kilometres east of Carberry's present site. At the time, several CPR officials covertly purchased much of De Winton's town-site property, hoping for large personal profits as the new town grew around the new train station. This kind of speculation was strictly against the CPR's company rules, and on discovering the violation, the rail company decided to use 100 specially-hired men to physically move the train station to the present site of the town of Carberry. The extensive and secret operation was conducted in the middle of the night and was completed in less than 12 hours. [ [http://www.townofcarberry.ca/index.php?pageid=HISHIS] Carberry and Area History] When the station reached it's new location, the town of Carberry was born. Carberry quickly grew into a prosperous town and was an important stop along the . The CPR main line route runs through Carberry to this day, however the passenger train station has since been removed.

The , another major national transportation route, was originally constructed on a routing that passed directly through the town of Carberry, which it did until the 1960's when the route was changed according to plans for it to be upgraded to a 4-lane divided high-speed highway. Many businesses were established in Carberry to service the heavy traffic on the highway, many of which still exist. Today the Trans Canada Highway is located 3km north of Carberry, and the old Trans Canada Highway route which passes directly through the town is known as PR 351 (within town limits it is known as 1st Avenue).

In 1909, a military training camp named "Camp Sewell" was established 10 kilometres west of Carberry along what is now PR 351 on the south side of the Canadian Pacific Railway line. The name of the camp was changed in 1915 to "" in honour of Major-General Sir , Canada's Minister of Militia and Defence at the time. [ [http://www.army.forces.gc.ca/cfb_shilo/history_e.htm] Canadian Forces Shilo Base History] The soldiers and support staff stationed at Camp Hughes naturally maintained very close social and economic ties with the town of Carberry which was only a short distance away. Extensive trench systems, grenade and rifle ranges, and military structures were built at Camp Hughes between 1915 and 1916, and a variety of retail stores and entertainment complexes on a double-avenued area close to the main camp formed a lively commercial midway. During , more than 38,000 troops of the trained at the camp, giving it the largest population in the province of outside of the capital city, . Many of the soldiers who were trained at the camp were involved in the infamous . [ [http://www.gov.mb.ca/chc/hrb/prov/p082.html] MB Heritage Site No. 82] The military continued to train soldiers at Camp Hughes until 1934, when troops were moved to and for financial and logistical reasons. [ [http://www.umanitoba.ca/institutes/natural_resources/canadaresearchchair/thesis/wgalbraith%20masters%20thesis%202004.pdf] W Galbraith 2004 Masters Thesis: Camp Hughes] Camp Hughes has been designated as a Provincial Heritage Site, and although the site is no longer active, it is still monitored by the .

There is a roadside park named "Camp Hughes Wayside Park" located 13 kilometres west of Carberry on the Trans Canada Highway near the west intersection with PR 351, a short distance north of the actual Camp Hughes site, named in honour of the military camp.

In December, 1940, troops of the arrived in Carberry and established the Service Flying Training School Number 33 just south of Carberry, known as . It was used to train military pilots in the vast . Thousands of military personnel from , and other Commonwealth countries were moved to Carberry for flight training. The flight training school was disbanded at the end of , and is now the present site of the processing facility.

The town is situated 20 kilometres north of , which is also located on Highway 5, designated in Manitoba as the Parks Route.

Carberry has daily scheduled passenger and courier/cargo service from Greyhound Bus Lines to points across Canada and the United States. The [http://www.brandonairshuttle.com Brandon Air Shuttle] also provides passenger service on request between Carberry and the .

Both the main line route and a branch line route run directly through Carberry. passenger service is not offered in Carberry, however trains can be accessed at the [http://www.viarail.ca/train-stations/en-station-brandon-north-manitoba.html Brandon North Via Rail Station] , located approximately 50 kilometres northwest of the community.

*The Seton Center - "a museum, art gallery & gift shop designed to celebrate the time that spent in the Carberry area"

*Carberry Plains Museum - "portrays life on the Manitoba prairies and the history of the Carberry area with various exhibits".

* - "located 20 kilometres (12.4 miles) south of Carberry on Highway 5. The Spirit Sands Desert is located within the park."

-Wilfrid Reid "Wop" May - "a World War One fighter pilot who was involved in the shooting down of the infamous German flying ace Baron Manfred von Richthofen, the . Also played a major role in the RCMP apprehension of Albert Johnson, the ."

- - "a world-renowned who was a resident of Carberry while a member of the ."

- - "a noted author, wildlife artist, founder of the , and founding pioneer of the (BSA)."