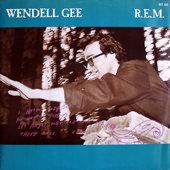 "Wendell Gee" was the third and final single issued by from their third studio album "" in . It was released in only, in two and two formats.

Wendell Gee was the proprietor of Wendell Gee's Used Cars in . He died on , , aged 69. [ [http://people2.clarityconnect.com/webpages6/ronhenry/real.htm Real People in R.E.M. lyrics] ]

Instrumentally, the song was almost entirely composed and performed by , with supplying the lyric and vocal. hated the song when it was initially recorded, claiming its only redeeming feature was his solo, and it was only included on the album at the last minute. With Buck's objections being such, the song was very rarely played live, even on the European leg of the Reconstruction tour where it had been released as a single. Buck has since revised his view of the song, saying "I must admit, I was wrong. I don't love it, but I like it." Fact|date=February 2007

All songs written by , , and unless otherwise indicated.