A Funny Thing Happened on the Way to the Moon

A Funny Thing Happened on the Way to the Moon 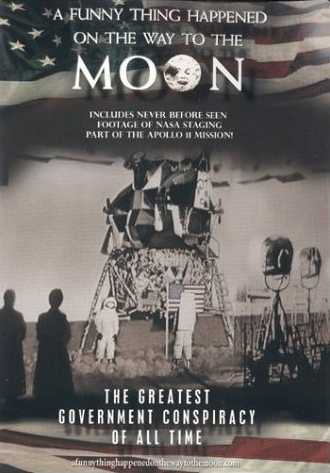 "A Funny Thing Happened on the Way to the Moon" is a 2001 documentary written, produced, and directed by -based filmmaker and investigative journalist Bart Winfield Sibrel, a critic of the space program and proponent of the theory that the six Apollo lunar landing missions between 1969 and 1972 were hoaxes perpetrated by the .

Sibrel believes that there were numerous insurmountable scientific and technical problems which made it improbable that men could land on the moon and return to Earth safely. Further, he believes that certain anomalies and inconsistencies in NASA's records of the landings point to a hoax, and that the space race was actually a race to develop armaments, citing a 95 percent similarity between the technologies that allowed the launch of s and the launch of the rockets.

Bart Sibrel claims that NASA perpetrated a fraud, because of the perception that if the United States could put a man on the moon before the did it would be a major victory in the , since the Soviets had been the first to achieve a successful space launch ( in 1957), the first manned space flight ( in 1961), and the first ( in 1965).

Bart Sibrel also claims that the life-threatening events that occurred during the mission were actually manufactured by the government to force people to pay attention to the space program. He suggests that this is proven by the claim that a number of viewers called the networks complaining that coverage of the second lunar mission, , was interrupting repeats of the "" program, saying: "it became clear that for the taxpayers, once was enough".

The 47-minute documentary primarily focuses on the , areas of intense radiation circling the , as a major reason why Sibrel believes it was impossible for a manned spacecraft to land on the moon. Bart Sibrel also presents footage shot over the course of three days of what he claims is official NASA footage that was not meant for release to the public showing. In this footage, the crew of : , Michael Collins and Edwin "Buzz" Aldrin are, according to Sibrel, staging part of their mission to make it appear that they were 130,000 miles from Earth. The illusion was allegedly perpetrated thus: a color camera was placed at the rear of the capsule, anything that could produce light was deactivated, and an insert was placed on the window to create a false terminator. Sibrel's allegation here is that it took three days for the astronauts to perfect their filming techniques rather than travel to the moon. Moreover, he contends that there is "" clearly visible in the window after the lights were turned back on and that this proves that Apollo 11 was in low Earth orbit.

"A Funny Thing Happened on the Way to the Moon" also examines the still photographs and points out what it claims are , such as non-parallel shadows, to support the assertion that multiple artificial lighting sources were used; sped-up video footage of the astronauts walking on the lunar surface and lunar rovers driving on the surface are also used to advance the theory they were actually filmed on Earth and slowed down to simulate the moon's lower gravity. The lack of visible stars is another point stressed by Bart Sibrel.

"A Funny Thing Happened on the Way to the Moon" was narrated by a British stage actress named Anne Tonelson. Bart Sibrel himself makes no appearance in the film. He does appear prominently in the similarly-toned Fox Television Network special, "Conspiracy Theory: Did We Land on the Moon?"

Bart Sibrel also alleges that the "" was far simpler than the government claimed it was, and that tests were artificially manipulated to, according to the , fool the Soviets about U.S. military readiness.

Jim McDade, writing in the "", characterized "A Funny Thing Happened on the Way to the Moon" as "full of falsehoods, innuendo, strident accusations, half-truths, flawed logic and premature conclusions."

Sibrel has also gained some national exposure as an alleged astronaut stalker [cite news
last = Kuntzman
first = Gersh
title = Moon Stalker
publisher = Newsweek
date = 2002-09-16 ] . One infamous incident was with Buzz Aldrin. Sibrel asked Aldrin to put his hand on a Bible and swear that he walked on the moon and when Aldrin refused, Sibrel called Aldrin a coward, liar and thief. This led to an angry Aldrin punching Sibrel in his face.