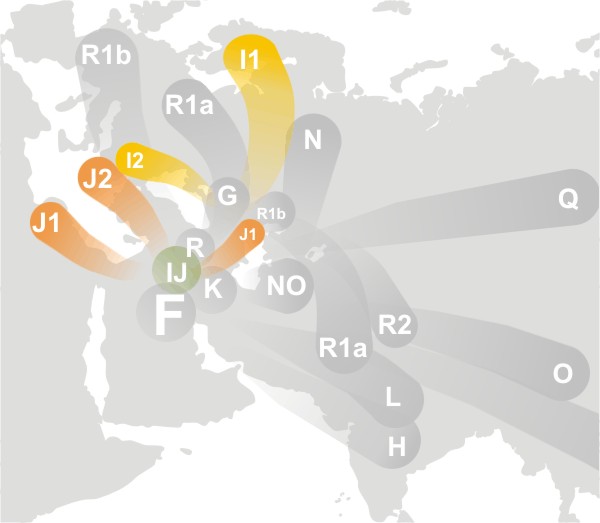 Haplogroup J is found in greatest concentration in the and . Outside of these regions, haplogroup J has a moderate presence in Southern Europe (especially in central and southern Italy, Greece, and Albania), , and , particularly in the form of its subclade J2-M172. Haplogroup J is also found in and the , particularly in the form of its subclade J1-M267. Subclades J2a and J2a1b1 are found mostly in Greece, Anatolia, and southern Italy.

The s of Haplogroup J with their defining mutation, according to [http://www.isogg.org/tree/ISOGG_YDNATreeTrunk.html the 2006 ISOGG tree] :

Haplogroup J1 appears at high frequencies among populations of the , , , and . J1 was spread by two temporally distinct migratory episodes, the most recent one probably associated with the diffusion of Muslims from Arabia since the 6th century CE.

J1 is generally frequent amongst of the southern , i.e. Palestinian Arabs (38.4%) (Semino et al.) and Arab (62% and 82% in Negev desert Bedouins). It is also very common among other Arabic-speaking populations, such as those of Algeria (35%), Syria (30%), Iraq (33%), the , and the . The frequency of Haplogroup J1 collapses suddenly at the borders of Arabic countries with mainly non-Arabic countries, such as Turkey and Iran, yet it is found at low frequency among the populations of those countries, as well as in , and the . It entered with the spread of Semitic speakers (11% Eritrea & 9 % Ethiopia & Ethiopia-Amhara 33.3%). It spread later to North Africa in historic times (as identified by the motif YCAIIa22-YCAIIb22; Algerians 35.0%, Tunisians 30.1%), where it became something like a marker of the Arab expansion in the early medieval period (Semino et al. 2004). Researchers believe that marker DYS388=17 (Y DNA tests for - Short Tandem Repeater) is linked with the later expansion of Arabian tribes in the southern Levant and northern Africa (Di Giacomo et al. 2004).

Haplogroup J1 is found almost exclusively among modern populations of the , , and the , essentially delineating the region popularly known as the and associated with speakers of and . The distribution of J1 outside of the Middle East may be associated with Arabs and Phoenicians who traded and conquered in Sicily, southern Italy, Spain, Azerbaijan, Turkey, and Pakistan, or with s, who have historical origins in the Middle East and speak (or historically spoke) a Semitic language, though typically Haplogroup J2 is more than twice as common among Jews. In Jewish populations overall, J1 constitutes 19.0% of the Ashkenazim results and 11.9% of the Sephardic results (Semino et al. 2004)(Behar et al. 2004). Haplogroup J1 with marker DYS388=13 is a distinctive type found in eastern Anatolia (Cinnioglu et al. 2004).

The technical details of M304 are: