A Time to Kill (film)

A Time to Kill (film) 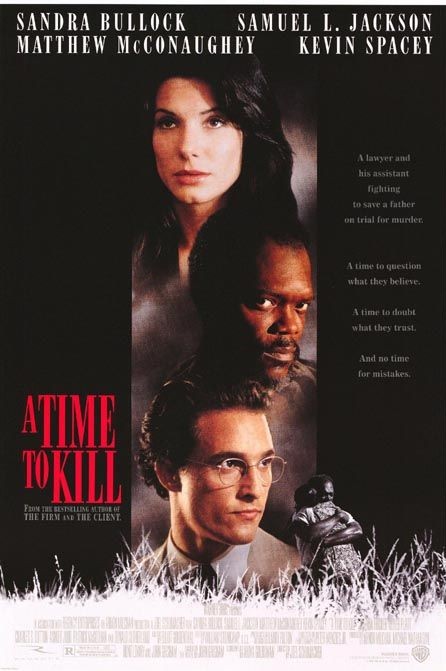 "A Time to Kill" is the name of the 1996 feature film adaptation of 's "". The movie was regarded as a commercial success, taking nearly $110 million at the box office. [ [http://boxofficemojo.com/movies/?id=timetokill.htm "A Time to Kill" at Box Office Mojo"] .]

Set in , the film revolves around the rape of a young girl and the subsequent arrest and assassination of the rapists by the girl's father, Carl Lee Hailey. The remainder of the film then focuses on the trial of Carl Lee Hailey for murder.

Two white racist men (actors and ) come across a 10-year-old black girl named Tonya (Rae'Ven Larrymore Kelly). They violently rape and beat Tonya and dump her in a nearby river, after a failed attempt to hang her, but she survives to report the crime and the men are arrested. Word spreads of the brutal rape.

Tonya's father, Carl Lee Hailey (), seeks out Jake Brigance (), an easygoing white lawyer. Carl Lee is worried that the men may be acquitted, due to deep-seated . Brigance admits the possibility as they both remember a similar case in the Mississippi Delta where four white teenagers were acquitted of raping a black girl some time before. Hailey acquires an , goes to the county courthouse and opens fire, killing both rapists and unintentionally injuring Deputy Looney (Chris Cooper), with a . Carl Lee is soon arrested without resistance.

Brigance agrees to provide defense for Hailey for a much smaller amount of money than such a trial would usually require. He intends to enter a plea of not guilty by reason of temporary insanity. The rape and subsequent revenge killing gain national media attention, and the begins to organize in the area. A brother of one of the dead rapists, Freddie Lee Cobb (), calls Brigance and his family with death threats and organizes the formation of a clan in the county. The district attorney, Rufus Buckley (), decides to seek the . Presiding Judge Omar Noose () denies Jake a change of venue to a different county.

Jake seeks help for his defense team from sleazy lawyer Harry Rex Vonner (). He seeks guidance from long-time liberal activist Lucien Wilbanks (), a great lawyer who was for violence on a line. Jake's secretary, Ethel (), is wary of the racially explosive case.

Jake is approached by Ellen Roark (), a fiery liberal law student from who belongs to the . At first Jake is reluctant to accept Ellen's cooperation, but later agrees to let Ellen help with the case.

The begins amid much attention from the media and public. The , who has a member inside the sheriff's department, burns a cross on Jake's lawn, forcing Jake to send his wife and young daughter away while the trial continues. As the trial begins, the KKK march down Canton's streets, meeting a large group of mostly black protestors at the courthouse. Chaos ensues outside the courthouse as the police lose control of the crowd. A black teenager hits the KKK , portrayed by , with a , burning him to death.

Jake's attraction to Roark grows, and nearly begin an affair before Jake gains his wits and goes home - to find that arsonists have burned down his house. The next morning, Jake sits on the still-smoking steps of his house and meets with Harry Rex, who says it is time to quit the case. Jake refuses, saying that to quit now would make his sacrifices meaningless.

When the jury secretly discusses the case in a , against the judge's instructions, all but one are leaning toward a , and Carl Lee's looks sealed.

Soon after, Freddie Lee Cobb shoots at Jake as he exits the courthouse, but misses and hits a national guardsman policing demonstrations. That evening after leaving Jake's office, Roark is abducted by Klansmen working with a racist sheriff's deputy, Willie Hastings (). Roark is beaten, tied to a stake in the wilderness, and left to die. She is saved by the informant "Mickey Mouse," whose identity is revealed as one of the Klansmen, Tim Nunley (), working with Cobb.

Jake goes to see Roark in a hospital and feels guilty for the situation. He returns to his office and is startled by his wife, (), who has returned and tells Jake she now understands why he took on the case - because he would have done the same as Carl Lee had it been their daughter who was raped.

Out of options, Jake goes to see Carl Lee in his cell and advises accepting a lesser guilty plea. Carl Lee refuses, telling Brigance that his views on justice and race are wrong. "America is a wall," he says, "and you're on the other side."

The courthouse is packed to see the attorneys' closing arguments. Jake tells the jury to close their eyes and listen to a story. He describes, in slow and painful detail, the rape of a young 10-year-old girl, mirroring the story of Tonya's rape. His final comment to the jury is to tell them to imagine the victim was white.

Hours later, after , an African American child runs out of the courthouse and screams "He's innocent!" ensues amongst the supporters outside. Sheriff Ozzie Walls () arrests Freddie Lee, his racist deputy Willie Hastings, and a called "Winston" ().

Jake brings his wife and daughter to a family cookout at Carl Lee's house. Carl Lee is surprised and standoffish. Jake explains, "Just thought our kids could play together," and Carl Lee smiles.

has worked with director before on the film adaptation of "" with and . While only his book was the basis for his involvement with that film, Grisham took an active role in this film's production as a producer. The reason, as Grisham explained it, was that "A Time to Kill" was his first book and the favorite one out of all of his works, and he wanted to see its adaptation done to his standards.

Before the part of Jake Brigance went to , other actors, such as , , , and , were considered. had lobbied for the part and was close to being cast, but Grisham axed Costner because the actor wanted complete control of the project. McConaughey was originally going to play Freddie Lee Cobb, but put his hat in the ring by speaking to and convincing him to let him audition. Schumacher videotaped the audition and decided that McConaughey was right for the part. He then approached Grisham and showed him the audition, which sold Grisham on casting him.

was the original choice for the role of Judge Omar Noose. However, was cast when Dern proved unavailable.