Szechuan cuisine, Sichuan cuisine, or Szechwan cuisine (Chinese: 四川菜; pinyin: Sichuancai or Chinese: 川菜; pinyin: chuancai) is a style of Chinese cuisine originating in the Sichuan Province of southwestern China famed for bold flavors, particularly the pungency and spiciness resulting from liberal use of garlic and chili peppers, as well as the unique flavour of the Sichuan peppercorn (花椒). Peanuts, sesame paste, and ginger are also prominent ingredients in Szechuan cooking.[1] Although the region is now romanized as Sichuan, the cuisine is still often spelled Szechuan or Szechwan in North America. There are many local variations of Sichuan cuisine within Sichuan Province and the Chongqing Municipality, which was politically part of Sichuan until 1997. The four best known regional sub-styles are Chongqing style, Chengdu style, Zigong style, and Buddhist vegetarian style.[1] UNESCO has declared the city of Chengdu to be a city of Gastronomy in 2011, mainly because of its Szechuan style of cooking.[2]

Sichuan cuisine originating from Sichuan, China is sometimes known as "heavenly country" due to its abundance of food and natural resources. Based on at least one ancient Chinese account, "people of Sichuan uphold good flavor, and they are fond of hot and spicy taste."[3] Despite Sichuan cuisine reputation as being spicy, only a small portion of the food is spicy and according to at least one Chinese culinary writer the Sichuan cuisine is composed of seven basic flavors: Sour, pungent, hot, sweet, bitter, aromatic, and salty. Generally throughout its history, there have been five different type of Sichuan foods: Sumptuous banquet, ordinary banquet, popularized food, home-style food, and food snacks. Sichuan cuisine has changed little over the years and remains a staple of Chinese cuisine.[3] 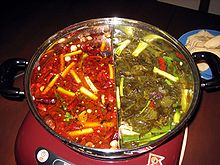 Common preparation techniques in Szechuan cuisine include stir frying, steaming and braising, but a complete list would include more than 20 distinct techniques. Beef is somewhat more common in Szechuan cuisine than it is in other Chinese cuisines, perhaps due to the prevalence of oxen in the region.[4] Stir-fried beef is often cooked until chewy, while steamed beef is sometimes coated with rice flour to produce a very rich gravy. Sichuan cuisine also utilizes various bovine and porcine organs as ingredients such as intestine, arteries, the head, tongue, skin, and liver in addition to other commonly utilized portions of the meat. 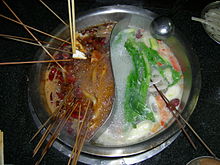 Some well-known Szechuan dishes include Gongbao or Kung Pao chicken[1] and Twice Cooked Pork. Although many dishes live up to their spicy reputation, often ignored are the large percentage of recipes that use little or no hot spices at all, including dishes such as Tea Smoked Duck.

In the following table, if there is a difference between the two, simplified Chinese will be presented first, followed by traditional Chinese, and finally pinyin.