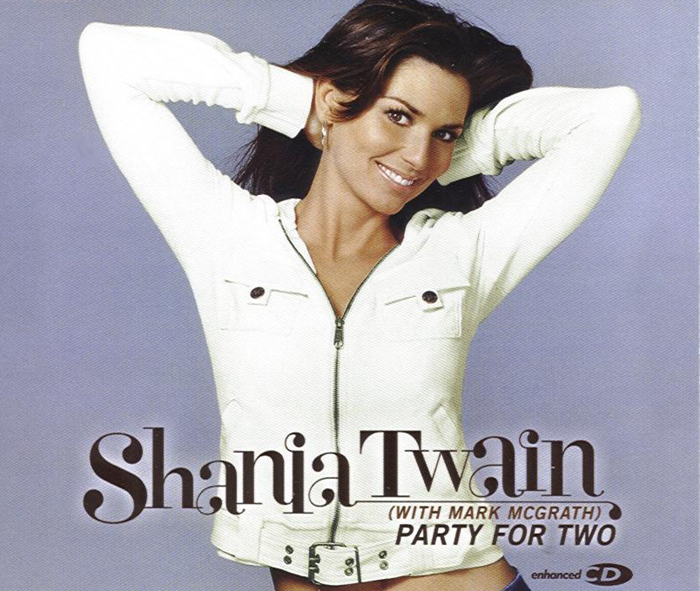 
5"
3.5"
Vinyl Single
Recorded = 2004
Genre = Pop, Country
Length = 3:25
Label = Mercury Nashville
Writer = Robert John "Mutt" Lange,
Shania Twain
Producer = Robert John "Mutt" Lange
Certification = Gold (U.S.)
Misc = Extra chronology
Artist = North American
Type = singles
Last single = ""
(2004)
This single = "Party for Two"
(2004)
Next single = ""
(2005)Extra chronology
Artist = International
Type = singles
Last single = "Up!"
(2004)
This single = "Party for Two"
(2004)
Next single = ""
(2005)Extra chronology
Artist = Billy Currington
Type = singles
Last single = "I Got a Feelin'"
(2004)
This single = "Party for Two"
(2004)
Next single = ""
(2005)"Party for Two" is a song by Canadian singer . It was the first single from her 2004 "Greatest Hits" album. The song was written by and Twain. Two versions of "Party for Two" were recorded: a pop mix with and a country version with . The song was released to country, AC, pop, European, and other world markets. The original release date was . It proved to be quite a success for Shania, as it was her third highest debut on the Billboard country charts, and a huge single in Europe. As well in Europe, DJs jumped all over the song and remixed it for club play, also making the song one of her most remixed. [http://www.mp3search.ru/album.html?id=28962 "Party for Two" remixes] Commercial singles were released in Germany on , in Canada on , and in the UK on . In 2005, "Party for Two" was certified as a gold single for 100 000 digital downloads, making it Twain's first single to be downloaded this many times. [http://www.riaa.com/gp/database/default.asp RIAA website]

"Party for Two" debuted on the "Billboard" Hot Country Singles & Tracks chart the week of at number 39, Twain's third highest debut of all time [http://www.billboard.biz/bb/biz/archivesearch/article_display.jsp?vnu_content_id=1000627358 Billboard.biz] , and highest of the week. The single spent 20 weeks on the chart and climbed to a peak position of number seven on , where it remained for one week. "Party for Two" became Twain's sixteenth top ten single and twenty-second (seventh consecutive) top twenty single. It also peaked at number 58 on the and 57 on the chart.

At radio, "Party for Two" debuted at number 36, the highest debut of the week, on . The single spent 19 weeks on the chart and climbed to a peak position of number 16 on , where it remained for two non-consecutive weeks. "Party for Two" became Twain's ninth consecutive top twenty single.

"Party for Two" proved to be successful internationally. In the UK it debuted at its peak position at number ten, making it her ninth top ten single. It first appeared on and remained on the charts for nine weeks. [http://www.chartstats.com/songinfo.php?id=26081 Chart Stats] The song would have peaked much higher if it were released before the album was, however it was sent out two weeks later, when most people already had the song. It is also the best selling country single in the United Kingdom so far in the 21st century. In Canada, "Party for Two" held the top spot on the airplay chart for six weeks, and hit number two on the sales chart, held off only by 's "". In all "Party for Two" hit the top ten in six countries: Austria, Canada, Denmark, Germany, Portugal and the UK.

*AThe Pop 100 chart was created while "Party for Two" was moving down the charts.