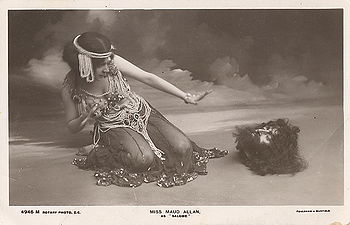 Maud Allan as Salomé with the head of John the Baptist.

She was born Beulah Maude Durrant in Toronto, Ontario, Canada. Sources give contradictory dates for her year of birth, ranging from 1873 through 1880. She spent her early years in San Francisco, California, moving to Germany in 1895 to study piano at the Hochschule für Musik in Berlin. She later changed her name, prompted in part by the scandal surrounding her brother Theodore Durrant, who was hanged in 1898 for the sensational murder of two women in San Francisco. Allan never recuperated from the trauma of this event which affected her for the rest of her life. The execution was immediately followed by her abandonment of piano-playing and the development of a new means of self-expression in dance.

In 1900, in need of money, Allan published an illustrated sex manual for women titled Illustriertes Konversations-Lexikon der Frau. Shortly thereafter she began dancing professionally. Although athletic, and having great imagination, she had little formal dance training. She was once compared to professional dancer and legend Isadora Duncan, which greatly enraged her, as she disliked Duncan.[2]

She designed and often sewed her own costumes, which were creative. In 1906 her production "Vision of Salomé" debuted in Vienna. Based loosely on Oscar Wilde's play, Salomé, her version of the Dance of the Seven Veils became famous (and to some notorious) and she was billed as "The Salomé Dancer". Her book My Life and Dancing was published in 1908 and that year she took England by storm in a tour in which she performed 250 performances in less than one year.[3]

In 1910 she left Europe to travel. Over the next five years she visited the United States, Australia, Africa, and Asia. In 1915 she starred as "Demntra" in the silent film, The Rug Maker's Daughter.

In 1918 the British MP Noel Pemberton Billing, in his own journal, Vigilante, published an article, "The Cult of the Clitoris" which implied that Allan, then appearing in her Vision of Salome, was a lesbian associate of German wartime conspirators.

Allan sued Billing for criminal libel, based on the following counts:

This led to a sensational court case, at which Billing represented himself. Lord Alfred Douglas also testified in Billing's favour. Allan lost the case. The trial became entangled in obscenity charges brought forth by the state against the performance given by Allan in her dance. She was accused of practising many of the sexually charged acts depicted (or implied) in Wilde's writings herself, including necrophilia.

At this time, the Lord Chamberlain's ban on public performances of Wilde's play was still in place in England, and thus the Salomé dance was at risk. Her brother's crimes were also dredged up to suggest there was a background of sexual insanity in her family.

From the 1920s on Allan taught dance and she lived with her secretary and lover, Verna Aldrich.[4] She died in Los Angeles, California.