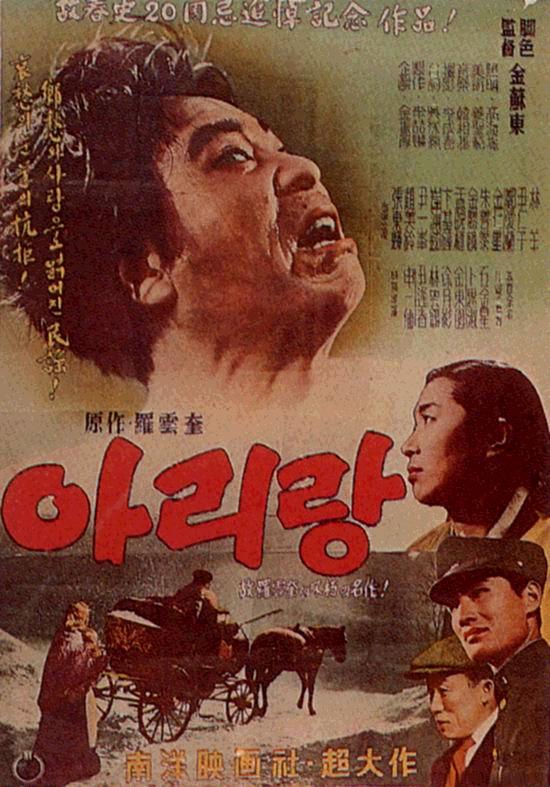 "Arirang" is a 1926 n film. One of the earliest feature films to be made in the country, it is named after the traditional song "", which audiences were said to sing at the conclusion of the film. The silent, black and white film was written and directed by (1902-1937), and stars Na Un'gyu, and . It depicts life in Japanese-occupied Korea.

The film concerns a student, Ch'oe Yeongjin, who has become mentally ill after being imprisoned and tortured by the Japanese for his involvement in the , protest against the Japanese occupation. He returns to live with his father and sister, Yeongheui in their small village home. Yeongjin's friend, Yun Hyeon'gu, is in love with Yeongheui. While the villagers are preoccupied with a harvest festival, O Kiho, a toady for the Japanese police, attempts to rape Yeongheui. Hyeon'gu fights with Kiho, striking and killing him with a sickle. When Yeongjin regains his sanity, he believes himself to have killed Kiho. The film ends with the Japanese police taking Yeongjin over Arirang hill to return to prison.

The premiere of the film at Dansung-sa theater in on , [cite book|last=Lee|first=Young-il|coauthors=Richard Lynn Greever (translator)|year=1988|title=The History of Korean Cinema|publisher=Motion Picture Promotion Corporation, Seoul|pages=p.43|id=ISBN 89-88095-12-X] caused a national sensation, and the film was soon shown throughout the country. "Arirang" became an extremely influential film in the history of Korean cinema, and started what is known as the "Golden Age of Silent Films" in Korea which continued until about 1935. It was also the first in a line of nationalist, anti-occupation films which ended with the increased repression of the national culture in the mid-1930s.

Revered to this day as a masterpiece and milestone in the history of Korean cinema, one of the sites on which the movie was filmed has recently been refashioned into a "Street of Motion Pictures," housing the Arirang Cine Center, Arirang Information Library, a small theme park claiming to be the movie set, a monument in memory of the 100th anniversary of Na Un'gyu's birth, and an annual film festival.

Along with almost all other Korean films of this era, Na Un'gyu's "Arirang" is now considered a . The original nine reels of the film are believed to have been lost during the 1950-1953 . However, a copy of the film was rumored to be in the possession of Japanese collector, Abe Yoshishige, who died in February 2005. His collection of approximately 50,000 films reverted to the Japanese government with his death, but no news has yet come forth as to whether the film was found in the collection. [cite web
title = Collector’s Death May Free Long-Lost Korean Classic Film
url = http://english.chosun.com/w21data/html/news/200502/200502110014.html
accessdate = 2008-06-27]