The Mercury is a daily newspaper, published in Hobart, Tasmania, Australia, by Davies Brothers Pty Ltd, part of News Limited and News Corporation. The weekend issues of the paper are called Mercury on Saturday and Sunday Tasmanian.

The newspaper was started on 5 July 1854 by George Auber Jones and John Davies and two months subsequently (13 September 1854) John Davies became the sole owner.[1] It was then published twice weekly and known as the Hobarton Mercury. It rapidly expanded, absorbing its rivals, and became a daily newspaper in 1858 under the lengthy title The Hobart Town Daily Mercury. In 1860 the masthead was reduced to The Mercury and in 2006 it was further shortened to simply Mercury.

After Davies' retirement in 1871, the business was carried on by his sons John George Davies and Charles Ellis Davies who later traded as Davies Brothers Ltd. John Davies died on 11 June 1872, aged 58. The company remained in the family's hands until 1988, when it was taken over by News Limited, a subsidiary of News Corporation.

The Saturday Evening Mercury, known locally as the 'SEM' was printed and circulated for readers on a Saturday evening from 1954 to 1984, it was replaced in early 1984 by the first Sunday circulations in southern Tasmania, known as the Sunday Tasmanian which still exists today.

At various stages in its history there have been limited experiments with regional papers—such as The Westerner which succeeded The West Coast Miner in 1979 to serve the West Coast until its demise in 1995—as well as suburban newspapers for the Hobart market, which appeared in various guises from 1966 until 1998. In November 2006 the company launched what it called a "newspaper in a newspaper" the Kingborough Times which appears monthly within the Sunday Tasmanian. This was followed in June 2007 by the Northern Times with news from Hobart's northern suburbs.

Since November 2001 the Editor of the Mercury and Sunday Tasmanian has been Garry Bailey.[2] 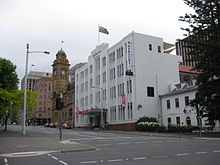 In July 2007 News Corporation approved a new $31 million press centre for Davies Brothers Pty Ltd, publisher of the Mercury and the Sunday Tasmanian. It will include the installation of the latest full-colour press.[3]

Davies Brothers will develop the centre at Technopark, north of Hobart. It will replace the 35-year-old press housed in the Argyle Street wing of the company's city site. All other operations of the newspaper group will continue to be based in the heart of the city at 93 Macquarie Street.