The Bronzeback Dendrelaphis tristis is a species of tree-snake found in South Asia. 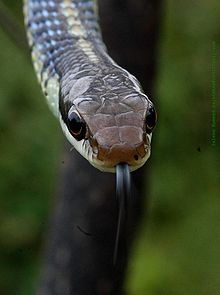 It is a long slender snake with a pointed head and a bronze coloured line running down its back. Feeds on geckos and frogs. This harmless snake prefers the tree tops to life on the ground. It is perfectly camouflaged (Made invisible by means of protective coloring ) among the leaves because of its uniform ruddy brown skin. This active snake is restless and a quick, both on the ground as well as in the trees. It springs on its prey. And feeds largely lizards and tree frogs. It also occasionally raids birds. Generally lively and plucky snake, its disposition varies from snake to snake. It is found in southern India and the Himalayan foothills in south India this perfectly harmless snake is considered fatally poisonous. This oviparous (Egg laying animal e.g. birds) snake lays its eggs between September-February. The 6-7 eggs in a clutch (number of eggs laid at a time given time) hatch 4–6 weeks after laying. And the gestation period is 4–6 months.